In Iloilo City, half of target population fully vaxxed 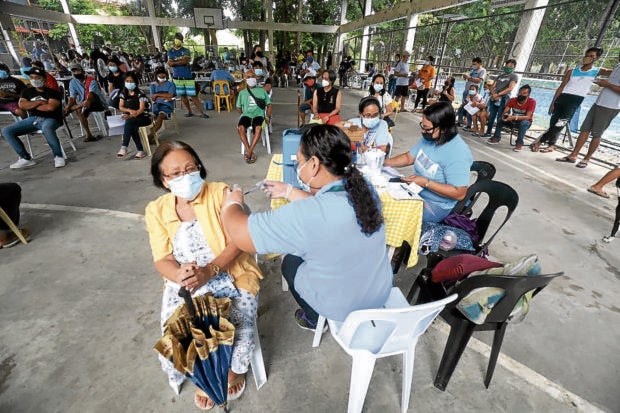 PROTECTED Residents of Barangay M.V. Hechanova in Jaro District in Iloilo City get their COVID-19 vaccine shots at their village on Sept. 7. —PHOTO COURTESY OF THE ILOILO CITY MAYOR’S OFFICE

ILOILO CITY—More than half of the target population of this city’s COVID-19 vaccination program have been fully vaccinated.

With its vaccination rollout getting closer to its goal, the city has decided to donate some 14,000 vaccine doses to neighboring towns in Iloilo province and to the island province of Guimaras, as it also prepares for the vaccination for residents age 12 to 17 years old.

The city government has also registered 60.97 percent of residents age 12 to 17 years old in preparation for the possible vaccination of minors.

“The cases in the Metro are gradually decreasing. Let us help lower the numbers by following the safety protocols. Vaccination is also ongoing and free for all,” Iloilo City Mayor Jerry Treñas said.

Aside from the seven vaccination centers, the inoculation drive is being done in barangays and house-to-house for the elderly and those with comorbidities.

Vaccination is also being done in workplaces through employers.

The city will also donate 2,000 doses each to the neighboring towns of Oton, Pavia, San Miguel, Sta. Barbara and Cabatuan, and the province of Guimaras. The city government in August opened its seven vaccination centers to nonresidents for free amid a surge in cases in Western Visayas that have strained hospitals and health workers in the city.

Local governments of neighboring towns, many with less or little resources to purchase their own vaccines, have been grateful to Iloilo City.

The municipal council of Oton in August passed a resolution lauding Treñas for the city’s “brilliant health initiatives” and his “unconditional commitment to public service” for providing free vaccines to neighboring local governments.

On Sept. 21, the Iloilo provincial board also unanimously approved a resolution “expressing utmost gratitude” to Treñas for opening the borders of the city to vaccinate nonresidents.

“Several residents of Iloilo province have availed and benefited from the aforementioned program, thus helping fast-track the rollout of vaccines …,” according to the resolution.

The Civil Service Commission in Western Visayas has earlier chosen Treñas as among three regional awardees of the Presidential Lingkod Bayan Award in the search for outstanding government workers, citing his initiatives to address the pandemic.

These included the “Ilonggo Pandesal’’ initiative, a collaboration of the city government, local bakeshops and flour producers so that 1.7 million pieces of “pan de sal” were delivered for free to residents through 240 community kitchens in the city’s 180 villages.

Another initiative is Uswag Artists Against COVID-19, an online art exhibit of works of Ilonggo artists that generated more than P3 million, part of which was used to purchase face masks for public distribution.

The mayor was also cited for the putting up of Uswag Molecular Laboratory, which fast-tracked swab tests, and for implementing mass testing. INQ