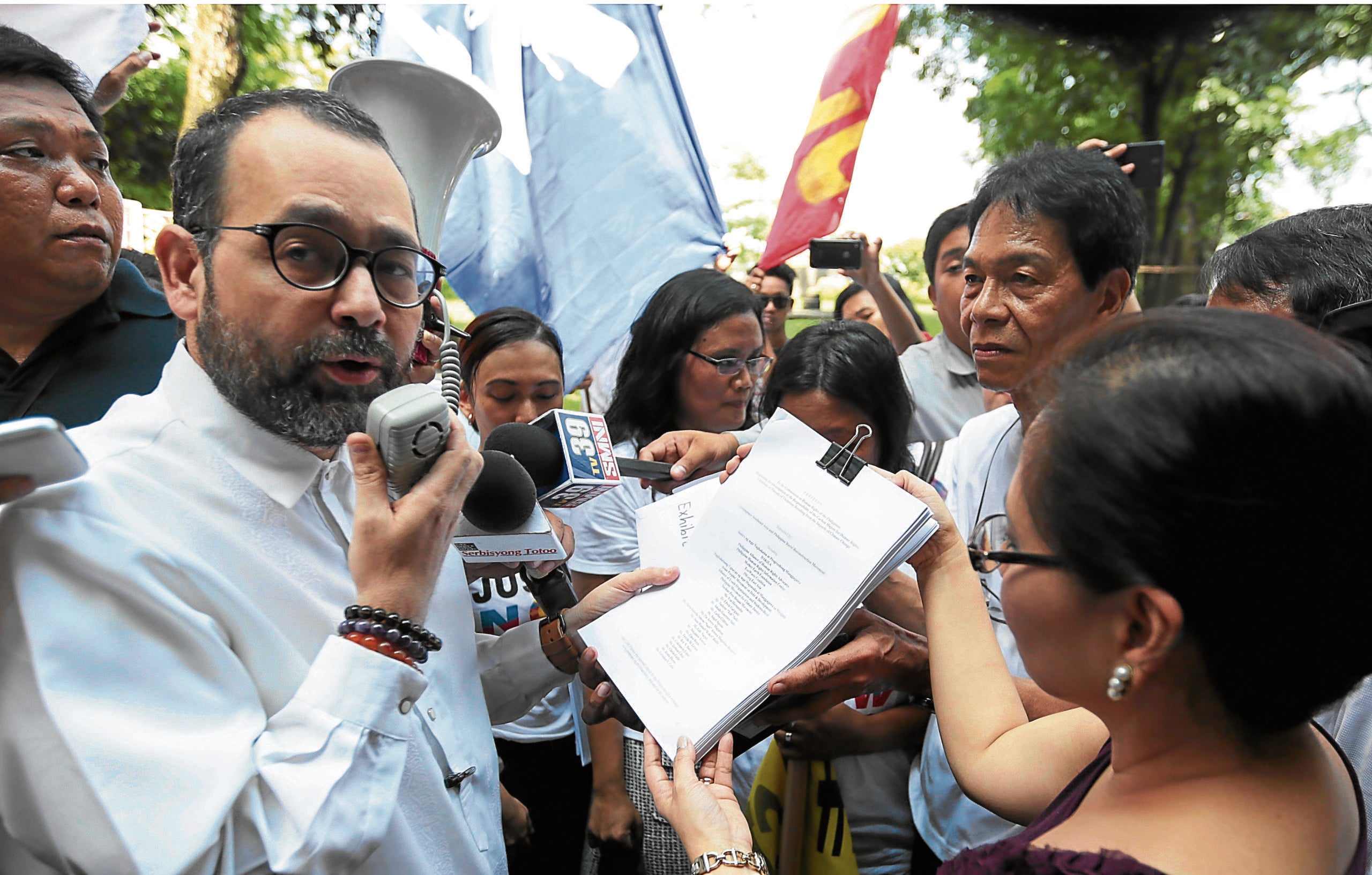 ‘LIGHT IN DARK TIMES’ The late Commission on Human Rights Chair Chito Gascon saw himself being drawn to many battles, including the fight to protect the environment. Here he receives from civil society groups a copy of their complaint asking his agency to look into the possible liability of fossil fuel companies, in a photo taken on Sept. 22, 2015. —GRIG C. MONTEGRANDE/INQUIRER FILE PHOTO

“Of your many fights, you had to lose to COVID,” Gascon’s brother Miguel said in a social media post.

With Gascon’s passing, the CHR will have Commissioner Karen Gomez Dumpit as officer in charge, the agency said.

Gascon, 57, was appointed chair of the commission in 2015 by then President Benigno Aquino III and would have completed a seven-year term in May 2022.

Aquino’s successor, President Rodrigo Duterte, proved to be Gascon’s worst critic, publicly attacking the CHR chief for being critical of and launching investigations into his bloody war on drugs.

Gascon’s death drew tributes from associates in the legal profession, fellow activists, old friends, and admirers who remembered their encounters with the man.

Vice President Leni Robredo recalled Gascon’s role in the protest movement against the Marcos dictatorship. He was chair of the student council of the University of the Philippines (UP) at the time she was studying there.

Robredo said Gascon “opened the door so that many can engage in our [struggle for] democracy.”

She also hailed the late CHR chair as a “mentor that so many looked up to.”

“He inspired many with his courage and conviction. His was a constant light in these dark times. It is now up to all of us to tend to this light,” Robredo said.

Lawyer Tony La Viña remembered Gascon’s activism in the last years of Marcos rule as a crucial part of the protest movement.

Even while at the forefront of the cause, Gascon still managed to complete his studies, finishing philosophy and law at UP and later earning a master’s degree in international law at St. Edmund’s College in the University of Cambridge.

After being catapulted to power by the 1986 Edsa People Power Revolution, then President Corazon Aquino formed a commission that drafted the 1987 Constitution, appointing Gascon as the youngest member of that body. He later served in the eighth Congress as youth sector representative.

He later assumed various positions in government, including that of education undersecretary under the Arroyo administration. He resigned, however, together with several other officials at the height of the “Hello Garci” election-fraud scandal in 2005.

Gascon later became involved in the Liberal Party as vice president for social movements. With Benigno Aquino III elected president in 2010, Gascon was back in government serving in various agencies.

In 2014, he was appointed member of the Human Rights Victims’ Claims Board, the body tasked to evaluate claims by victims of atrocities during martial law. He was appointed CHR chair the following year.

It was in this post that Gascon’s activism would again be tested, this time by the Duterte administration.

In 2017, the President threatened to abolish the CHR, while his allies in the House of Representatives made the symbolic move of approving a measly P1,000 for the commission’s budget for the following year.

Supporters of Gascon said they remembered seeing a role model of courage succumbing to tears in that Sept. 12 session, but still soldiering on while coping with an illness.

For years, Gascon was aided by a cane because of a wound on his right foot acquired from diabetes.

Despite his condition and the “unprecedented human rights challenges” in the country, Gascon still “courageously and steadfastly upheld the constitutional mandate of the commission,” said CHR spokesperson Jacqueline Ann de Guia.

“He was undaunting in the fight for human rights, rule of law and democracy out of deep reverence to the equal rights and dignity of all,” De Guia said.

Activist Fides Lim called Gascon a dedicated public servant “who never cowered in fear … despite every curse and insult of a tyrannical president since 2016.”

La Viña said Gascon’s “absolute and unconditional commitment to human rights …transcended political colors and political lines. He is mourned by everyone in the human rights spectrum as a result. That is rare.”

Sen. Risa Hontiveros said: “Chito understood the valuable link between human dignity and democracy. His activism stretched more than 30 years and I have personally witnessed him fight the good fight: defending human rights, fighting for democracy, and working for government reforms that promote accountability and the rule of law.”

Sen. Richard Gordon said he remembered working with Gascon in pushing for a human rights agenda in the Senate.

Agusan del Norte Rep. Lawrence Fortun, an old ally of Gascon in the House, said he lost a “good friend and brother.”

“This is a sad day for a country amidst imminent threats to fundamental rights and freedoms,” he said.

Justice Secretary Menardo Guevarra said Gacson’s passing should prompt closer coordination between the CHR and the government in investigating the drug war.

“Rather than hamper collaborative work between the government and the CHR, his loss will further inspire us to pursue the promotion and protection of human rights in our country,” the justice department chief said.

Former Supreme Court spokesperson Theodore Te said on Twitter: “You fought the good fight. You stood your ground and held fast. You took the fight to the enemy. You were a giant for human rights. The forest is barer because of your fall, but the seeds that you planted will yield fruit.”