Suicide bomber kills at least 55 at Shiite mosque in Afghanistan

Kunduz, Afghanistan — A suicide bomb attack on worshippers at a Shiite mosque in the Afghan city of Kunduz killed at least 55 people Friday, in the bloodiest assault since US forces left the country.

Scores more victims from the minority community were wounded in the blast, which was claimed by the Islamic State group and appeared designed to further destabilize Afghanistan in the wake of the Taliban takeover.

The extremist group, bitter rivals of the Taliban, has repeatedly targeted Shiites in a bid to stir up sectarian violence in Sunni-majority Afghanistan.

In a statement released on its Telegram channels, the Islamic State said that an IS suicide bomber “detonated an explosive vest amid a crowd” of Shiite worshippers who had gathered inside the mosque.

The statement identified the bomber as “Muhammad al-Uyguri,” implying he was a member of China’s mainly-Muslim Uyghur minority.

A medical source at Kunduz Provincial Hospital said that 35 dead and more than 55 wounded had been taken there, while Doctors Without Borders (MSF) said 20 dead and several dozen wounded were brought to its hospital.

Matiullah Rohani, director of culture and information in Kunduz for Afghanistan’s new Taliban government, confirmed to AFP that the deadly incident was a suicide attack, and said 46 people had died and 143 were wounded. 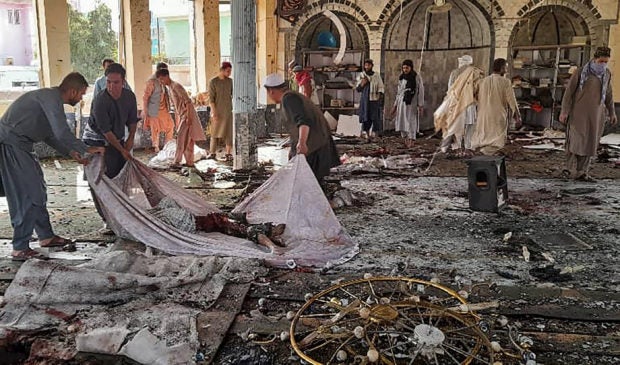 EDITORS NOTE: Graphic content / Afghan men prepare to carry the dead body of a victim inside a Shiite mosque after a bomb attack in Kunduz province on October 8, 2021. (Photo by – / AFP)

Mulawi Dost Muhammad, Taliban security chief of Kunduz, accused the attackers of trying to foment trouble between Shiites and Sunnis, and insisted there was no dispute between the movement and the minority.

“We assure our Shiite brothers that in the future, we will provide security for them and that such problems will not happen to them,” he said.

Residents of Kunduz, the capital of a province of the same name, told AFP the blast hit the mosque during Friday prayers, the most important of the week for Muslims.

One witness, Rahmatullah, said 300 to 400 worshippers were inside.

Graphic images shared on social media, and which could not immediately be verified, showed several bloodied bodies lying on the floor. Pictures showed plumes of smoke rising into the air over Kunduz.

A female teacher in Kunduz told AFP the blast happened near her house, and several of her neighbors were killed. “It was a very terrifying incident,” she said.

“Many of our neighbors have been killed and wounded. A 16-year-old neighbor was killed. They couldn’t find half of his body. Another neighbor who was 24 was killed as well.”

Aminullah, an eyewitness whose brother was at the mosque, said: “After I heard the explosion, I called my brother but he did not pick up.

“I walked towards the mosque and found my brother wounded and faint. We immediately took him to the MSF hospital.”

The attack, which comes as the Taliban seeks to consolidate its power in the country, drew condemnation from United Nations Secretary-General Antonio Guterres, who called for the perpetrators to be brought to justice.

Guterres “condemns in the strongest terms today’s horrific attack,” the third against a religious institution in Afghanistan in a week, a spokesman for the UN chief said.

“Attacks that deliberately target civilians exercising the right to freely practice their religion are violations of fundamental human rights and international humanitarian law.”

Kunduz’s location makes it a key transit point for economic and trade exchanges with Tajikistan.

It was the scene of fierce battles as the Taliban fought their way back into power this year.

Often targeted by Sunni extremists who view them as heretics, Shiite Muslims have suffered some of Afghanistan’s most violent assaults, with rallies bombed, hospitals targeted and commuters ambushed.

Shiites make up roughly 20 percent of the Afghan population. Many of them are Hazara, an ethnic group that has been heavily persecuted in Afghanistan for decades.

In October 2017, an IS suicide attacker struck a Shiite mosque in the west of Kabul, killing 56 people and wounding 55.

And last May, a series of bombings outside a school in the capital killed at least 85 people, mostly young girls. More than 300 were wounded in this attack on the Hazara community.

Michael Kugelman, a South Asia expert at the Woodrow Wilson International Center for Scholars, told AFP the Taliban would struggle to consolidate their rule unless they tackle terrorism and economic crisis.

“If the Taliban, as is likely, is unable to address these concerns, it will struggle to gain domestic legitimacy, and we could see the emergence of a new armed resistance,” he warned.

UN refugee chief Filippo Grandi told reporters in Geneva the blast was “the symptom that the implosion (of Afghanistan) may also translate into renewed insecurity.”

This, he said, means “more people killed, more terrorist attacks, more instability. And that is also something that we should all be worried about.”