BOSTON — Two wealthy fathers who were the first to face trial in the U.S. college admissions scandal were convicted on Friday of charges that they corruptly tried to buy their children’s way into elite universities as phony athletic recruits.

A federal jury in Boston found former casino executive Gamal Aziz and private equity firm founder John Wilson guilty on all charges they faced related to their payment of hundreds of thousands of dollars to secure admissions spots for their kids.

The verdict followed 10-1/2 hours of jury deliberations and four weeks of trial in a case that exposed inequalities in higher education and the lengths wealthy parents would go to secure spots for their children at top schools.

The two are among 57 people charged over a scheme in which wealthy parents conspired with California college admissions consultant William “Rick” Singer to fraudulently secure college placement for their children. 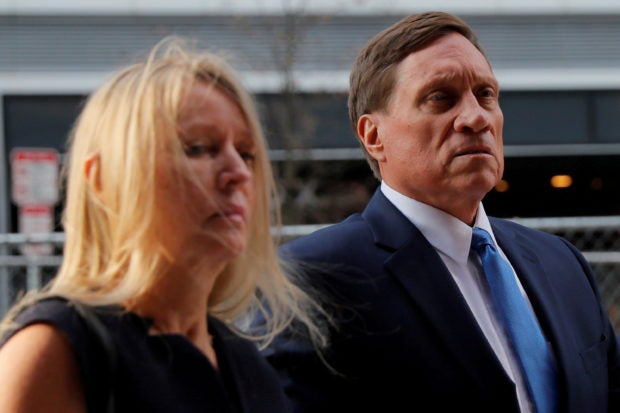 FILE PHOTO: Private equity firm founder John Wilson, charged with participating in a scheme to pay bribes to fraudulently secure the admission of his children to top schools, arrives at federal court for the first day of jury selection in the first trial to result from the U.S. college admissions scandal, which has resulted in dozens of celebrities, executives and coaches facing criminal charges, in Boston, Massachusetts, U.S., September 8, 2021. REUTERS/Brian Snyder/File Photo

Singer pleaded guilty in 2019 to facilitating cheating on college entrance exams and funneling money from the parents to corrupt coaches and athletics officials in order to secure the admission of their children as fake athletes.

They were both convicted of conspiracy to commit mail fraud and wire fraud and conspiring to commit federal programs bribery. Wilson was also convicted on six other fraud, bribery, and tax counts.

They face the prospect of years in prison when they are sentenced in February, though the longest sentence any parent has received in the scandal so far was nine months.

Both men are expected to appeal. Their lawyers contended they too were conned by Singer, who they said kept them in the dark about his scheme’s mechanics and led them to believe their money was being used for university donations, not bribes.

“It’s obviously not the result he was looking for, but that’s our system, and that’s why they have appellate courts,” said Brian Kelly, Aziz’s lawyer. “So that’s what we’ll be doing next.”

The trial hinged in large part on recordings investigators secretly obtained of the two parents with Singer, who became the chief cooperating witness in the “Operation Varsity Blues” investigation. Prosecutors did not call Singer to testify, instead relying on his recorded calls with parents.

The probe ensnared executives and celebrities including actresses Lori Loughlin and Felicity Huffman, who were among 47 defendants who agreed to plead guilty. Former President Donald Trump pardoned one parent.

Prosecutors alleged Aziz, 62, agreed in 2018 to pay $300,000 to secure his daughter’s admission to the University of Southern California (USC) as a basketball recruit.

They said he later paid another $1 million to try to fraudulently secure spots for his two daughters at Stanford and Harvard universities, an arrangement Singer in part discussed with Wilson on recorded calls while cooperating with investigators.

In a call that prosecutors played for the jury, Singer told Wilson that it “doesn’t matter” what sport they were paired with and that he would “make them a sailor or something.”

Wilson laughed and responded: “Is there a two for one special? If you got twins?”

In both parents’ cases, prosecutors said Singer and others working with him created athletic profiles used in the admissions process that included made-up information about their children.

Laura Janke, a former USC soccer coach who has admitted taking bribes from Singer, testified that he later paid her after she left the school to create a profile for Aziz’s daughter that falsified her height, team position, and accolades.