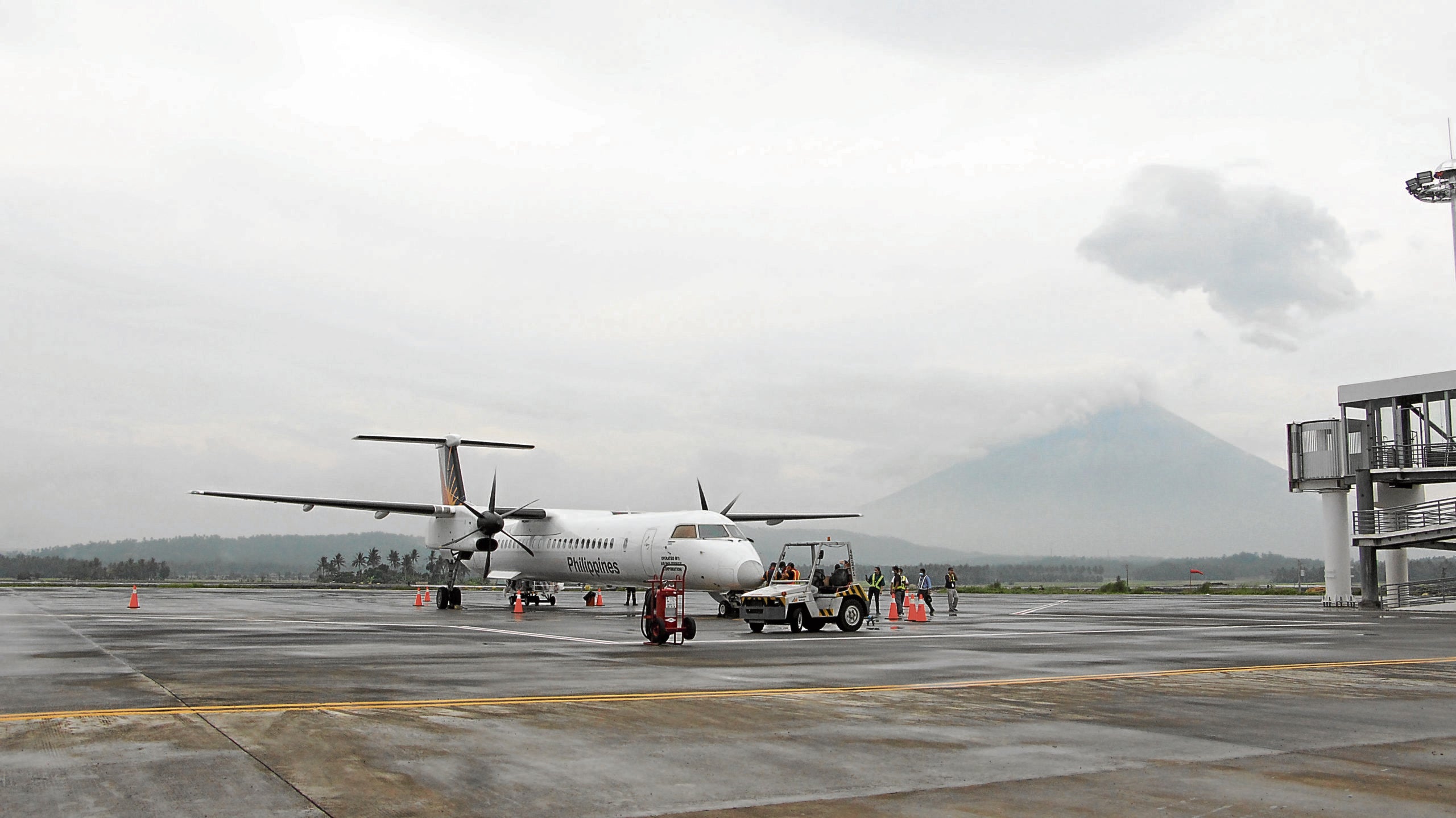 NEWEST GATEWAY Against a backdrop of cloud-shrouded Mayon Volcano, the first commercial flight landed at the Bicol International Airport at 9:58 a.m. on Friday via Philippine Airlines Flight PR2923 with 51 passengers on board. —PHOTO COURTESY OF DANICA CABALLERO/PHILIPPINE INFORMATION AGENCY BICOL

DARAGA, ALBAY — The Bicol International Airport (BIA) welcomed its first domestic flight on Friday, a day after it was inaugurated, with 51 passengers arriving from Manila on board a Philippine Airlines (PAL) flight.

Ground personnel of the P4.7-billion airport, which took 11 years to build, gave PAL Flight PR2923 a water salute after it landed at 9:58 a.m., said Erwin Montas, the airline’s branch manager here, being the first commercial flight to land at the airport.

The President arrived past 5 p.m. and made a short tour and speech before heading back to Metro Manila shortly before 6 p.m.

In his speech, Duterte blasted the New People’s Army (NPA) for attempting to stall government infrastructure projects, blaming the communist rebels for delaying the work on the BIA.

The NPA had burned down construction equipment used in the BIA. The first incident occurred on Sept. 19, 2012, when P76 million worth of equipment owned by site developer Sunwest Construction Corp. were burned down.

It was repeated on Sept. 28, 2017, when a group of rebels torched equipment owned by the Quezon City-based constructions company EM Cuerpo Builders.

The President said the NPA only showed “bankruptcy in their minds” when they resorted to burning equipment just to halt government projects.

While the project was started long before he became president, Duterte said the completion of the BIA was another milestone of his administration’s “Build, Build, Build” program.

At the ceremony, Mr. Duterte witnessed the demonstration of the features of the new contactless, self-service check-in kiosk led by Tugade and CAAP director general Capt. Jim Sydiongco.

The BIA can serve up to 2 million passengers every year, which would result in a boost in air traffic and tourist arrivals in the region.

With the iconic Mayon Volcano as its backdrop, the BIA is envisioned to be a key infrastructure that will pave the way for more tourism and livelihood opportunities in the Bicol Region, particularly the host Albay province.