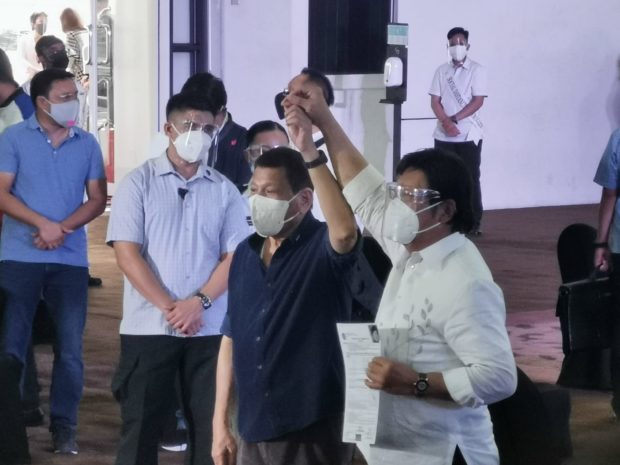 In a demonstration of his support for his allies running for Senate in the 2022 elections, President Rodrigo Duterte graces the final day of the filing of certificates of candidacy on Friday.

MANILA, Philippines — President Rodrigo Duterte on Friday graced the last day of the filing of certificates of candidacy for the 2022 elections to show his support for his allies running for senators.

He arrived at the Sofitel hotel less than two hours before the filing period closes at 5 p.m.

Former Cabinet members who are running for Senate were photographed with him and raised their hands, including:

He was also seen with Deputy Speaker Rodante Marcoleta and actor Robin Padilla.

They are all part of the slate of a faction of the PDP-Laban led by Alfonso Cusi, the Energy Secretary.

Duterte previously expressed his intention to run for the vice presidency in the 2022 elections, even going so far as signing a certificate of nomination and acceptance of the PDP-Laban.

However, he later backtracked and said he decided to retire from politics instead after he steps down as chief executive.

Senator Bong Go instead will run as the vice presidential candidate of the PDP-Laban.

The Cusi faction of the ruling party has not yet named a presidential candidate for the 2022 polls.

Read Next
Japan secures 120M more Pfizer COVID-19 vaccine doses for next year
EDITORS' PICK
Omicron variant detected in more countries as scientists race to find answers
Legarda: Ending Violence Against Women, a cause for all
Villar Group gears up for AllValue Shopping Party on Dec. 3; around P 1-million promos and discounts up for grabs
A delightful blessing!
Gov’t eyeing COVID-19 vaccine booster for essential workers, indigents by Dec. 10
Gov’t plans to open COVID-19 vaccination for 5- to 11-yr-olds by January 2022
MOST READ
Quiboloy warns of ‘much worse than Omicron virus’ if his ‘persecution’ is not stopped
Marcoleta defends pol ads on ABS-CBN
MMDA: Number coding during afternoon rush hours back this week
Two cases of Omicron variant detected in Canada, govt’ says
Don't miss out on the latest news and information.