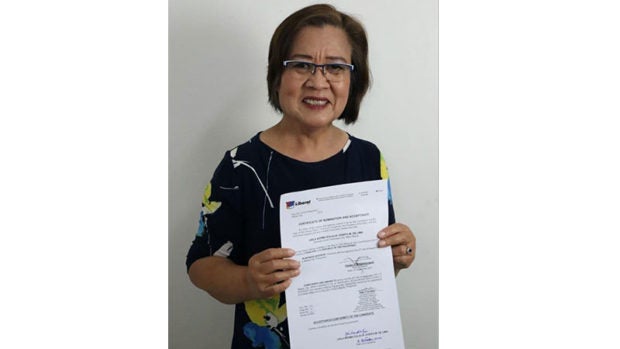 De Lima filed her COC through her representative and spokesperson, Atty. Dino de Leon, who arrived at the Harbor Garden Tent in Sofitel Hotel in Pasay City at around 10 a.m.

“I would have liked it very much to personally file my own Certificate of Candidacy for re-election as Senator of the Republic but, of course, my present situation prevents me from doing so,” De Lima said in a statement.

“Together with VP Leni [Robredo] and under her leadership, I and the other candidates of the Liberal Party and our allies, continue to represent the opposition in this country,” De Lima added.

“We present the people an alternative to the criminal government that now governs us in the most perverted sense, an alternative that should have been a continuity administration of peace, stability, and progress in 2016.”

Before venturing into politics, De Lima was a Commission on Human Rights chairperson from 2008 to 2010 during the administration of then President Gloria Macapagal-Arroyo.

De Lima also served as Justice Secretary from 2010 to 2015 under the Aquino administration.

In 2016, De Lima ran and won a senate seat after garnering 14 million votes.

She was arrested in 2017 for her alleged links in the illegal drugs trade at the New Bilibid Prison when she was justice secretary.