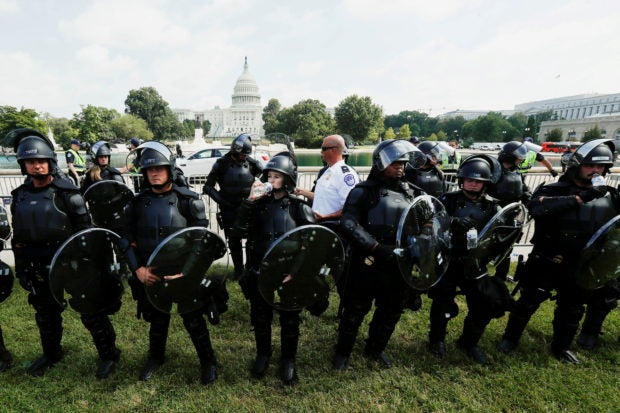 FILE PHOTO: U.S. Capitol riot police officers stand guard during a rally in support of defendants being prosecuted in the January 6 attack on the Capitol, in Washington, U.S., September 18, 2021. REUTERS/Jim Bourg/File Photo

WASHINGTON — A man from Glens Falls, New York, who prosecutors said smoked marijuana inside of the Capitol during the January 6 riot, pleaded guilty on Thursday to entering and remaining in a restricted building.

He then smoked a marijuana cigarette after entering the office of Oregon Democratic U.S. Senator Jeff Merkley, Loeb said.

Bonet could face a prison term of up to six months and a fine of between $500 and $9,500, although the judge said probation might be “an appropriate deterrent.”

In a separate case stemming from the events of Jan. 6 – which saw hundreds of supporters of Republican then-President Donald Trump storm the seat of Congress – a U.S. Marine officer accused of taking part in the riot was given access to a security video that his lawyer had argued he should be able to review.

Christopher Warnagiris, 40, is believed to be the first active duty U.S. military officer to be charged in connection with the riot, a law enforcement official said.

Warnagiris and his defense lawyer were ordered to treat the video as “highly sensitive” by Judge Paul Friedman.

Warnagiris, a U.S. Marine major from Woodbridge, Virginia, is facing nine riot-related criminal counts. Prosecutors allege Warnagiris entered the Capitol by pushing through a line of police guarding the building and that he positioned himself in a doorway and pulled others inside.

Warnagiris is pleading not guilty to the charges. A further hearing was set for Jan. 7.

About 40 U.S. military veterans have been charged over their part in the day’s events, as well as four military reservists, according to the official.