Woman who talks to God, ‘rose from the dead’ twice, files COC for president 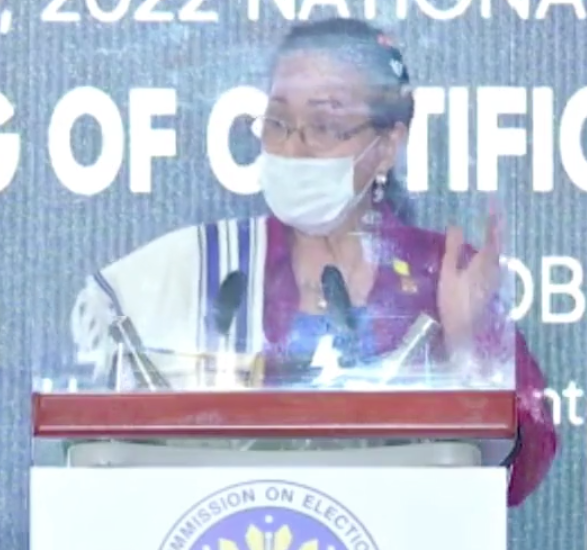 MANILA, Philippines — A woman who claimed to have died and risen from the dead twice filed on Thursday a certificate of candidacy (COC) for president in the upcoming 2022 elections.

Independent candidate Ma. Antonia Aquino — not related to the political Aquino clan — also claimed to have had a conversation with God, who supposedly told her to pursue her political bid.

“Two nights ago, ako po ay kinausap ni Yahweh Elohim, sinabi po niya sa akin: pursue, overtake them, and recover all,” she said in a speech after filing her COC in Harbor Garden Tent in Sofitel hotel in Pasay City.

(Two nights ago, Yahweh Elohim talked to me, then told me: pursue, overtake them, and recover all.)

“I stand here not by any other party. My handler is the living God and the Holy Spirit,” she added.

Aquino also claimed to have died twice but was resurrected.

(Standing before you is someone who has died twice, but resurrected to life, and also had a stroke nine times.)

(I was cured by the living God. But why? For such a time as this! We need to take a stand not to mock the election, but to declare the Word of God.)

She is not the first Aquino to have filed a COC for next year’s elections.

On Sunday, Luz “Lala Ganda” Aquino filed her COC for senator through a representative.

On the other hand, candidates bearing the surname of dictator Ferdinand Marcos and his son, a defeated vice presidential candidate and presidential aspirant Bongbong Marcos, filed their COCs.

The filing of COCs is set to close on Friday, October 8.