‘Falsus in unum, falsus in omnibus’ (false in one thing…) 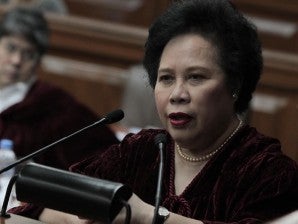 If prosecutors lied about the bank records of Chief Justice Renato Corona, could they also be lying about the rest of their allegations against him?

This possibility emerged Tuesday over the unresolved issue on whether the prosecution had introduced fake documents to the impeachment court in an effort to remove Corona from office.

Citing the legal maxim falsus in unum, falsus in omnibus (false in one thing, false in everything), Senator Miriam Defensor-Santiago cautioned prosecutors to “be extremely, extremely careful… because you might be treading on thin ice.”

Santiago refused to let go of the issue that Corona’s bank records might have been leaked.

Prosecutors had submitted what appeared to a witness to be “fake” copies of such records, which prompted the Senate to subpoena the Chief Justice’s bank documents.

Representative Reynaldo Umali earlier claimed that he got his copy of the documents from a “small lady” at the Senate, while Representative Jorge Banal said someone had left a similar document at the gate of his house at St. Ignatius Village in Quezon City.

“The importance of this topic in our impeachment proceedings might overshadow the need to hurry and finish the impeachment trial because if we can prove, if there is proof on record, that a specimen signature card was falsified,” Santiago manifested, “then perhaps the court might lean towards considering the maxim falsus in unum, falsus in omnibus.”

Santiago said this “very serious and basic principle in evidence” was the reason senator-judges had been spending time determining whether the bank documents submitted by prosecutors were fake or authentic.

In Monday’s trial, Pascual Garcia III, Philippine Savings Bank (PSBank) president, testified that there were 42 “points of difference” between the original signature cards and those in the possession of prosecutors.

Garcia said that purported Corona signatures appearing in the prosecution’s copy had “visible tremors indicating inconsistent pressure and possible tracing and the lines are thinner indicating the use of a ballpoint.”

Santiago yesterday reminded prosecutors that “it is a crime to knowingly introduce in evidence in any judicial proceedings such a falsification.”

She cited a 2010 Supreme Court ruling, which outlined the elements of falsification of commercial documents such as an “alteration or a change or intercalation or insertion on (a) document.”

Santiago said there was no need for the impeachment court to summon a handwriting expert to settle the issue of falsification.

“We don’t need a handwriting expert because jurisprudence tells us (that) mostly courts disregard what a handwriting expert says and it’s up to the judge to determine for himself usually whether what he is seeing before him are, as described by the penal code, changes or insertions that tend to give a different meaning to the document,” she said.

On Monday, Santiago blasted Banal and Umali, but heaped praises on Annabelle Tiongson, the manager of PSBank’s Katipunan branch. Tiongson earlier testified that she had been approached by Banal with leaked documents but did not assist the congressman.

“You are acting pursuant exactly to the language of the law,” she told Tiongson, “unlike a lawmaker who, although a lawmaker, was already a lawbreaker.”

“Perhaps people should read the law more carefully, particularly when they are entrusted with making the law,” the senator added.

“If a person is found in the possession of a signature card relating to a foreign currency deposit … he cannot say without more evidence that he does not know how it came to his possession because then the law steps in and raises the disputable presumption that he was the thief of that signature card.”