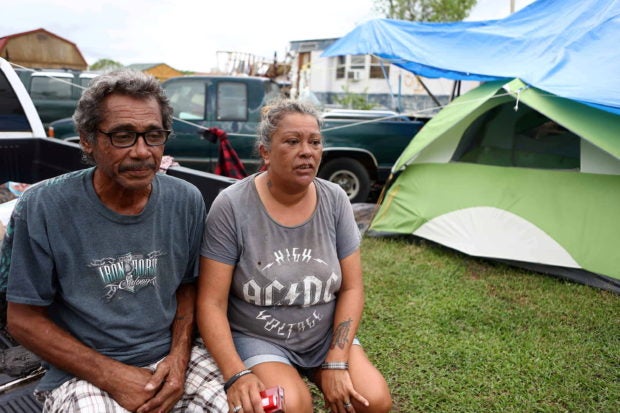 Bruce Westley sits with his wife Christina near the tent that they both currently live in while their trailer in the background has been destroyed a result of Hurricane Ida in Houma, Louisiana, U.S., October 2, 2021. REUTERS

“For more than a month, that’s been our bedroom, our living room and our kitchen,” said the 65-year-old disabled Navy veteran. He and his wife Christina are among thousands of southeast Louisianians struggling more than a month after Hurricane Ida swept through the heart of Cajun country.

Reuters traveled the bayous of hard-hit Terrebonne, Lafourche, Jefferson and Plaquemines parishes in recent days, speaking with more than 40 residents. All said they felt abandoned by state and federal officials. A few said they had not received any type of support from any level of government.

“We can’t keep living like this,” Westley said. “We just need any damn thing to get off the ground, man.”

In most areas it looked as if Ida rolled through only a day or two ago. Old timers who say they’ve seen it all swear they have never witnessed a more destructive storm.

A Federal Emergency Management Agency (FEMA) spokesman said the agency was working as quickly as possible. Louisiana’s Governor John Bel Edwards on Monday announced a temporary sheltering program supported by FEMA that he said would start bringing trailers into the hardest-hit areas to alleviate housing shortages.

The human misery and the piles of debris testify to the massive strain on public and private resources in a hurricane-prone area. The scenes also raise questions about how the United States will cope as climate change creates a new, more destructive normal.

Reuters saw no heavy equipment, trucks or workers helping people clear the rubble and recover their belongings. The only government presence was in the form of law enforcement officers and staff at FEMA mobile centers processing disaster claims. Residents said it has basically been that way since Ida made landfall on Aug. 29 and killed 26 people, though roadways in the area were largely cleared of debris.

Hundreds of people, many of them elderly and children, were in tents. Others were in homes that clearly have severe structural damage and where mold, which can impact respiratory health and cause severe allergic reactions, was spreading.

Grocery stores, most restaurants and other businesses remain closed. Power is still out for thousands of people and many have no water or sewage services.

Despite the difficulties, communities are trying to band together. Outside the Howard Third Zion Travelers Baptist Church just two blocks down from where Westley and his wife are camping, volunteers say they have been handing out meals to 1,000 families daily. Ida destroyed the church’s south-facing wall.

“You want to know what’s been going on to help these people? Pretty much nothing,” said Talisa Clark, a community activist for the historically Black area who has been helping coordinate the food distribution. “There are no state or federal boots on the ground to help. It’s looking like a Third World country’s efforts down here.”

Clark was forced out of her badly damaged home near Houma and has been staying with relatives.

Parish officials for Terrebonne, Lafourche, Jefferson and Plaquemines did not respond to a request for comment.

John Mills, a Federal Emergency Management Agency (FEMA) spokesman at a support site in Golden Meadow, Louisiana, said he understood the frustrations of those who survived Ida.

“Families and communities will have to face difficult choices about how to rebuild – and whether to rebuild here at all,” he said.

FEMA is distributing money so people can rent housing for at least two months. In addition, as of Monday FEMA said it was paying hotel costs for nearly 8,000 families. In total, it estimates it has spent at least $30 million in hotel costs.

“That plan probably works under most circumstances. But the breadth of Ida’s damage is so huge, that there’s no housing stock, there’s no hotel rooms available,” said Tanner Magee, a state representative whose district includes Terrebonne parish.

State and parish governments have contracted out the task of picking up debris, but have struggled with even deciding on where they will put it, Magee said. He said far more workers and trucks were needed in hard-hit areas.

Magee and his family, who live in Houma, are staying in his Ida-damaged home. 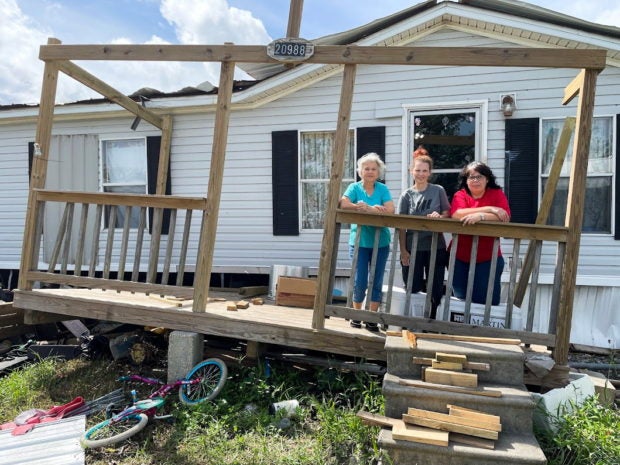 Rosie Verdin, along with her daughters Gabrielle Rosenberger (middle) and Nathanie Verdin, pose for a photo on the porch of Rosie’s mobile home in Golden Meadow, Louisiana, on October 1, 2021. REUTERS FILE PHOTO

“If you see this destruction around you constantly and it’s not going anywhere, it beats down on people,” Magee said. “I’m really worried about the mental health of people.”

Magee and others say they need temporary FEMA trailers. FEMA says that takes several weeks, and is complicated by federal and state regulations that make it difficult to bring in temporary shelters during hurricane season.

FEMA, along with the Small Business Administration, has paid out over $1.1 billion for Ida damage so far, mostly through grants to homeowners, along with FEMA’s national flood insurance program. Uninsured damage estimates are upward of $19 billion, according to the property data and analytics company CoreLogic, with 90% of those losses along Louisiana’s coast, and the rest in Alabama and Mississippi. There could be another $21 billion in damage to insured properties.

In Galliano, Maria Molina handwashed shirts and shorts for her 7-year-old daughter Julia and grown son Leonardo; she then hung them out to dry.

“I’m out of work, I’m out of money and we’re out of food. We don’t have anywhere to go, even though this trailer seems unsafe,” she said of her blue mobile home, which was now akilter with a damaged roof and foundation.

Molina was awaiting word on whether she’ll qualify for any FEMA aid.

Down the road in the town of Golden Meadow, Rosie Verdin, 73, stood on the tilted porch of her home behind the tribal headquarters of her United Houma Nation.

Verdin said Ida’s destruction was the worst she’d seen. Some three-fourths of her tribe’s 19,000 members saw their homes destroyed or left uninhabitable.

“But there is nothing that will drive us off this land,” she said. “With or without help, we’ll rebuild and stay right here.”