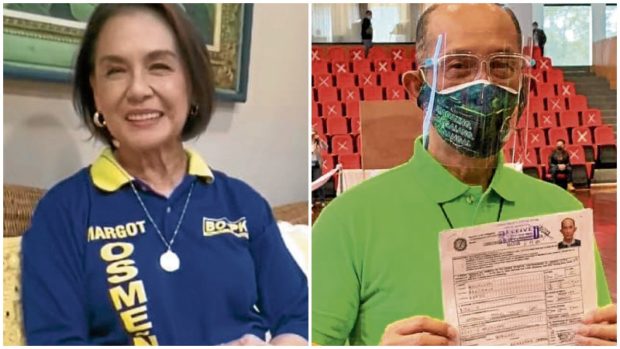 CEBU CITY— After staying away from politics for three years, the prominent Osmeña family in this city is seeking a comeback in the 2022 polls.

It was not yet known if Tomas will seek an elective post in 2022 although there were talks that he will run for Cebu representative, a position he held from 2010 to 2013.

“My decision to run as mayor is not something that Tommy asked me to do. Since he started his political career, he never asked me to run,” said Margot, noting that she decided to seek the post because “the city was not well.”

Tomas, in a Facebook post, said what the city needed now was “not a strict father, but a caring mother.”

“I am not ashamed to admit that she is more qualified than I am to take care of our city in the painful difficulties our people are going through today,” he said. “Like an ailing child, our city needs help.”

In Baguio City, Mayor Benjamin Magalong is seeking reelection in a bid to complete the city’s redevelopment, which was delayed by the coronavirus pandemic.

Magalong, the country’s top consultant on contact tracing, filed his candidacy on Tuesday as the standard-bearer of the Nationalist People’s Coalition in the city. His candidacy dispelled talks that he was eyeing higher office.

Magalong had set out to finance massive changes in Baguio in 2019, with the development of a modern public market and slaughterhouse and the construction of a waste-to-energy power plant to improve the city’s waste management. He also embarked on a Burnham Park rehabilitation plan.

But government grants and loans which were secured for some of these projects were withdrawn to fund the city’s pandemic response.

In Ilocos Sur province, the feud shaking the Singson political clan had taken another turn after Narvacan Mayor Luis “Chavit” Singson asked his son and daughter-in-law on Sunday to consider dropping their candidacies.

This was the condition set by the 80-year-old Singson, a former governor and representative, to unite his family, which he said had already been torn apart due to political rivalries.

Chavit is running against his 41-year-old son Ryan, the outgoing governor, in the highly anticipated vice gubernatorial race. The post is currently held by another Singson, Jerry, the younger brother of Chavit.

Chavit, who served as governor between 1972 to 2013, said he also asked Ryan’s father-in-law, Rep. Deogracias Victor Savellano, to back out of running as first district representative of Ilocos Sur to make way for Ronald, Ryan’s older brother, who is running for the same position.

In Nueva Ecija province, two members of the Joson political clan will slug it out for the mayoral post in Quezon town.

In Cagayan province, Mayor Esterlina Aguinaldo of Sta. Praxedes town will seek reelection but will be challenged by her brother, former Mayor Danilo Aguinaldo. The siblings also battled for the mayoral seat in 2019.