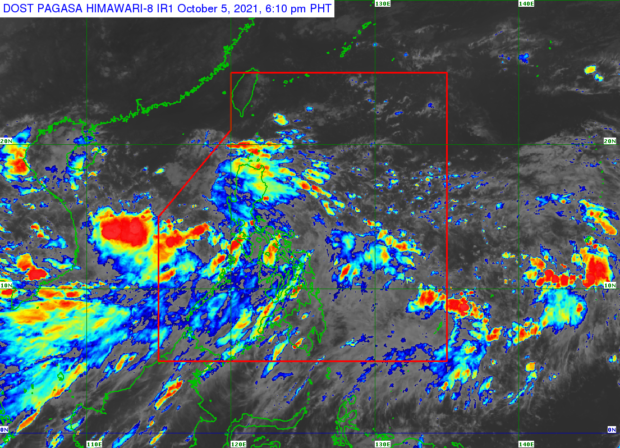 MANILA, Philippines — Tropical Depression Lannie will leave the Philippine Area of Responsibility (PAR) by Wednesday, according to the state weather service, as a new low-pressure area (LPA) may enter the country on the same day or Thursday.

The Philippine Atmospheric, Geophysical and Astronomical Services Administration (Pagasa) also said in its 5 p.m. forecast that the new LPA may even develop into a typhoon by Friday or Saturday.

But before that, Pagasa said Lannie was 380 kilometers (km) west of Coron, Palawan, around 4 p.m. Tuesday and accelerated as it moved west-northwest at 30 kilometers per hour (kph) with wind speeds of 45 kph and gusts of up to 55 kph.

(Although the center of the typhoon is already in the middle of the West Philippine Sea, the clouds will still be thick over the majority of Luzon and the western sections of Visayas and Mindanao.)

As for the incoming LPA, Pagasa said it was spotted 1,645 km east of Mindanao late Tuesday afternoon and was anticipated to enter the PAR by Wednesday evening or Thursday morning as it was also likely to intensify into a typhoon this weekend.

(PAR is likely to enter the LPA by Wednesday evening or Thursday morning, and we see that it could become a typhoon by Friday or Saturday.)

Once the LPA turns into a typhoon, it would be named locally as “Maring,” according to Pagasa. It would be the 13th typhoon to enter the country this year.

(It is currently unlikely to make landfall but that could still change.) 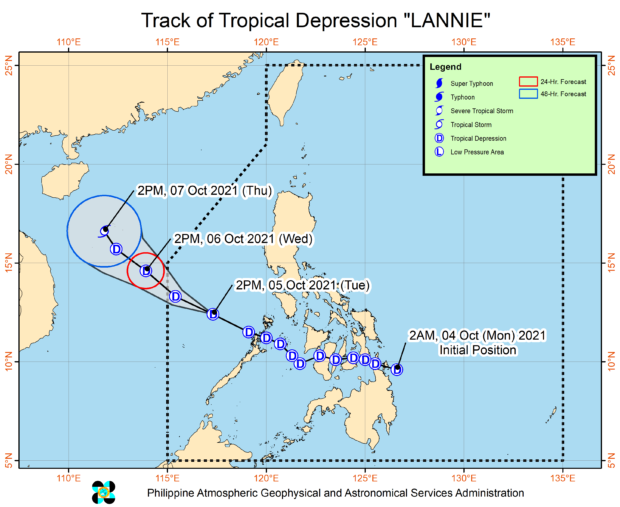 Due to the presence of Lannie, Luzon, including Metro Manila, would still experience cloudy skies with chances of scattered rain showers on Wednesday, Pagasa said.

The same weather condition will also prevail over the Visayas and parts of Western Mindanao.

The rest of Mindanao, on the other hand, will have fairer weather on Wednesday but rain showers could still be expected especially during the afternoon and evening.

Meanwhile, the state weather bureau’s forecast temperature range in key cities/areas around the country on Wednesday were: