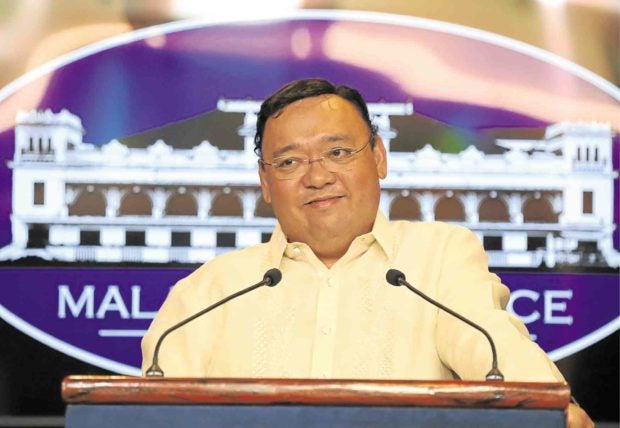 MANILA, Philippines — President Rodrigo Duterte only “bought cookies” and not a high-end watch as he checked how businesses were doing during a visit to a posh Makati City mall with long-time aide Senator Bong Go over the weekend, Malacañang said Tuesday.

According to presidential spokesperson Harry Roque, the President “just made a side trip” to the mall after he accompanied Go in the filing of his certificate of candidacy last October 2 at the Sofitel Harbor Garden Tent in Pasay City.

Roque issued this explanation after Senator Richard Gordon slammed Duterte and Go for visiting luxury watch stores when people have been suffering amid the COVID-19 pandemic.

“The President just made a side trip to a mall after accompanying Senator Christopher Lawrence ‘Bong’ Go in the latter’s filing of his Certificate of Candidacy last Saturday, October 2. However, this was tainted with malice from an expected critic who relishes on putting the Chief Executive in a bad light,” the official mouthpiece of Duterte said in a statement.

“President Duterte went around personally checking how businesses are faring with the re-opening of industries and the economy. PRRD stayed for a few minutes and bought cookies – not a high-end watch, as one senator maliciously implied,” he added.

Noting how Duterte has worked “tirelessly” amid the pandemic, Roque said the President “will spend the remaining days of his term guiding the country towards post-COVID-19 recovery.”

During the continuation of the Senate blue ribbon committee hearing on the procurement of COVID-19 supplies, Gordon brought up Duterte and Go’s visit at luxury watch stores as he was talking about the luxury vehicles bought by Pharmally officials.

(Are we not aware that a lot of people are suffering, yet you still go to luxury shops?)

Gordon has been the subject of Duterte’s attacks in his public speeches as the senator leads the investigation on the government’s procurement of allegedly overpriced COVID-19 supplies last year.