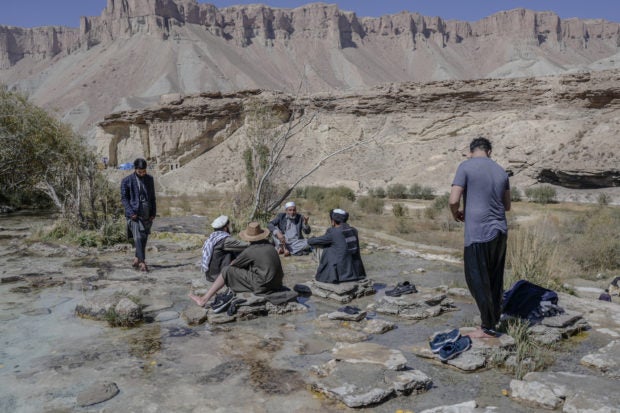 People enjoy their day at the Ban e-Amir lake in the Bamyan Province on October 4, 2021. AFP

BAMIYAN, Afghanistan — They have long survived hand to mouth, but since the Taliban conquered the Bamiyan valley, rural Afghans living in its mountainside caves have been left weak from hunger and fear.

Known as one of the most beautiful regions in Afghanistan, the rugged, central valley is home to several hundred families living in caves that were carved into sandstone cliffs by Buddhist monks in the fifth century.

The community is among the poorest in the country and the Taliban takeover in August has only exacerbated their hardship, with international aid cut off, food prices rising and unemployment spiking.

They live a few kilometers from where the valley’s famous giant, ancient Buddha statues once stood, before they were dynamited by the Islamist group when they were last in power two decades ago.

Fatima says her cave partially collapsed during heavy rains a year and a half ago, leaving the 55-year-old and three family members crammed into a tiny cavern measuring just six square meters (65 square feet).

“We won’t eat tonight. And winter is almost here. We have nothing to keep warm,” she says, her face partially covered by a black veil.

“We live in misery and misfortune.”

‘I come back with nothing’

Daily wage laborers and porters no longer bring home the little money they once did to settle rumbling stomachs.

Only the harvesting of potatoes has continued — the single crop that can be grown in the area at an altitude of 2,500 meters (8,200 feet).

“I go to the Bamiyan bazaar every morning, but I come back with nothing,” says Mahram, a 42-year-old bricklayer.

Now the family is surviving by sending their children to help harvest potatoes.

“The farmers give them some instead of salaries,” Mahram says. “That is all we have, with a bit of bread.”

“But in 10 days, the harvest will be over, and we will really be hungry. People will die.”

Like most people living in the region, the families are Hazara, a mainly Shiite ethnic minority that has been marginalized and persecuted in Afghanistan for centuries. 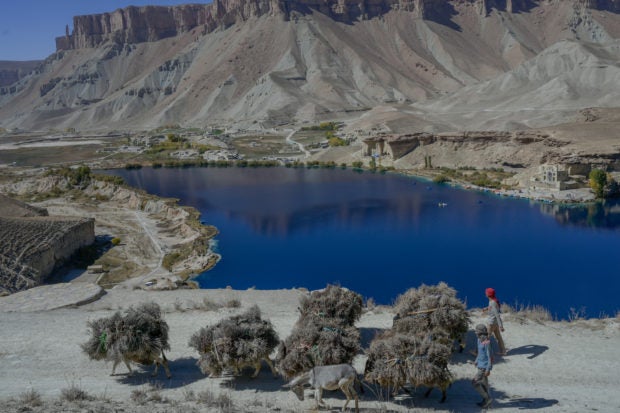 People walk their donkeys laden with bushes collected for the winter near Ban e-Amir Lake in Bamyan province on October 4, 2021. AFP

The victory of the Taliban, made up of Sunni hardliners who see the community as heretics, has caused panic.

“It is very frightening,” says Amena, a 40-year-old mother of five children.

“But they have not come, and will probably not come all the way up to where we are.”

Amena parts the curtain at the entrance to her cave to reveal a platform carved into the rock topped with two cushions, a threadbare carpet, and a rickety wood-burning stove that has covered the ceiling with a thick layer of soot.

Near the doorway lies a bundle of potato branches, the family’s only fuel.

“Wood is too expensive,” she says.

There has never been electricity in the area, and collecting water requires three long trips down to the river in the valley each day.

The deputy chief of the local council, 25-year-old Saifullah Aria, says the situation is dire.

“They usually make 100-200 afghanis a day, but for the past six weeks, with the Taliban, they’ve made nothing.”

He says most eat just one meal a day of potato and bread.

Aria adds that he has never seen NGOs reach the valley, and that his pleas for help from the local Bamiyan authorities have gone unanswered.

“With the cold coming soon, the weakest here will die, that is for sure.”