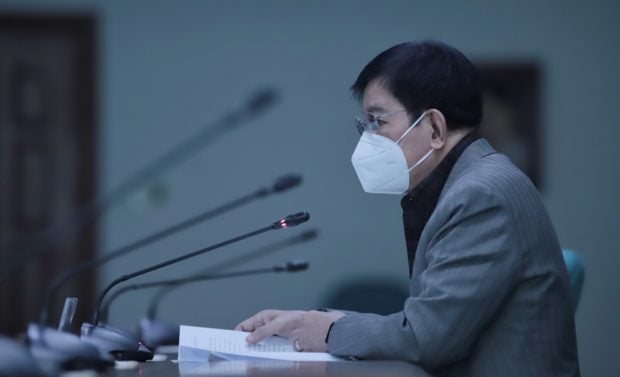 Sen. Panfilo “Ping” Lacson, chairman of the Committee on National Defense and Security, Peace, Unification and Reconciliation, during one of the Senate hearings. Senate PRIB file photo / Joseph Vidal

MANILA, Philippines — Senator Panfilo Lacson has questioned the Philippine National Police (PNP) as to why it has a program for a “global coalition” of advocacy support groups and force multipliers when the police force’s main duty is to secure people from internal threats.

Lacson, a former police chief himself, said during the Department of the Interior and Local Government (DILG) budget hearing before the Senate on Tuesday that the PNP’s “Global Coalition of Lingkod Bayan Advocacy Support Groups and Force Multipliers” was being used for politics by its community relations director.

(Looks like the target of this program is OFWs. Well, i’ll be frank, is this intended for political gains of the community relations? Because the PCR director’s wife is a candidate for party-list.)

Senator Ronald “Bato” dela Rosa belied the claim of Lacson that the PNP is engaging into partisan politics with the program for OFWs for peacekeeping advocacy when the role of the police should be limited to internal security only.

Dela Rosa clarified that the program organizing OFWs and their families started when he was the chief PNP. He said that at that time, many OFW have called him and expressed their fear that the war on drugs might affect the safety of their families in the Philippines.

Upon Dela Rosa’s instruction, the PCRG launched a program that is now called the Global Peace Community Relations, which looks into the welfare of OFW through the police attaches in countries where they are working. The Complaint and Referral Monitoring Desk (CRMD) of the PCRG, now Police Community Affairs and Development Group (PCADG) is the one that handles the concerns of OFWs.

Dela Rosa dismissed the allegation that politics is behind the PNP’s engagement of OFW but Lacson maintained his disbelief and made remarks that a PCR general is also organizing women sector because the wife is running for a partylist group in Congress.

Volunteerism is not politicking

Asked by the media for his reaction on the statements of Lacson during the senate budget hearing, Sermonia said the Coalition of Lingkod Bayan Advocacy Support Groups and Force Multipliers are third-party civilian partners of the PNP who have volunteer their groups for awareness advocacy activities in support of the people’s mobilization requisites of the National Task Force to End Local Communist Armed Conflict (NTF-Elcac).

Sermonia said, whoever is feeding Sen. Lacson of this information must be ill-informed about the noble intention of the PCR program and misconstrued the mandate of the PNP on community relations are cheap political campaigning, especially the OFW issue.

“Whether or not the Filipino is here or abroad, we want to assure them that the PNP in the country is ready to provide assistance to their families. I dont think there is anything wrong with that. Bayani nga ang OFW, kaya kung makakatulong kami na wag na sila magalala sa pamilya nila dito na nangangailangan ng assitance ng PNP gagawin natin. Yan ay tanda ng aming pasasalamat sa pagiging bagong bayani,” he added.

“As to the word coalition, which Senator Lacson has contested, it is not just OFWs but 11 sectors of society are engaged and we are working with them,” Sermonia added.

In response to Lacson’s queries, PNP chief Gen. Guillermo Eleazar said that the program was meant to address concerns of overseas Filipino workers (OFWs) who may need assistance from the police.

Eleazar also assured that the program would not be used for politics.

“Because of the deployment of our police attache in the different countries and region, we are also providing assistance to them, so parang ‘yong term sir, ginamit lang so that we can have engagement with the OFWs and their families so that we can assist them,” Eleazar said.

“But I would like to assure Mr. Chair, the members of the Senate, and the people that this activity, this effort of the PNP to engage with the public will not be used for political purposes sir,” he added.

Dela Rosa, another former PNP chief who was President Rodrigo Duterte’s first police head, clarified to Lacson that the program started under his watch, as it was part of the police’s efforts to reach out to OFWs who are asking them to check on their families in the Philippines.

“This program started during my time, and the purpose, the objective of this program as explained to me by General Sermonia who was then my director of the PCRG, is that PCRG […] ang pinaka-problema na nakikita nila is sila ang tinatawagan palagi ng mga OFWs regarding their concerns sa problema ng kanilang mga pamilya dito sa Pilipinas,” Dela Rosa said.

Lacson then suggested that the name of the program be changed, so that there would be no confusion regarding its scope.

Then, DILG Secretary Eduardo Año assured Lacson that they have asked Sermonia to explain the program, as he also feared that there might be some misinterpretation with the program.

Año also noted that Sermonia has been moved as PNP’s Director for Operations, leaving PCRG and the Directorate for Police Community Relations.

“Police Director Sermonia is now already the director for operations, and he has nothing to do now with DPCR and PCRG.  And we also gave instruction to the new head, Police Brig. Gen. Bustamante, to take charge of the projects and see to it that there will be no attribution to any election activities or any political partisan activities,” he added.

Lacson said that the Global Coalition of Lingkod Bayan Advocacy Support Groups and Force Multipliers was launched last June 25, under the Safe Philippines project of the department.

Last July 5, former DPCR head Police Col. Manuel Lukban Jr. said that the program was created based on a strategy used by the Communist Party of the Philippines to spread its influence worldwide.

This is also not the first time Lacson mentioned Sermonia’s name during a Senate hearing: previously, the Senator asked the police official to explain why he ordered police commanders and personnel in several parts of the country to gather the data of people as part of their anti-insurgency campaign.