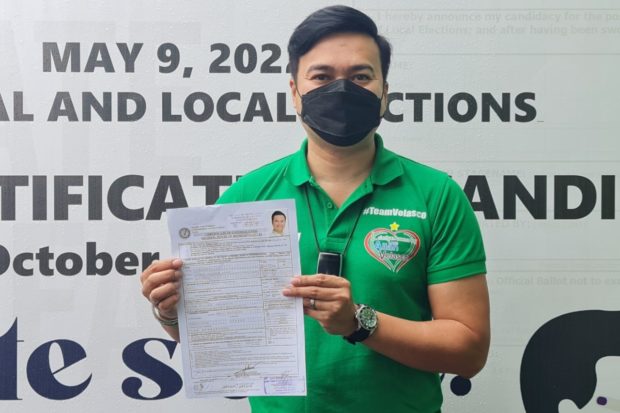 PHOTO CAPTION: Speaker Lord Allan Velasco formalizes his reelection bid as he files on Tuesday, October 5, his certificate of candidacy for representative of the lone district of Marinduque province before the Commission on Elections office in Boac town. Velasco, who is currently serving his second consecutive term, vows to continue championing the interests and welfare of Marinduqueños should he be given another three-year term in Congress. Photo from the Office of the Speaker

Velasco filed his certificate of candidacy before the Commission on Elections office in Boac town.

The House of Representatives leader, who is currently serving his second consecutive term, said he would “continue championing the interests and welfare of Marinduqueños” if he will be elected once again in Congress.

Velasco was elected as House speaker in October 2020 following the ouster of then Speaker Alan Peter Cayetano.

Velasco was first elected as Marinduque representative in 2010, beating Edmundo Reyes from the ruling Reyes family by a slim 4,000 votes.

Velasco ran for reelection in 2013 but lost to Regina Ongslako Reyes in another close vote.

He, however, questioned Reyes’ citizenship and his petition was upheld by the Supreme Court – leading to his proclamation as Marinduque representative in February 2016.