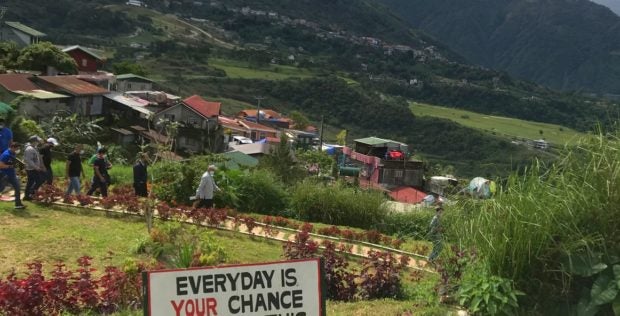 ECO-FRIENDLY ATTRACTION: An open dump that collapsed in 2011 has been converted and will soon open as a public park in Baguio City. —NEIL CLARK ONGCHANGCO

BAGUIO CITY, Benguet, Philippines — This city’s mountain of trash, which collapsed during a 2011 storm and left seven people dead, is now a nature park that could be opened soon to the public as its newest tourist attraction.

At least 10 huts have been put up around small flower gardens and pockets of future woodland at the former Irisan open dumpsite. These structures offer a grand view of Mt. Santo Tomas, which is popular to tourists because of two giant satellite dishes.

Porous stone pathways lead down to these small wooden shelters as well as two “dap-ay,” the term for stone-encrusted gathering circles where indigenous Cordillera villages congregate.

Wild grass has grown further down the hill, which was once a towering 50-meter-high trash mountain that Barangay Irisan residents forcibly closed in 2009 over fears it had become unstable.

They were proven correct two years later when the trash heap toppled over houses in the city and the neighboring Benguet town of Tuba due to massive rains dumped by Typhoon Mina (international name: Nanmadol).

Mayor Benjamin Magalong inspected the new Irisan ecological park on Monday and directed Eugene Buyuccan, chief of the city general services office, to fast-track its opening to the community.

Magalong said the park would need some more polishing, but opening it this year fulfills a commitment Baguio made to the Court of Appeals, which oversees a 2012 writ of kalikasan issued by the Supreme Court based on petitions filed by the aggrieved city and Tuba residents affected by the trash slide.

One of Baguio’s chief obligations was to turn 176,600 tons of rubbish into “an environmentally friendly eco park.”

The writ issues over the Irisan dump were the first matters Magalong had to address when he assumed office in 2019. The park is also tied into Baguio’s solid waste and wastewater management programs.

Last month, the city offered a wide hilly property in Barangay Santo Tomas as the location for a state-of-the-art waste-to-energy facility that could serve outlying Benguet towns.

If plans push through, Metro Global Renewal Energy Corp. will put up a 10-megawatt facility under a P3-billion joint-venture deal with the Baguio government and the Philippine National Oil Company’s subsidiary, PNOC Renewables Corp., using all the garbage produced by Baguio and its five adjoining Benguet towns.

Around 50 hectares of the city’s 139-ha Sto. Tomas property were earlier earmarked for a waste-to-energy facility, a top-of-the-line sorting, recycling and processing plant for renewable trash, and a manufacturing plant that can convert organic waste into compost.

Baguio produces 80 percent (450 tons) of the 500-ton daily trash generated by the city and the towns of Sablan, La Trinidad, Itogon, Tuba and Tublay, which make up the economic partnership called BLISTT, said Jaime Cacho, president of Metro Global, when the plan was presented at a March executive-legislative meeting.

All businesses operating in BLISTT’s industrial zones, such as the Baguio City Economic Zone, Camp John Hay and major shopping malls, are potential clients of Metro Global’s facility, which needs 500 metric tons of rubbish to be replenished each day to sustain the 10-MW output.