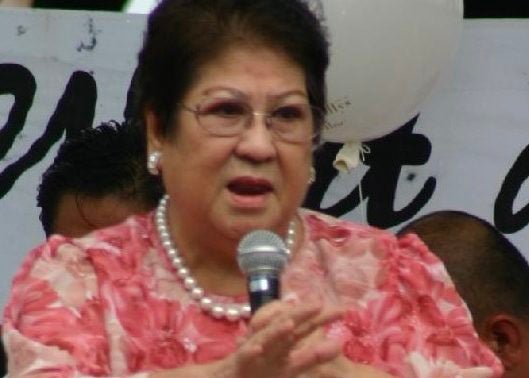 FOUNDER: Leticia Lolita Olalia Hizon will be remembered as the woman who created the bestselling tocino that began in Pampanga more than five decades ago. (Photo by TONETTE OREJAS / Inquirer Central Luzon)

CITY OF SAN FERNANDO, Pampanga, Philippines — The woman who made the local version of tocino (sweetened cured meat) and turned it into a bestselling item that began 54 years ago has died, according to her family.

Leticia Lolita Olalia Hizon, founder of the meat-processing firm Pampanga’s Best based in this city, succumbed to renal failure at the age of 84 while being treated at a local hospital on Oct. 3, her eldest son Jose Maria confirmed in a phone interview on Monday.

Hizon’s legacy product started as a gesture of help to a neighbor in Barangay Dolores here who was selling meat, her US-based daughter Angelica said.

“The meat vendor had unsold 5 kilograms of pork. She sold it to my mother who made ‘pindang’ (fermented pork) out of it. That was the start,” Angelica recalled in a separate private message.

Because the traditional way of making pindang created a sour-salty taste, Hizon, a native of Bacolor town in Pampanga province, cured the meat using a different formula that sweetened and softened it.

Angelica said her mother then called her product “tocino,” her take on the Spanish cubed bacon of the same name.

Hizon resigned from a teaching job in a public elementary school here and went full time in the business in 1967, raising the initial capital of P3,500 from a ring she pawned.

She and husband Angelo turned Pampanga’s Best into a multimillion-peso meat processing company, involving their 12 children in every aspect of the business.

In modernizing the production until it acquired the AAA category, Pampanga’s Best paved the way for other meat processors in the province. From tocino, it now produces hot dogs, “longganisa,” ham, bacon, “tapa” (beef jerky), burger patties, corned beef, “embutido,” barbecue and nuggets. Her face became the brand of the company.

She will also be remembered as the first woman to be elected to the San Fernando legislative council.

While Hizon failed in her bid for vice mayor of San Fernando and Bacolor and as representative of the third district, she did not stop holding various charity projects to serve her fellow Kapampangans.

She helped Bacolor rise from the 1991 eruption of Mt. Pinatubo by building classrooms, constructing homes and the municipal hall annex, and employing residents.

She is survived by her husband, 12 children, 61 grandchildren and 31 great-grandchildren.

“As the founder of Pampanga’s Best, the inventor of the original tocino and as a philanthropist in her community, her contribution to the Philippines’ economy is immeasurable. Likewise, her influence on Filipino cuisine cannot be overstated,” Angelica said in her social media post.