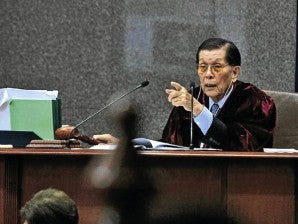 DAY 21 An angry Senate President Juan Ponce Enrile points his finger and bangs the gavel as he lectures the prosecution: “And now you’re offering a stranger in paradise to prove an allegation that doesn’t exist in Article 3. I consider this trash.” SENATE POOL

An incensed Senate President Juan Ponce Enrile on Tuesday rejected a prosecution witness called to testify that Chief Justice Renato Corona and his wife allegedly enjoyed special treatment from Philippine Airlines (PAL) while a case involving the company was pending in the Supreme Court.

On Day 21 of Corona’s trial, Enrile noted that Enrique Javier, PAL vice president for sales, was “incompetent” in proving that Corona committed betrayal of public trust and culpable violation of the Constitution under Article 3 of the impeachment complaint because he had a “platinum card” that allowed him “special benefits” from the airline.

Bribery would have been the charge, but this was not included in Article 3, Enrile pointed out, warning that the prosecution would then have to prove that this is a high crime and an impeachable offense.

The prosecution also would have to go back to the House of Representatives to amend the impeachment complaint, said Enrile, presiding officer of the Senate tribunal.

Article 3 accuses Corona of “failing to meet stringent standards under Article 8, Section 7, Paragraph 3 of the Constitution that provides that ‘a member of the judiciary must be a person of proven competence, integrity, probity and independence.’”

Enrile said the instances indicated in Article 3 of the impeachment complaint did not include Corona’s alleged abuse of PAL flight privileges.

The prosecution only accused Corona of “allowing” the Supreme Court to act on “mere letters” filed by PAL lawyer Estelito Mendoza which caused the issuance of a “flip-flopping decision” in the “final and executory case” involving the company’s entanglement with the Flight Attendants and Stewards Association of the Philippines (Fasap).

Article 3 also charges Corona with creating excessive entanglement with then President Gloria Macapagal-Arroyo through her appointment of his wife, Cristina, to Camp John Hay Development Corp. and discussing with Lauro Vizconde the pending murder case filed against Hubert Webb then pending before the tribunal.

Enrile said Javier’s testimony was not relevant to any of the three charges and advised the prosecution that the impeachment court would not “allow the expansion” of Article 3 “unless you amend it.”

Enrile rejected a plea by Representative Sherwin Tugna of party-list Cibac  to explain the prosecution position.

“The court has already ruled.  You are wasting the time of this court. My God! You have to have discipline here! You make allegations and you are going to expand it without making the proper changes in your Article 3,” he exclaimed.

“The witness is discharged, I already told you that this is the trouble with your articles of impeachment. You are not very careful in allegations and you want to expand (the charges) in the course of trial! I have warned you several times,” he fumed.  “No, no, no. There is a limit to the patience of this court.”

After a break, the lead House prosecutor, Iloilo Representative Niel Tupas Jr. stressed that Javier’s testimony was relevant in proving Corona’s “motive” and “inducement” in accommodating Mendoza’s letter that eventually led to the recall of the ruling that favored Fasap.

“If you understand the meaning of bribery, that is the tendency of the evidence you are presenting,” Enrile countered.

“Mr. Counsel, I do not know how you learned the art of pleading but I’m basing my ruling on your allegations and nothing more. If you are going to insist on your position, I say I will not change the ruling.  You want me to order you to amend the articles and send it back to the House? You have a choice,” Enrile warned.

Tupas countered that “technicalities cannot be allowed to prevail” in the trial.

“For heavens’s sake, this is not a technicality! We are already very, very liberal so as not to embarrass you but you are asking us in effect to review the decision of the Supreme Court (in the Fasap case),” Enrile shot back.

Enrile suggested that the “receipt of gifts and valuable things” would be better classified as bribery.

However, Tupas insisted that Corona’s perks with PAL would fall under betrayal of public trust.

Cuevas said such an offer of excluded evidence would only be acceptable “when there is a witness, there is an objection and the objection is sustained.” But Javier had by then left the Senate session hall.

The records Manuel read alleged that Corona used his platinum card for four round trip travels to Guam, Singapore, Honolulu and Hong Kong from 2010 to 2011; that his wife used the card for flights to Jakarta, Guam, Singapore, Bangkok, Honolulu, Hong Kong, Bacolod, General Santos, Cebu and Tagbilaran.

Also on Tuesday, the impeachment court accepted copies of monthly statements of Corona’s deposit accounts from 2005 to 2010, but these were immediately placed in sealed envelopes as requested by the defense.

Mara Arcilla, assistant manager of the Bank of the Philippine Islands (BPI) SGV Building branch, arrived with the documents on Tuesday upon orders of Senator Franklin Drilon.

The BPI branch manager, Leonora Dizon, testified two weeks ago that Corona had kept one account opened in 2005 that at most contained P12 million before it was closed in 2010. Dizon gave birth last week and Arcilla took her place.

Private prosecutor Arthur Lim asked that the documents Arcilla brought be marked as prosecution evidence but Cuevas reminded him that Drilon was the one who ordered Dizon to produce the document.

“Excuse me, Mr. Counsel, you are fishing for evidence. You did not subpoena this evidence.  This court uses its discretion to bring documents here and the fact that you tried to adopt them for your own is misrepresentation,” Enrile told Lim.

“I’m allowing presentation of this document to this court… since these documents would be presented by the defense at proper time.  If you want to mark them at that time, do it at that time,” Enrile said.

Cuevas also asked the court that the bank statements be placed in a sealed envelope “since the documents are rather confidential… so not even the press can illegally use the same on TV.”

Enrile acceded, forcing Drilon to ask that senator-judges be allowed to scrutinize the papers before they are sealed.

Without additional witnesses, the prosecution called for an early adjournment of Tuesday’s trial.

“I’d like to explain to the public that the discharge of your witness was because his testimony was considered irrelevant with respect to Article 3. [It] is not the fault of this court,” Enrile declared.

“It was the fault in your way of presenting your case and in making your allegations in your articles of impeachment. OK?” Enrile told the prosecution.

Enrile said that he had been very lenient with the prosecution, even to the point of helping them, but there was a limit to this.

“If your articles are defective, that’s your responsibility. You made an allegation specifically this: charging the respondent with lack of probity, integrity, and so forth and so on. And you stated the basis of your conclusion,” he said.

“Your statement that he doesn’t have competence, integrity, probity, and what else, independence is a conclusion of fact based on what you want to prove. And now you’re offering a stranger in paradise to prove an allegation that doesn’t exist in Article 3. That’s why I consider this trash,” Enrile said.

A visibly frustrated Tupas later told reporters: “It was extremely disappointing … They are suppressing evidence. How can we prove Article 3?” With reports from Marlon Ramos, Michael Lim Ubac, PDI; and Tetch Torres, INQUIRER.net