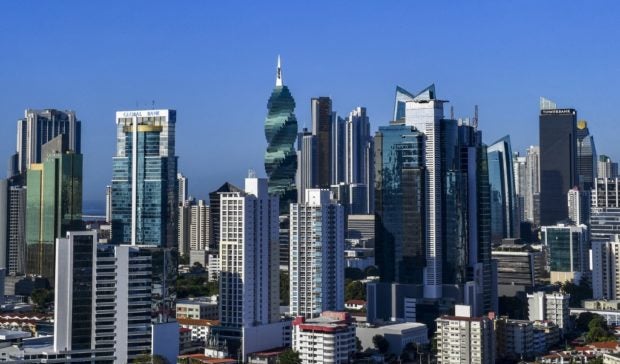 (FILES) This file photo taken on April 25, 2019 shows an aerial view of the financial centre of Panama City. More than a dozen heads of state and government have amassed millions in secret offshore assets, according to an investigation published on October 3, 2021 by the International Consortium of Investigative Journalists (ICIJ) of the so-called “Pandora Papers.” (Photo by Luis ACOSTA / AFP)

PANAMA CITY — A prestigious Panamanian law firm was named in the so-called “Pandora Papers” as implicated in the creation of offshore shell companies meant to hide money in tax havens for more than 160 politicians and public figures.

They included “some accused of looting their countries,” according to the International Consortium of Investigative Journalists (ICIJ), which obtained the leaked documents as part of the Pandora Papers, published Sunday, which sent shockwaves of embarrassment through powerful circles.

Others involved with Alcogal — co-founded in the 1980s by the son of a former Panamanian ambassador to the United States who then became ambassador himself — include a Honduran presidential candidate and a former president of Ecuador.

The firm also worked with figures in some of the most notorious financial scandals of the last decade, including the massive Latin American bribery plot involving Brazilian construction company Odebrecht and the soccer corruption case known as “Fifagate,” according to the ICIJ.

In a report, the ICIJ enumerated the 14,000 offshore entities in Belize, the British Virgin Islands and Panama created with the help of Alcogal in an effort to stash money away from public scrutiny for some 15,000 clients since 1996.

So prolific was the law firm’s offshore involvement that nearly two million of the 11.9 million leaked documents associated with the Pandora Papers — which were reported on by some 600 journalists — came from Alcogal.

‘Magnet for rich and powerful’

According to the ICIJ, Alcogol played “a leading role in the tax avoidance and asset protection industry.”

“Over the past three decades, Alcogal has become a magnet for the rich and powerful from Latin America and beyond seeking to hide wealth offshore,” the reporting group said, citing leaked corporate records.

For example, the ICIJ says Alcogal set up more than 200 shell companies for the Banca Privada d’Andorra, some of which were then used to conceal public corruption in Venezuela. The United States later blacklisted the bank over money laundering concerns and Alcogal disentangled itself from the bank.

The firm rejected accusations of shady dealings in a statement, saying it was considering legal action to defend its reputation “in a vigorous manner where necessary.”

“Alcogal rejects the conjecture, inaccuracies and falsehoods in the papers,” the firm said, offering to work with authorities to investigate any irregularities.

And several politicians named in the papers also pushed back, including former Panamanian president Ricardo Martinelli, who denied involvement in anything untoward.

The revelations from the Pandora Papers could further damage Panama’s reputation, after the Central American country’s image already took a hit in a previous round of financial scandal reporting known as the “Panama Papers” five years ago.

The government worried about fallout from the new release, according to a letter from officials released by local media.

“The damage could be insurmountable,” the Panamanian government said in the letter, sent through a law firm to the ICIJ.

The letter warned that “any publication” reinforcing “a false perception” of the country as a possible tax haven “will have devastating consequences for Panama and its people.”

The letter from the Panamanian government also references some of the reforms that the Central American country has made in recent years, although it remains on the EU list of tax havens.

The Panama of 2016 “is nothing like the Panama of today,” the government said in its letter.