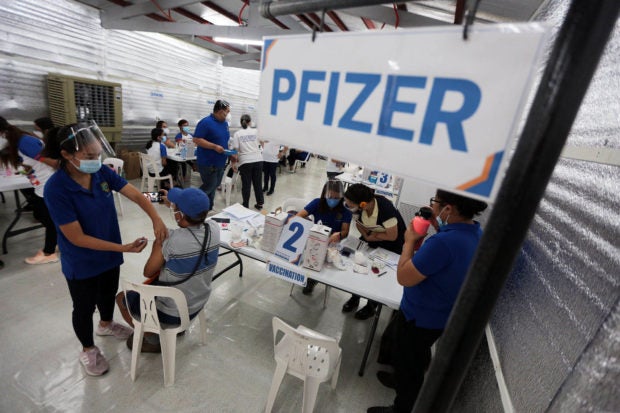 MANILA, Philippines — The country received more than 2.7 million COVID-19 vaccines over the weekend from the United States government through the COVAX global vaccine-sharing facility.

On Saturday, 889,200 shots of Pfizer vaccines from the US government arrived at Ninoy Aquino International Airport (Naia). Another 1,813,500 Pfizer doses arrived at Naia early Sunday morning.

“With the over 77 million vaccine doses we have received since February, we are moving closer to vaccinating half of our eligible population. This will be another major milestone in our vaccine rollout,” said National Task Force Against COVID-19 chief Secretary Carlito Galvez Jr.

He said the fresh supply could cover the pilot rollout of vaccinating minors age 12 to 17 years in Metro Manila.

The task force estimated that there were about 12.7 million in this age group.

“We have enough supply for the pilot implementation [in Metro Manila]. We want to open up our schools, and by vaccinating our children, we can sustain that,” he said.

The Philippines will be using Pfizer and Moderna doses for pediatric vaccination as the Food and Drug Administration has granted both brands emergency use authorization for minors age 12 to 17 years.

He thanked the US government, the United Nations Children’s Fund (Unicef), and COVAX for the donated Pfizer doses, which are among the Western brands that many Filipinos prefer.

“We highly appreciate your efforts for ensuring the delivery of these vaccines despite the limited global vaccine supply and logistical challenges you face. On behalf of President Duterte and from the Filipino people, we thank you for your act of compassion and generosity,” the secretary said.

COVAX is a global initiative aimed at the equitable distribution of vaccines and is directed by the World Health Organization, the Coalition for Epidemic Preparedness Innovations and Gavi, the Vaccine Alliance. Unicef coordinated deliveries of the vaccines to various countries.

“Over the course of the next couple of days, we will see 5.5 million more doses arrive in the Philippines, here in Manila and also down in Cebu and Davao,” said US Embassy Chargé d’Affaires Heather Variava, who was at Naia with Galvez for the turnover of the donated vaccines.

Galvez said the latest shipment of Pfizer vaccines would be deployed outside Metro Manila, including Calabarzon (Cavite, Laguna, Batangas, Rizal, and Quezon) and Central Luzon.

The succeeding deliveries of vaccines would be directly deployed to Central Visayas and Davao region.

The country expects to receive within this month millions of vaccines ordered by the government. The vaccine brands are Pfizer, Moderna, and Sinovac, according to the task force.

If the procured vaccines arrive by October, Galvez said the country would have received 100 million vaccine doses, which could fully inoculate about 50 million Filipinos, or half of the population.

“This brings us closer to our goal of achieving herd immunity or population protection for us to safely exit from this pandemic as soon as possible,” Galvez said.

As of Saturday, 21,737,744 have been fully vaccinated while 24,513,343 have been given at least one dose, according to the National Vaccination Operations Center.

In a radio interview, he said the referral hospital now has 228 patients, down from 350 patients, or about 80 percent of their capacity.

However, many of them exhibited severe symptoms and almost 80 percent of the patients in the intensive care unit were unvaccinated.

Those who were vaccinated and were still confined, meanwhile, were either elderly or had cardiovascular comorbidities such as being overweight, had heart conditions, diabetes and hypertension.

“That’s why it’s a big deal for our countrymen to get vaccinated and also take care of their overall health,” he said.

As the end-referral facility, however, PGH’s mortality rate was still at 20 percent, especially since they mostly admit severe to critical cases.

As for pediatric cases, Del Rosario said they now had 15 children admitted who had COVID-19, half of them with severe symptoms and comorbidities as well.

Despite this, he acknowledged that the government’s lockdown measures seemed to have at least slowed down community transmissions and helped take the load off referral centers.

“We have shorter waitlists now and our emergency room is no longer full with patients,” he said. “If that is the basis, I can say that we’re able to breathe more now.”

He also said their manpower was now able to catch up after scores of health workers, mostly DOH volunteers who worked on a contractual basis, resigned from the facility.

Some of them also fell sick, but “it’s not as many as before and it doesn’t leave the PGH crippled in terms of manpower anymore.”