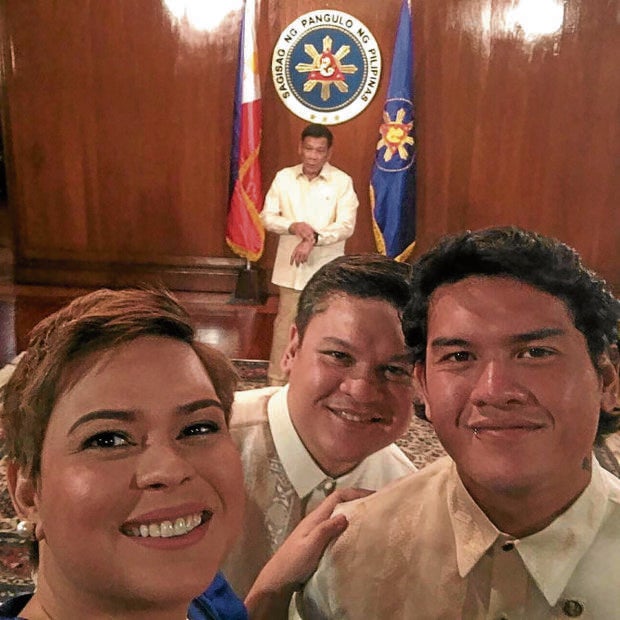 NO SIBLING RIVALRY The Duterte siblings, Sara, Paolo and Sebastian, take a selfie with their father in the background during President Duterte’s oathtaking on June 30, 2016. —FILE PHOTO

DAVAO CITY, Davao del Sur, Philippines — All of President Rodrigo Duterte’s children will likely run unopposed in what could be another quiet and unexciting election in his hometown next year.

Two more of the Duterte siblings, Vice Mayor Sebastian Duterte and his elder brother Rep. Paolo Duterte of the city’s first district, filed their certificates of candidacy (COC) for a fresh mandate for the same seats at the Commission on Elections (Comelec) office here on Sunday, a day after their sister, Davao City Mayor Sara Duterte, filed for her own reelection.

President Duterte, on the same day his daughter filed her COC, announced he would not run for vice president under Partido Demokratiko Pilipino-Lakas ng Bayan (PDP-Laban) and would be retiring from politics.

Sebastian, who is running for his second term as vice mayor, filed his COC and that of his brother Paolo, who is also seeking a second term, before noon on Sunday.

As of the third day of COC filing, no one has come forward to contest the Duterte siblings.

Paolo, the eldest among the Duterte children, has been in quarantine since Monday last week after he contracted COVID-19. Sebastian contracted the disease in July this year and has already recovered.

The three Duterte siblings are the President’s children with former wife Elizabeth Zimmerman. The President has a teen daughter, Veronica, or Kitty, with partner Honeylet Avanceña.

Sara filed her COC for a third term even as supporters continued to push her to run for president.

Peter Lavina, coconvenor of Sara All Philippines 2022, said his group was not losing hope that the mayor would still change her mind and would run for the country’s highest post at the last minute.

“We were buoyed by the fact that President Duterte did not pursue his plans to run for vice president thereby paving the way for just one Duterte to run for national office,” said Lavina, one of the lead campaigners for the President in 2016.

He said his group would still continue to push Sara to run until the deadline of COC filing on Oct. 8.

In Cagayan province, the wife of Rep. Joseph Lara has decided to run for governor against Gov. Manuel Mamba, who has yet to file his COC but was expected to seek his third and final term.

Dr. Zarah Lara filed her candidacy for governor on Sunday at the Comelec provincial office in Tuguegarao City, alongside her husband, who also sought a fresh term as the representative of the third district in the province. The congressman is the regional head of administration party PDP-Laban, under the faction controlled by Energy Secretary Alfonso Cusi.

In Western Visayas, incumbents or their family members are also gunning for the top posts in next year’s elections.

Governors Esteban Evan Contreras of Capiz and Rhodora Cadiao of Antique have filed their respective COCs for another term.

Antonio Agapito Legarda, brother of Antique Rep. Loren Legarda, will run for his sister’s post. Loren is running for senator after serving a single three-year term as representative of the province’s lone congressional district.

In Aklan, Gov. Florencio Miraflores, who is on his final term, announced he was retiring from politics and that his son, Ibajay Mayor Joen Miraflores will run for his post.

Defensor said he would also be part of the regional party Uswag Ilonggo along with Iloilo City Mayor Jerry Treñas, who is an NUP official.

Defensor and Treñas are expected to file their COCs this week.