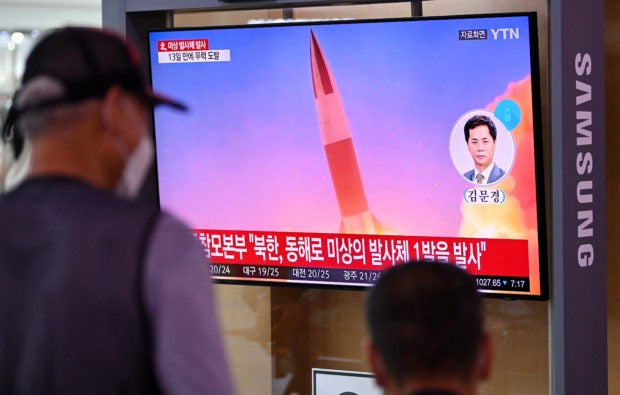 People watch a television news broadcast showing file footage of a North Korean missile test, at a railway station in Seoul on September 28, 2021, after North Korea fired an ‘unidentified projectile’ into the sea off its east coast according to the South’s military. AFP

SEOUL — North Korea this week tested what state media called a hypersonic gliding missile, sophisticated weaponry that would be the nuclear-armed nation’s latest technological advance and could factor into the strategic balance.

Here are some questions and answers on the technology and North Korea’s capabilities:

What is a hypersonic missile?

Hypersonics are defined as being able to travel at velocities of at least five times the speed of sound — Mach 5, or more than 6,100 kilometers (3,800 miles) per hour.

As well as their sheer speed, they can maneuver in mid-flight, making them much harder to track and intercept than traditional projectiles.

By cutting flight times, they also reduce the opportunity to respond.

Depending on the design, they can be capable of carrying nuclear warheads or conventional only, and have the potential to alter the strategic balance.

Russia is generally seen as the world leader in the technology so far, developing a range of new hypersonic weapons that President Vladimir Putin has dubbed “invincible”.

In July it successfully tested the Zircon, a ship-launched hypersonic missile traveling at seven times the speed of sound.

It already has Avangard hypersonic glide vehicles and the air-launched Kinzhal (Dagger) missiles in its arsenal.

Russian officials say the Avangard has reached a staggering 33,000 kilometers per hour during tests.

Others are looking to catch up: Washington is spending billions on several research programs and said this week it had successfully tested an air-launched hypersonic missile built by Raytheon that reached a speed “greater than Mach 5”.

China has also tested hypersonic glide vehicles, according to the US Congressional Research Service, which says both Russian and Chinese hypersonic systems are designed to be nuclear-armed.

What exactly does North Korea have?

Details on the North Korean missile — the Hwasong-8 — are limited.

Pyongyang’s official KCNA news agency said the test had “confirmed the navigational control and stability of the missile”, the “guiding maneuverability and the gliding flight characteristics of the detached hypersonic gliding warhead”, and the engine.

It did not say what speed it had reached, but added that it had an “ampoule” fuel system — a propellant canister that could eliminate the need for launch-site fueling.

Ordinary liquid-fueled missiles cannot be transported with their propellant on board as its volatility makes it too dangerous to do so.

Instead, they must be fueled immediately before launch, a time-consuming process that gives an enemy ample opportunity to locate and destroy them.

Has there been independent confirmation?

Seoul has not confirmed what type of missile it was.

The US and South Korea are security allies and have extensive radar and surveillance technology observing the North.

The South’s military usually detects and announces ballistic missile launches within minutes of them happening, and did so on Tuesday.

But it did not follow up with its usual practice of specifying the maximum altitude and flight distance.

Media reports citing unnamed sources say it reached a height of around 60 kilometers and flew less than 200 kilometers, but did not specify its speed — the crucial variable.

In a statement, Seoul’s Joint Chiefs of Staff assessed it as being “at an initial phase of development and will take a considerable time to be deployed”, adding the South Korean and US militaries were “capable of detecting and intercepting it”.

South Korea’s Yonhap news agency suggested without citing sources that it could have reached Mach 3.

What difference would it make?

Some experts caution that hypersonic weapons may have only limited advantages, with a Scientific American article last month saying that “by no means do they constitute a revolution”.

But if Pyongyang goes on from this week’s first test to fully develop hypersonic technology, “it would pose a significant military threat”, said Cheong Seong-Chang, director of the Center for North Korea Studies at the Sejong Institute.

“It is reasonable to assume the North is developing this missile with the US in mind,” he told AFP, adding that it could be used as a bargaining chip in future talks with Washington.

Tuesday’s launch was short-range, but Pyongyang would look to develop mid- to long-range capabilities in the field, he added.

“If developed in long-range, there is no country on earth, including the US, that can intercept such a high-speed missile.”