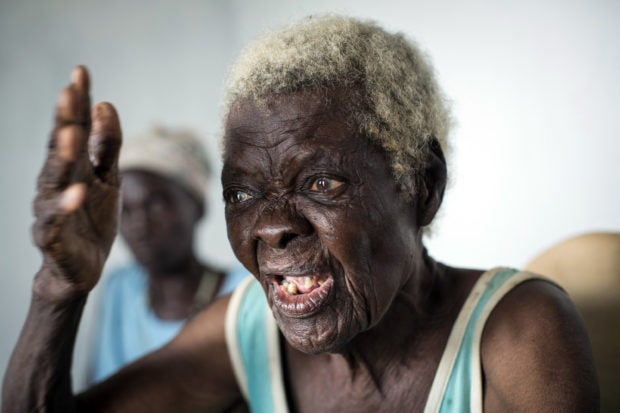 A refugee from the Central African Republic, who was accused of practicing witchcraft by neighbors, talks with humanitarian personnel in a UNHCR facility at the Boyabu refugees camp, in the north western part of the Democratic Republic of Congo on June 26, 2015. AFP FILE PHOTO

BUKAVU, DR Congo — Murders of women accused of witchcraft are surging in a troubled eastern province of the Democratic Republic of Congo, say officials and campaigners.

Since early September, eight women have been burned to death or lynched in three districts of South Kivu province, local officials say.

“We recorded 324 accusations of witchcraft for the June to September period,” says Nelly Adidja of a provincial NGO called the Association of Women in the Media.

In the district of Kalehe alone, 114 cases have been recorded, including five women who were burned alive and four who were hauled away to unknown destinations by so-called self-defense militias.

South Kivu lies in an arc of three provinces that for years have been in the grip of armed groups, many of them the legacy of regional wars that were fought a quarter of a century ago.

Bosco Muchukiwa, director and professor of sociology at the Higher Institute of Rural Development in the provincial capital Bukavu, says the surge in witchhunt attacks stems from a vacuum in governance.

“There is a resurgence of the phenomenon because the state has been failing in its core missions — the police and justice system are not doing their job,” he said.

The attacks, he added, are being whipped by “bajakazi” — bogus preachers or self-described psychics, mostly women, who live locally and claim to be able to detect witches.

“It’s false — they don’t have any powers, but they play on the gullibility of the people they manipulate in order to attract more followers, pump up their reputation and gain more clout in the village.”

Muhindo Cikwanine, a lawyer and expert in parliamentary law, said the solution was to “outlaw these charlatans’ prayer rooms”.

“In 2014, provincial lawmakers approved an edict forbidding use of mob justice in South Kivu,” he said.

However, the law was never applied, “and it hasn’t been followed up with a proper awareness campaign among the public,” he said.

Thadee Miderho, administrative chief for Kabare territory, said that six killings had been recorded since the start of the year, “mainly women aged over 60,” who had been designated as witches by “bajakazi”.

Two years ago, 11 accusers were arrested and jailed for six months, he said.

“They were released after promising to change profession, but some of them are secretly carrying on as before,” Miderho said.

Prosecutors say that it is virtually impossible to track down individuals who carry out the killings, he added.

“Whenever there’s a case of mob justice, village chiefs say it was done ‘by the public’, and don’t provide any names.”

Shasha Rubenga, a young teacher and rights activist, said he saw a witchhunt on August 16 in Cifunzi, a village of around 2,000 people on the edge of DRC’s Kahuzi-Biega National Park.

“It was about five in morning — a Monday. Young men were going around the village with a list that had the names of 19 women over the age of 65 who had been designated as witches by a prophetess,” he said.

Most of the women were able to flee from their homes, which were then destroyed.

Others were saved by troops who fired shots into the air to disperse the mob.

“But then I saw these youths grab hold of a neighbor whose name was Nyabadeux,” an elderly woman who had seven children.

“She was beaten up, doused in petrol and then set alight with a match,” he said.

The awful scene took place in the heart of the village, and children younger than 10 years old took part, Rubenga said.

“I saw a five-year-old child who had a big stick and was using it to turn over Nyabadeux’s charred body.”

Two girls and a small bakery inspired by witches and cauldrons