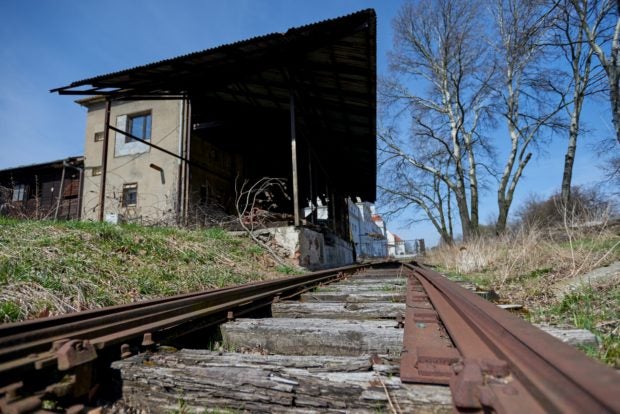 A photo taken on April 9, 2021, shows old train tracks leading past a former canteen building of SS guards at the former Nazi Germany death camp Auschwitz-Birkenau, in Oswiecim, Poland. – A Polish foundation hopes to restore a canteen where SS guards ate and sought distraction after long days of killing at the former Nazi Germany death camp Auschwitz-Birkenau, to serve as a reminder of the banality of evil. Built in March 1942 at Auschwitz — Europe’s largest death factory — the massive dining hall could house up to 4,000 people. After the war, it served as a cereal warehouse before it was abandoned and gradually fell into ruin. (Photo by BARTOSZ SIEDLIK / AFP) / TO GO WITH AFP STORY BY STANISLAW WASZAK

Berlin, Germany — A former secretary at a Nazi concentration camp, now 96, faces a German court on Thursday charged with complicity in the murders of 10,000 people — the first such case in recent years against a woman.

Irmgard Furchner was a teenager when she worked in the camp director’s office at Stutthof in occupied Poland, near the city of Danzig, known today as Gdansk.

Furchner “assisted those responsible at the camp in the systematic killing of Jewish prisoners, Polish partisans and Soviet Russian prisoners of war in her function as a stenographer and secretary to the camp commander” between June 1943 and April 1945, according to prosecutors.

A minor at the time of the alleged crimes, she is charged with “aiding and abetting murder in more than 10,000 cases” as well as complicity in attempted murder, added prosecutors from the northern city of Itzehoe.

Despite her age, the defendant, who lives in a care home near Hamburg, was declared fit to stand trial but has yet to express herself on the accusations.

The proceedings will open one day before the 75th anniversary of the end of the Nuremberg trials, in which prominent members of the Nazi establishment, including Hermann Goering, were held to account for their role in the regime.

But time is running out for prosecutors seeking to bring former members of the SS, the Nazi paramilitary group that oversaw mass executions, and their functionaries, as the war-time generation disappears.

A week after the start of the hearings in Itzehoe, the trial of a hundred-year-old former camp guard accused of being an accessory in the murder of over 3,500 people will begin in Neuruppin in the eastern state of Brandenburg.

Prosecutors are handling a further nine cases, while the body responsible for investigating Nazi crimes looks into seven others.

At issue is Furchner’s “concrete responsibility” in the killings, a spokesman for the prosecutors told AFP earlier this year, a question they tasked historians with assessing.

As a secretary working in the camp, Furchner “handled all the correspondence” for the SS commander Paul Werner Hoppe, said Christoph Rueckel, a lawyer representing Holocaust survivors, many of whom are parties in the trial.

“She typed out the deportation and execution commands” at Hoppe’s dictation, Rueckel told public broadcaster NDR.

For Furcher’s lawyer, Wolf Molkentin, it is not clear that she knew and understood the fate that awaited the prisoners.

Communication between SS officials was “so coded that a secretary was not necessarily able to decipher it,” he told the German weekly Spiegel.

“It’s possible that a typist like Mrs Furchner was screened off” from what was happening at the camp, he said.

Whether the defendant could have worked close to where thousands were killed and their corpses burned is one of the questions the trial will seek to answer in hearings lasting through to June next year.

Furchner is the only woman to stand trial in recent years for crimes dating to the Nazi-era.

“The role of women in the Nazi regime and their implication in the Holocaust has for too long been ignored by justice,” historian Simone Erpel told Spiegel weekly.

Responsibilities normally held by women in the Nazi system were generally considered outside the scope of prosecutors until a landmark decision in 2011, when John Demjanjuk, a guard at a concentration camp was convicted for serving as part of the Nazi killing machine.

Since then courts have handed down several guilty verdicts in similar cases, not just for murders or atrocities directly linked to the individual accused.

In the most recent verdict, a former SS guard, Bruno Dey, was found guilty at the age of 93 and given a two-year suspended sentence.

As the court handed down Dey’s verdict in July 2020, he apologized to Holocaust victims, saying “something like this must never happen again”.

Dey worked in the same Stutthof camp as Furchner, set up by the Nazis in 1939. It ended up holding 110,000 detainees, including many Jews. Some 65,000 people perished at the camp.