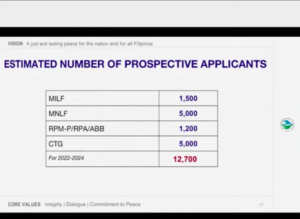 MANILA, Philippines — The Office of the Presidential Adviser on Peace Process (OPAPP) is expecting around 12,700 applicants for amnesty from 2022 to 2024, its chief of staff Assistant Secretary Wilben Mayor said Tuesday.

Moreover, Mayor hoped for the Senate concurrence on the amnesty, saying it will provide former rebels “not just a new start in life, but ultimately secure their place in society.”

“We humbly appeal for the concurrence of the Senate to realize the meaningful transformation of former rebels into peaceful and productive citizens of the country,” Mayor said.

President Rodrigo Duterte earlier signed Proclamations No. 1090 to 1093, granting amnesty to members of rebel groups who have committed crimes to pursue their political beliefs.