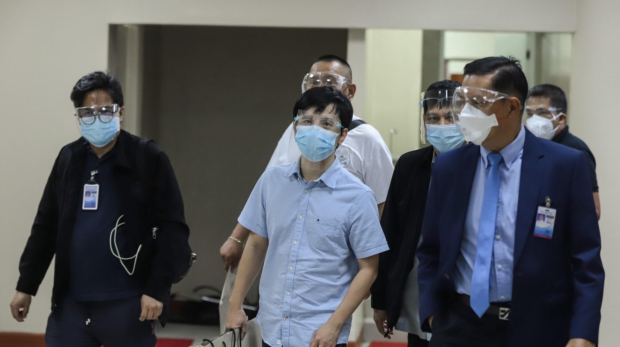 MANILA, Philippines — Before he declined a closed-door meeting with senators for a tell-all, Pharmally Pharmaceutical Corp. director Linconn Ong divulged “vital information” related to former presidential economic adviser Michael Yang’s role in financing the firm to help them in its supply deals with the government.

This was according to Senator Panfilo Lacson, who said Ong disclosed the information to him and Senate President Vicente Sotto III.

“During our conversation with him (Ong), because Senate President Sotto and I went down to the second floor and talk to him when he indicated that he wanted to say something in an executive session, he divulge very vital information which I’m not ready to share with you,” Lacson said in an interview on ABS-CBN News Channel on Tuesday.

“We had an agreement with him (Ong) at the time that it would be just between him and the Senate President and myself,” he added.

Asked what the information is all about, Lacson said: “It’s about Michael Yang.”

Pressed if it was related to Yang supposedly financing Pharmally, the senator answered: “That is correct.”

But Ong, upon the advice of his counsel, has declined to participate in a Senate executive session to disclose further details on the transactions between Pharmally and the government.

Ong is currently under the custody of the Senate after he was cited in contempt for evading questions. He was supposed to be transferred to the Pasay City Jail last Friday.

His planned transfer to the city jail was prompted by his repeated refusal to divulge how much Pharmally has supposedly borrowed from Yang.

While Ong backed out from his expected tell-all with senators behind closed doors, Lacson said the Senate was able to already extract testimony from him that is enough to indicate Yang’s role in the supply of pandemic response items to the government.

“There was already information shared by Linconn Ong as well as the other guy from Singapore that Michael Yang indeed loaned money to Pharmally to purchase [of supplies],” Lacson said.

“So even without the corroborative statement of Linconn Ong, I think we have sufficient ground to conclude or even suspect that Michael Yang really has something to do with providing medical supplies, procurement by PS-DBM [Procurement Service of the Department of Budget and Management],” the senator added.

Yang has maintained he did not finance the Pharmally, insisting that his role was limited to introducing Ong to his friends among suppliers in China who could provide financial assistance.

Pharmally chairman and president Huang Tzu Yen, for his part, has previously denied that they were favored in any way in the government’s procurement of medical supplies in 2020, saying the small company has been “unfairly prejudged.”