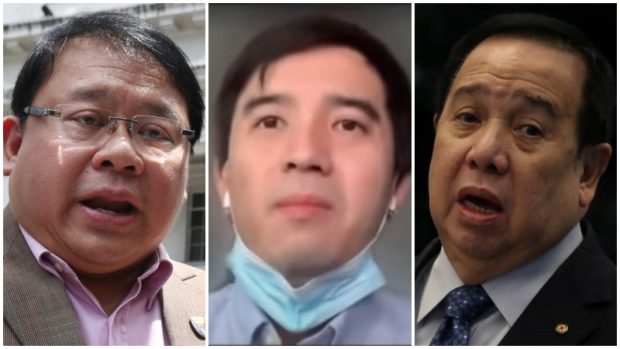 MANILA, Philippines — Pharmally Pharmaceutical Corp. director Linconn Ong declined on Monday the offer of the Senate blue ribbon panel to tell all in a closed-door session, cutting off a path senators had hoped would lead to uncovering more anomalies behind the P11.5 billion in government contracts bagged by the undercapitalized trading firm in 2020 and 2021.

Ong’s decision dealt a new blow to the Senate investigation after senators earlier lost contact with Pharmally regulatory affairs head Krizle Grace Mago, who went off the radar following her bombshell testimony on Friday when she confessed that her company had “swindled” the government by supplying substandard face shields with bogus production dates.

However, in an online interview with reporters, Sen. Richard Gordon said he was not too concerned about Ong and Mago becoming hostile witnesses.

“I don’t need you, Mr. Ong. But you’re going to need help. Ms. Mago, I’ve been kind to you. I hope you come to your senses if you’re hiding. If you’re hiding from the bad guys, tell us, so we can protect you,” he said.

Gordon noted that his panel had already extracted damning testimonies from Ong and Mago, which they had both made under oath.

In a handwritten note dated Sept. 27, Ong, who was placed under Senate custody after he was cited for contempt for dodging questions in previous hearings, said he was declining the senators’ invitation on the advice of his counsel, Ferdinand Topacio.

Topacio hinted to the media that his client would stop cooperating in the Senate inquiry.

“We are reconsidering [cooperating with the Senate]… because this is not a fair forum. This is a kangaroo forum,” the lawyer said in a message to reporters.

“Some members of the blue ribbon committee are not out to get the truth. They’re out for blood. So it’s unfair to my client if he becomes a pawn or a sacrificial lamb to draw blood,” Topacio said.

His comments immediately drew the ire of senators.

“Never threaten or call the Senate names. What do they expect by threatening the Senate? That we roll over and die? Will never happen,” Senate President Vicente Sotto III said.

“Tell him to read the transcripts before he issues statements,” he added.

Sen. Panfilo Lacson mocked Topacio for his sudden appearance, which he likened to ambulance chasing.

“Some lawyers remind me of our daily grind in the main thoroughfares of Metro Manila, while traveling to and from the office. Quite so often, in the middle of heavy traffic, an ambulance would suddenly appear from behind… as if chasing us, complete with blaring siren,” he said.

Gordon said the evidence gathered by the Senate committee so far appeared to point all the way to Malacañang.

“I don’t think we have a weak case. Far from it. All the actuations of the president indicate we have a strong case,” the senator said, recalling how President Rodrigo Duterte had spent a lot of time in his televised addresses admonishing the Senate to stop its inquiry on the transactions of the Department of Health (DOH), including Pharmally’s contracts and his friend and former government economic adviser Michael Yang’s involvement.

“The senators will stay the course,” Gordon said, adding that his committee would next try to establish the money trail.

“Where did Linconn Ong get the cash? He needs money so we will ask how did the money enter the country? We have laws. That’s where (possible) money laundering will come in,” Gordon said.

Saying “talk is cheap,” presidential spokesperson Harry Roque said in a press briefing on Monday that stronger evidence would be needed to substantiate the Senate testimony of Mago, noting that it would have to be backed by physical evidence for it to be able to stand.

“When I was training lawyers, I tell them that as much as possible, we must provide physical evidence to the court because if we will just rely on testimony. Talk is cheap. It can be bought. [The witness] can be frightened. So look for substantiated evidence, not the testimony of a single person,” he added.

But Mago was not the only Pharmally official to admit to the tampering of the production dates of the face shields.

A former employee of a warehouse allegedly operated by Pharmally told the Senate that workers were ordered to replace certificates of dates for the 2020 face shields with 2021 certificates, and were told to deliver the items regardless of their condition.

The worker, whose identity has been kept under wraps, said the instructions came from Mago, who later confirmed it.

He also said he was sure the DOH would look into and verify Mago’s allegations, and if these prove to be true, Roque said Duterte would not tolerate it.

He also said there was no way the Senate could link Duterte to the Pharmally deals.

“They have not gotten evidence that there was overprice and the [Commission on Audit] said there was none. So what would they link to the President? It’s just noise,” he said.

He noted that statements saying that the Pharmally deals could not have happened without the backing of powerful people were bereft of merit, and were made by those desperate to win the elections.

He also cited Health Undersecretary Maria Rosario Vergeire’s statement that the DOH had inspected and checked the condition of all face shields before it distributed these to healthcare workers.

In the House of Representatives, the good government and public accountability committee on Monday approved the issuance of a subpoena ad testificandum against Mago to require her appearance on Oct. 4.

The panel’s chair, DIWA Rep. Michael Edgar Aglipay, said Mago’s presence was required to “ferret out the truth amid the allegations that our committee is one-sided.”

Dargani told the Senate committee that he did not instruct Mago to tamper with the face shields and face masks, contrary to her claims.

In the same House hearing on Monday, Health Secretary Francisco Duque III also assured that Mago’s claims of tampered supplies were being investigated by the DOH.

“I don’t think there’s an expiry date indicated (on the face shield) but I’m still having that investigated because of the revelations by the officer of Pharmally. So we’re checking on this,” he said.