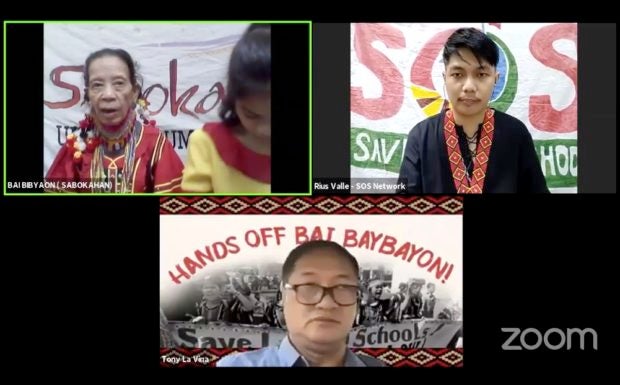 MANILA, Philippines — The first and only female Manobo chieftain in Davao who sought refuge in Manila condemned on Monday what she called the military’s harassment and coercion of her relatives, who were allegedly forced to sign affidavits claiming the tribal leader needed to be rescued from her sanctuary at the University of the Philippines (UP) Diliman.

Bai Bibyaon Ligkayan Bigkay, the only known living woman warrior of the Manobo people, belied the military’s allegations that she was kidnapped and being held against her will at the university where she is staying with other lumad “bakwit” students.

She made the remarks after her host, the Save Our Schools (SOS) Network, received reports that Bibyaon’s relatives were summoned by soldiers in Sitio Natulinan and urged to sign affidavits calling on the local government to “rescue” her.

Speaking through a translator, Bibyaon said she was in Manila to help educate others about what was happening to her homeland.

Known among her tribespeople as the “mother of the lumads,” Bibyaon is one of the staunchest champions of the Pantaron Mountain Range, one of the country’s last remaining intact rainforests.

She was also one of the lumad who were forced to evacuate Talaingod in 2015 because of intense militarization there.

Bibyaon also called on the military to stop using her relatives to threaten her, and assured them that she was “fine.”

“I know what I am doing, I am perfectly fine,” she said. “I am here because I want my children and grandchildren to know about the realities of our communities … I am doing this for them.”

LouJaye Sonido, vice chancellor for student affairs of UP Diliman, said that these allegations against UP Diliman and SOS Network were likely meant to “divide and conquer” Bibyaon’s tribespeople by painting her hosts as communist recruiters.

Tony La Viña, Bibyaon’s legal counsel, said they planned to touch base with her relatives to assess their legal remedies if they were indeed coerced to sign the affidavits.

He also called on the National Commission on Indigenous Peoples, one of the agencies that allegedly reached out to Bibyaon’s relatives, to “lay off because you don’t have any basis.”

“Clearly she is of sound mind, she is commanding,” La Viña said. “Legally she can do whatever she wants to do, she’s entitled to stay here if she wants to and to go home when she wants to.”