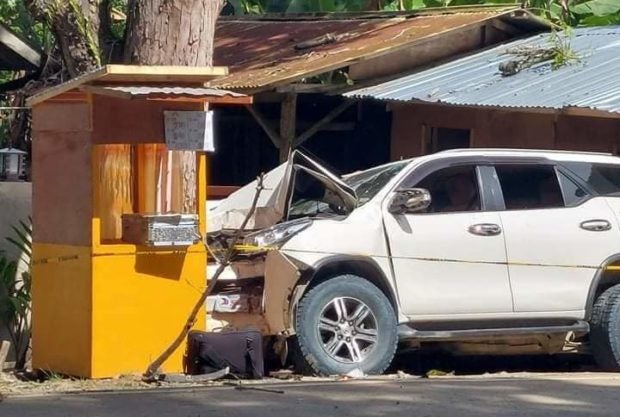 Liloy town Councilor Ernesto Bihag Jr.’s car ends up crashing into a mahogany tree after it skidded off the road when he was attacked by gunmen. CONTRIBUTED PHOTO

Liloy Police Chief Police Major Alexis Bahunsua said Ernesto Bihag Jr., 46, and resident of the town’s Causwagan village, was driving his white Toyota Fortuner on his way to Communal village when men aboard a maroon Toyota Innova overtook him along the highway and opened fire. As a result, his car skidded off the shoulder of the road and bumped into a mahogany tree.

The victim sustained gunshot wounds in different parts of his body and was rushed by the local rescue team to the nearest hospital, where he was declared dead by Dr. Geraldine Pamunag, the attending physician.

Authorities were still on the trail of the gunmen.