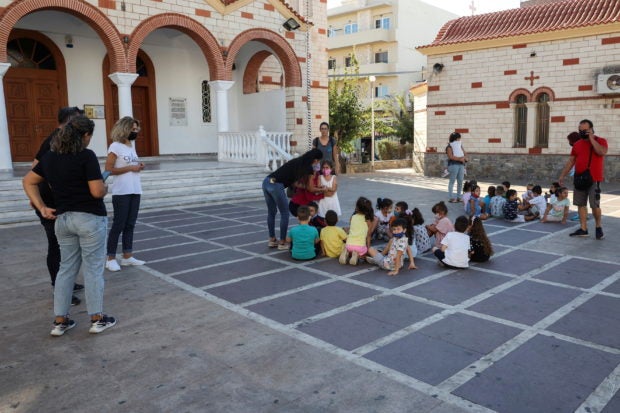 Students and their teachers are seen at a square following an earthquake in Heraklion, on the island of Crete, Greece, September 27, 2021. REUTERS

The quake, which sent people out of their homes and public buildings and caused considerable damage, was described by a Greek seismologist, Efthymios Lekkas, as a “thunderbolt” with strong aftershocks.

A man died when the dome of a church in the town of Arkalochori caved in during renovation works, a police official said. Civil protection authorities said nine people were injured in the quake, which damaged many buildings.

The tremor prompted many people in Crete’s main city Heraklion to rush outdoors. Schoolchildren were told to leave their classrooms, gathering in schoolyards and town squares.

“It felt quite strong and lasted many seconds,” a local mayor told Skai television.

The Athens Geodynamic Institute said the quake’s magnitude reached 5.8 and its epicenter was 23 kilometers (14 miles) northwest of Arvi in southeastern Crete, at a depth of 10 km.

Two killed in 6.7-magnitude quake off Greece and Turkey resorts

Read Next
COVID-19 death toll in Zambales rises to 337
EDITORS' PICK
Acer starts the year off strong with the Aspire Vero National Geographic Edition
Comelec division junks petition to cancel Marcos COC for president
PH logs 37,070 more COVID-19 cases; over 33K others recover
The best of bayside and city living at SMDC’s Sail Residences
‘Not yet the end’: Lawyer says Marcos Jr’s DQ cases to take lengthy process
Over 3 Million worth of prizes to be won at Smart Padala’s SENDali Manalo Promo!
MOST READ
NBI foils escape attempt of Kerwin Espinosa, two others
Marcos camp ‘extends hand of unity’ after COC cancellation bid is thrown out
Wendell Ramos finally gets to hold his newborn for the 1st time
No vaccine, no French Open for Djokovic, says French Sports ministry
Don't miss out on the latest news and information.