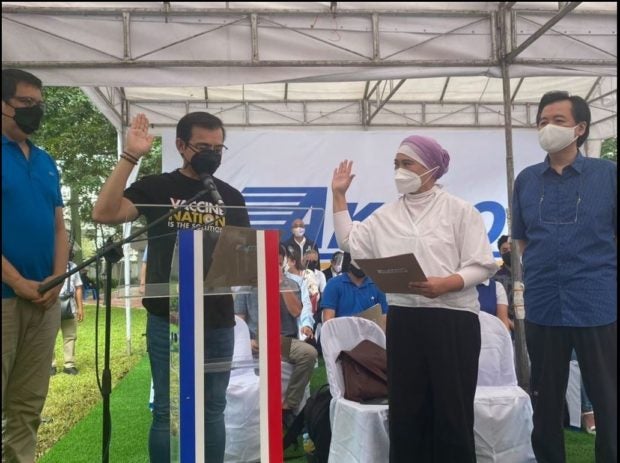 MANILA, Philippines —  More officials and personalities gunning for elective posts in the 2022 elections, including senatorial candidates Samira Gutoc and Carl Balita, have taken their oath with political party Aksyon Demokratiko.

During the program, Moreno thanked those who signed up with Aksyon Demokratiko, saying that it is a show of support to their beliefs as they joined Aksyon even if the party is not financially lucrative for local candidates.

(I can only tell you one thing, thank you very much for trusting the partnership between me and Doc Willie Ong and for the volunteers — what I am sure of is that we do not have much funds, we spend on our own here.)

“But I’m happy and grateful for your trust, may awa ang Diyos, mapagtagumpayan natin ito [God is merciful, we can win against these challenges],” he added.

Moreno also made mention of Balita and Gutoc, who would form part of Aksyon’s senatorial line-up.

(I am also happy that there is a senatorial candidate from Mindanao, from our Muslim brothers and sisters in Mindanao, I’m happy and honored.)

All in all, 54 possible candidates in the 2022 elections suited up for Aksyon, while 17 sectoral group organizations also expressed their support for Moreno’s candidacy.

Moreno announced his presidential bid last Wednesday, vowing to heal the country and act quickly in ending the current COVID-19 crisis.  He will have, Ong, and online personality and physician as his running mate.

READ: Isko Moreno: ‘I will become a healing president’