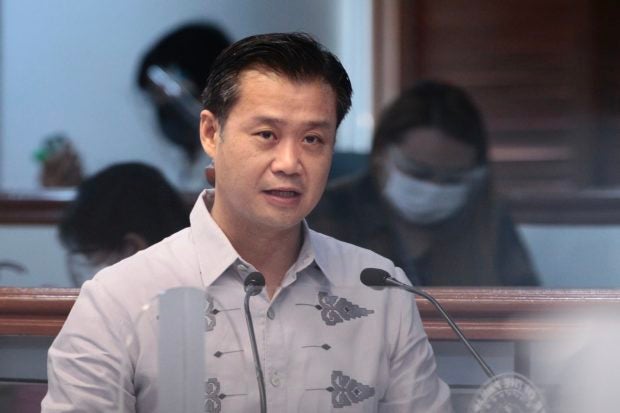 BACOLOD CITY––Senator Win Gatchalian on Sunday assured people that the Senate would look into the problem caused by the damaged submarine cable of the National Grid Corp. of the Philippines’s (NGCP) between Cebu and Negros.

The damage has driven up power rates by an average of P1.60 per kWh.

Gatchalian, who spoke at the Central Negros Occidental Cooperative virtual 43rd Annual General Membership Assembly (AGMA), said the Senate Committee on Energy that he chairs has asked the Energy Regulatory Commission and the Department of Energy to act on the matter.

“Our position in the committee is that the increased rates should not be passed on to the consumers,” he said.

Whoever destroyed the submarine cable should be made to pay, he said.

The performance bond of the Department of Public Works and Highways contractor could answer for the damage, he said. The Cebu-Negros submarine cable was damaged during the amphibious dredging at the mouth of Bio-os River in Barangay Pondol, Amlan, Negros Oriental.

“There should be a thorough investigation by the proper authorities on whether the damage was caused by negligence or was an accident,” Gatchalian said.

The Senate may also call a hearing or consultative meeting to resolve the matter, he said.

Agnes Devanadera, chair of the Energy Regulatory Commission, earlier directed the Philippine Electricity Spot Market Corp. to stop collecting congestion and other charges that have driven the consumer rates up, until the restoration and operationalization of the transmission line, or until the ERC orders a more applicable pricing and settlement solution.

Charges due to the line outage collected for the billing months of June to August should be refunded to the customers, Devanadera said.

Read Next
New Zealand to begin letting people isolate at home as it looks to ease border curbs
EDITORS' PICK
PH logs 37,070 more COVID-19 cases; over 33K others recover
Acer starts the year off strong with the Aspire Vero National Geographic Edition
Over 3 Million worth of prizes to be won at Smart Padala’s SENDali Manalo Promo!
‘Not yet the end’: Lawyer says Marcos Jr’s DQ cases to take lengthy process
The best of bayside and city living at SMDC’s Sail Residences
Critical scenario: 3 Comelec vacancies just 3 months before elections
MOST READ
Duterte asks: ‘Is COVID-19 airborne?’ Duque blames spread on ‘token compliance’ with rules
‘Not yet the end’: Lawyer says Marcos Jr’s DQ cases to traverse lengthy process
NBI foils escape attempt of Kerwin Espinosa, two others
Marcos camp ‘extends hand of unity’ after COC cancellation bid is thrown out
Don't miss out on the latest news and information.