Ariel Cortes has lived most of his life surrounded by water. As a young boy in the 1970s, he worked as a fishpond caretaker until he was old enough to join the fishers in Manila Bay.

At 51, Cortes continues to fish in the bay with at least three other men from his community in Navotas. They set out at 4 p.m. daily on his fishing boat down the Batasan River and past towering floodgates that separate the river from the sea, hoping to fill up their large plastic tubs with catch before heading back home at 4 a.m. the next day.

On good days, they return with the tubs overflowing. But recently, such bounties have been hard to come by, he said. The small catch from their usual fishing grounds close to home forces them to venture to the waters off the provinces of Bulacan and as far as Bataan and Cavite. 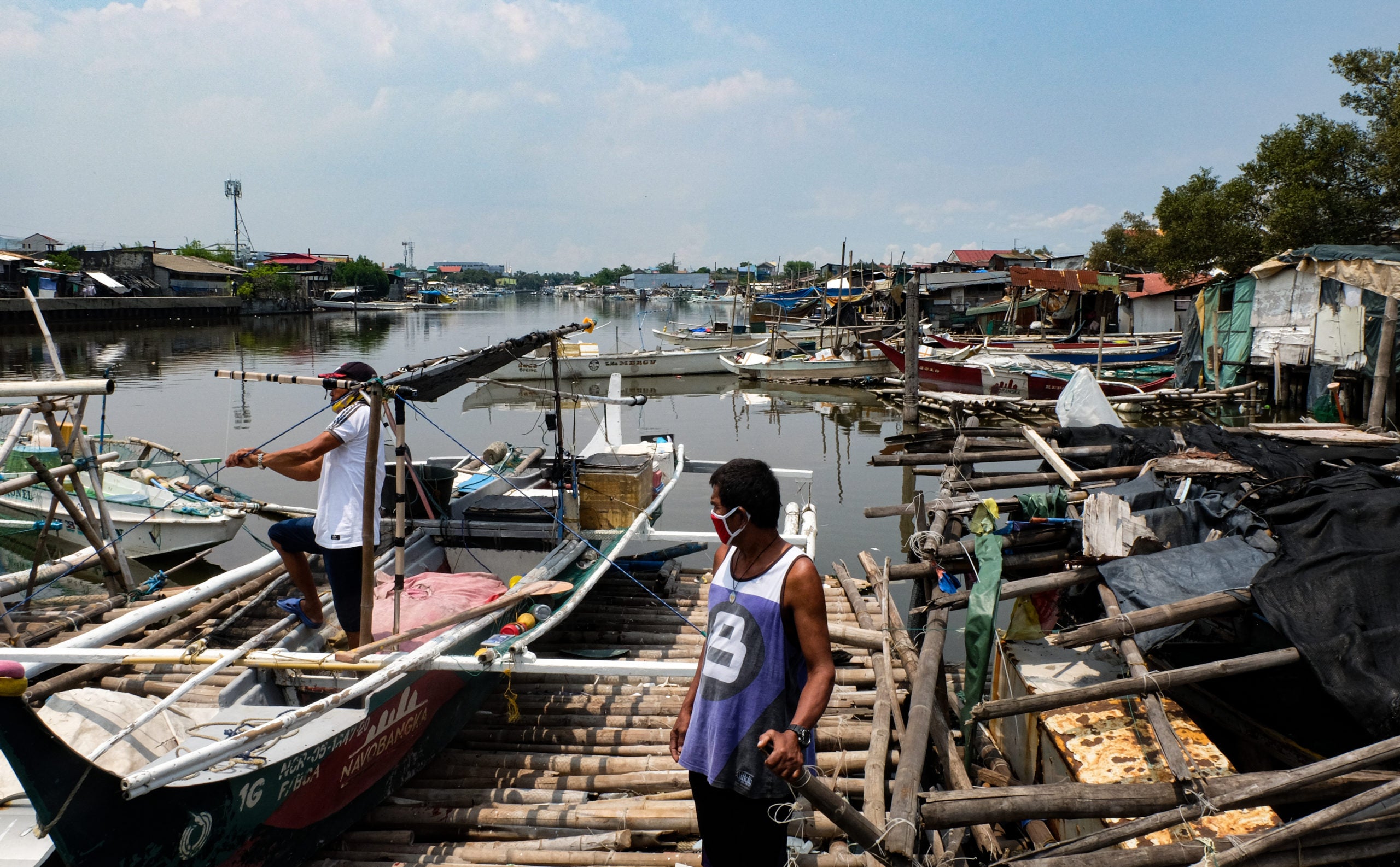 Ariel Cortes (in white) secures his fishing boat that he received from the Navotas City government. He and Ruel Guban (in purple) are among the city’s more than 8,800 fishers. PHOTO BY AC DIMATATAC

“Our lives here are dependent on fishing, but there are weeks, even whole months, when we don’t go out to sea anymore,” he said, blaming pollution and massive reclamation projects for the declining fish catch.

But the same waters that sustain him and his community also pose an existential challenge in the years ahead.

Studies show that the rising sea level of Manila Bay could inundate coastal communities and force them to retreat elsewhere. For Cortes and other fishers, the prospect of moving permanently away from the coast would not only mean losing their homes and livelihood, but also their identities linked to the sea. 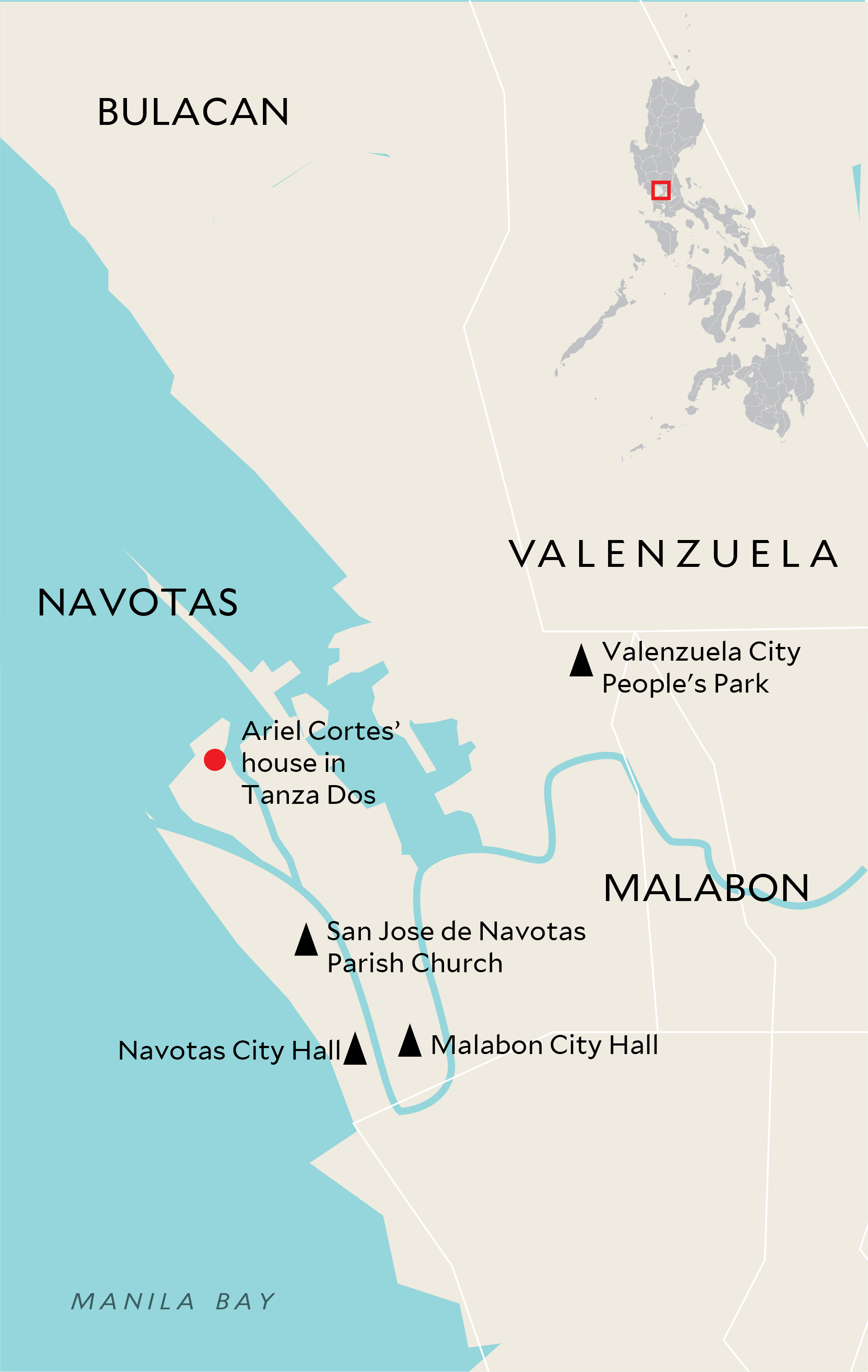 Climate adaptation and disaster risk reduction experts say long-term and sustainable development programs are necessary to prepare the sprawling metropolis for the impact of sea level rise while ensuring that the most vulnerable sectors are not left on the wayside.

Compared to extreme weather events such as typhoons, planning for slow-onset climate impacts like sea level rise is more complex because it is less dramatic and appears distant, said Red Constantino, executive director of the Institute for Climate and Sustainable Cities (ICSC).

“You will not see the drama of calamity or body counts … so the government is still blind virtually to its long-term threats,” he said. “That needs to change because even if it’s slow, it is potentially irreversible or even harder to grapple with.”

But sea level rise will not create adverse effects by itself alone. It will just “exacerbate, worsen, magnify and amplify” the effects of the wrong policies that have been put in place and are being implemented, Constantino said. 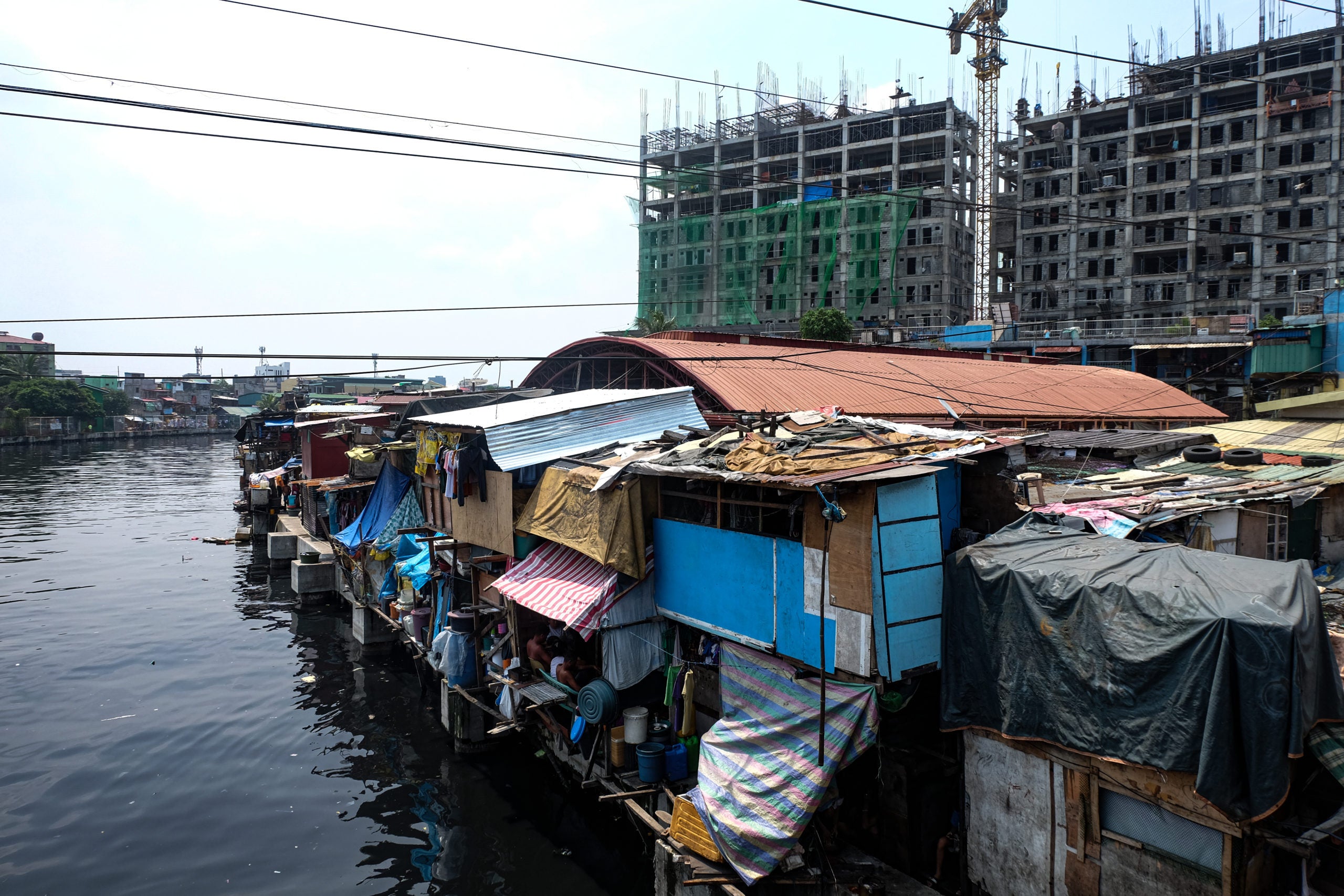 Metro Manila, the political and economic center of the Philippines, is a sprawling metropolis beset by poor urban planning and land use policies. There is a wide economic disparity among its 13 million residents, displayed in high-rise condominium buildings towering over informal settlements and slums across the metro. PHOTO BY AC DIMATATAC

“The government is still blind virtually to the long-term threats of sea level rise.”

Disaster risk experts say that Metro Manila’s poor urban planning and land use policies are factors that increase its vulnerability to climate change. These will deepen the inequalities among the 13 million people who live in the national capital and will affect their capacity to withstand shocks.

It does not help, said Constantino, that policies and programs meant to address both climate change hazards and poverty are shortsighted and treated as mutually exclusive. For instance, in the plans of the National Economic and Development Authority, climate change is a subsector and defined as an environmental problem, he said.

“You cannot formulate a long-term effective response or strategy if you’re only looking at this problem based on medium-term development plans,” Constantino said. “So, every six years just won’t do because climate change is not a short-term problem.”

In the Philippines and most Southeast Asian countries, traditional disaster risk reduction measures aren’t holistic and sufficient to deal with our warming planet, according to Ven Paolo Valenzuela, a disaster preparedness expert who has done extensive studies focused on the impacts of sea level rise on cities in the region.

“[These measures] usually revolve around physical, engineering-based or relocation-based strategies that do not take into consideration the complexity and uncertainty that is with rapid urbanization and climate change,” he said.

Added Valenzuela: “These do not address the root causes of vulnerability that actually creates the complexity that makes the city unable to adapt to the uncertainties of climate change.” 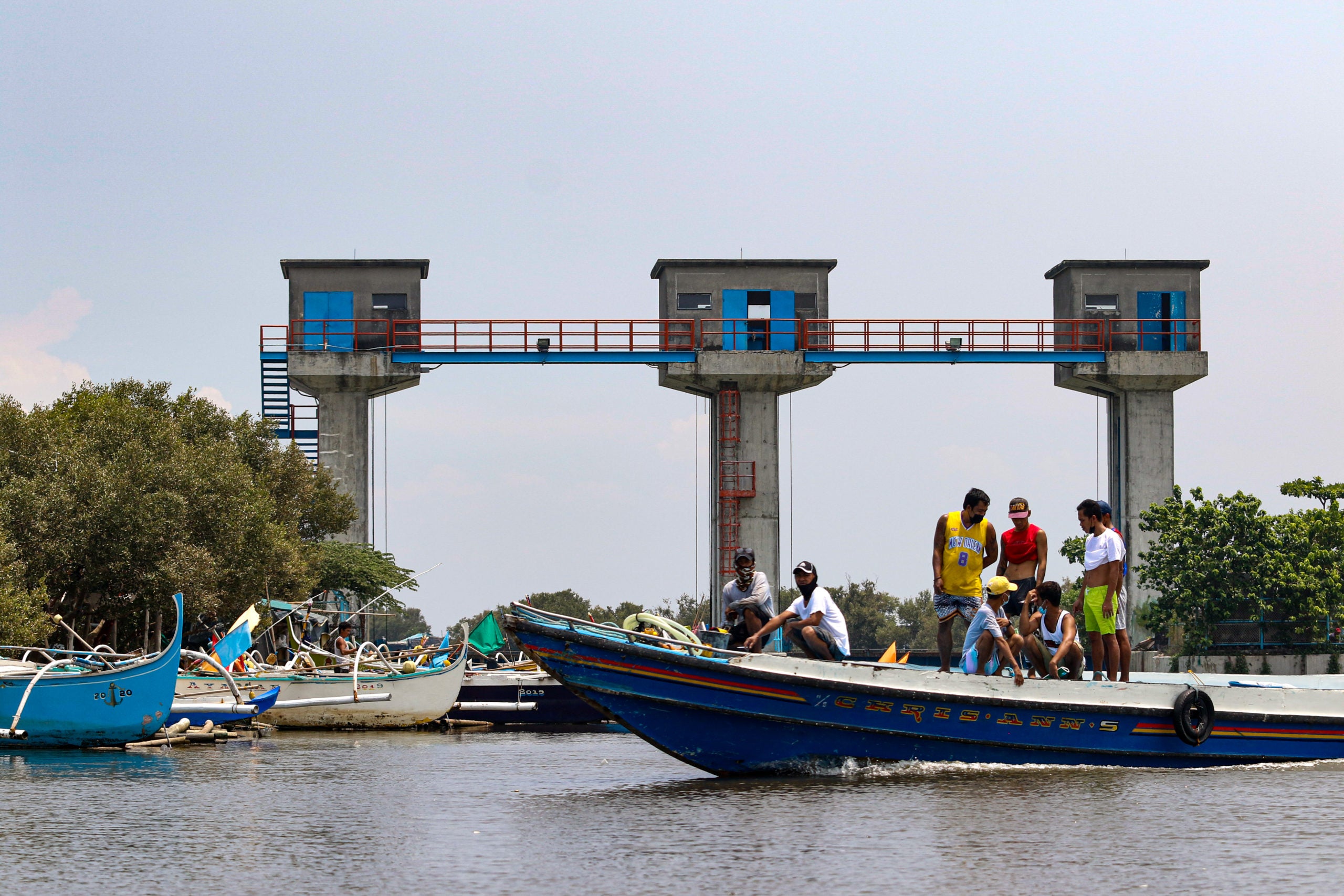 Fishers remain the backbone of the economy of Navotas City, a first-class highly urbanized city north of Manila, which faces Manila Bay. PHOTO BY AC DIMATATAC

Engineering approaches, such as the construction of sea walls and dikes, and flood control pumps, are necessary mitigations. But disaster risk experts say the government should be taken to task if the communities these measures seek to protect were displaced or alienated in the process.

Vonne Villanueva, the disaster risk reduction and management officer of Navotas, said the local government decided not to completely wall off the coast as that could affect the city’s more than 8,800 fishers. Several openings were made along the 3.7-kilometer coastal dike where fishing boats could pass to get to the bay.

With most fishing boats docked along the coastline and near the rows of fishers’ houses, the sea wall also protects these wooden outriggers against big waves, he added.

But Villanueva said they may have to close off the coastline completely for the seawall to be truly effective in protecting the city from the tides, floods and rising sea level.

“We really have to make a long-term plan for the fishers and their boats,” he said, noting that while nothing concrete had been decided, a quay or a marina could be constructed to serve as a harbor for the city’s fishers. 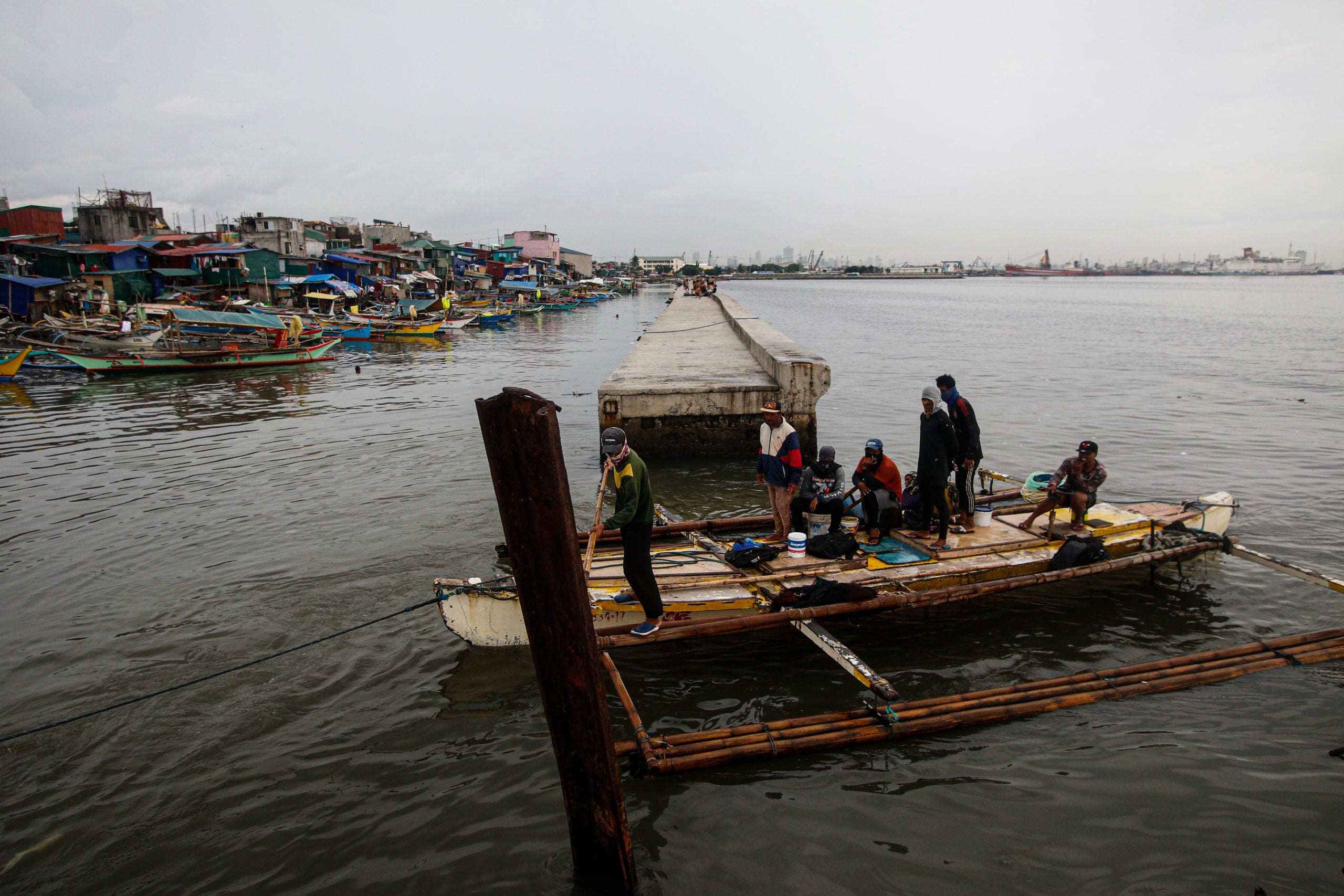 Several huge openings are seen in the 3.7-kilometer coastal dike that protects Navotas City from storm surges and also mitigates flooding in the city. These gaps were intentionally left to accommodate the fishers heading out to Manila Bay. PHOTO BY AC DIMATATAC

Nature-based solutions, such as planting mangroves to protect coastlines, should complement these engineering strategies, said Rosalie Reyes, who leads the Coastal Sea Level Rise Project Philippines that studied the sea level changes in the country’s coasts.

Unlike engineering solutions that provide immediate results, the benefits from growing the correct species of mangroves would take years to be realized, she said.

All these measures should be considered as parts of a system and should complement each other, according to Valenzuela and Constantino.

“We need to see Metro Manila as an organic whole, so that we don’t simply pass on the problems of one city to the other, which is the mentality that we’re currently seeing,” said Constantino.

To illustrate, he said authorities in one city could decide to raise their structures higher to escape flooding, but, “like a comedy,” the floodwaters would just go to the neighboring city.

While the retreat from the coast may eventually be an option, strategies to relocate coastal communities and those along waterways connected to Manila Bay should also be comprehensively studied, said Valenzuela. 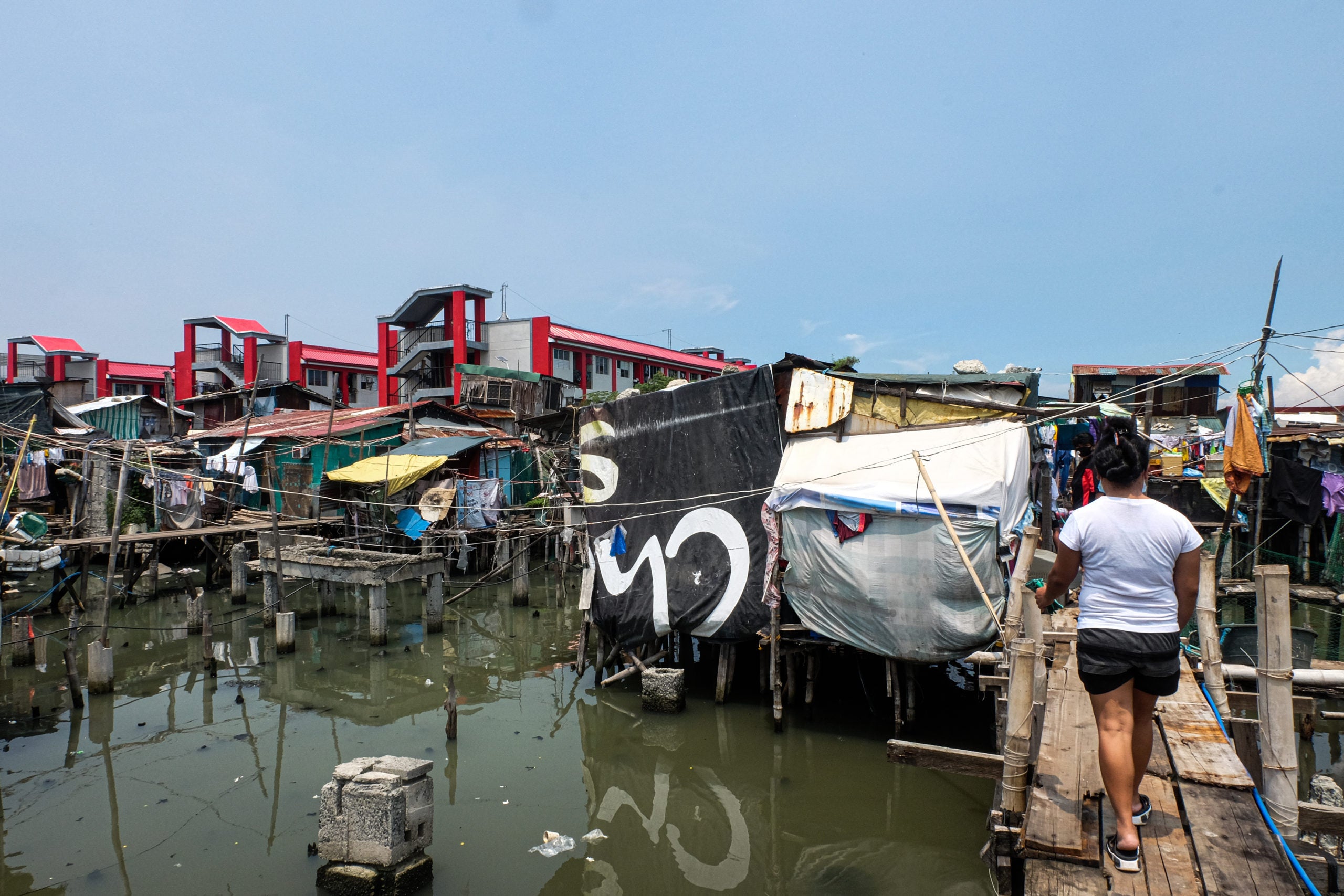 Several settlers in Tanza Dos in Navotas City built their shacks over Batasan River and put up makeshift bridges over the stagnant water to connect their houses to each other. PHOTO BY AC DIMATATAC

Vulnerable communities are often depicted as helpless in the face of hazards, but experts consider them valuable and perceptive partners with intimate knowledge of the changes occurring in their surroundings.

Valenzuela observed residents in Baseco Compound in Manila already adapting to seasonal hazards by raising their homes even higher in anticipation of bigger floods.

To these communities, however, rising sea level is a distant disaster and the people are “not as bothered with it as with the daily problems that they face,” he said.

That is why the local and national governments should raise their awareness and ensure that they can adapt to the worst that may come, said Mary Joy Gonzales of international humanitarian organization CARE Philippines.

“Our suggestion is for government officials to sit down with communities, enjoin them in dialogues and not just treat them as beneficiaries,” she said.

But it’s not something that can be accomplished overnight, and will require looking at climate change as something beyond an environmental or disaster concern, said Constantino.

“Addressing sea level rise is more than just about the invasion of saltwater in our irrigation or drinking water systems,” he said. “It will have a knock-on compounding effect across virtually all development indicators in the country.” 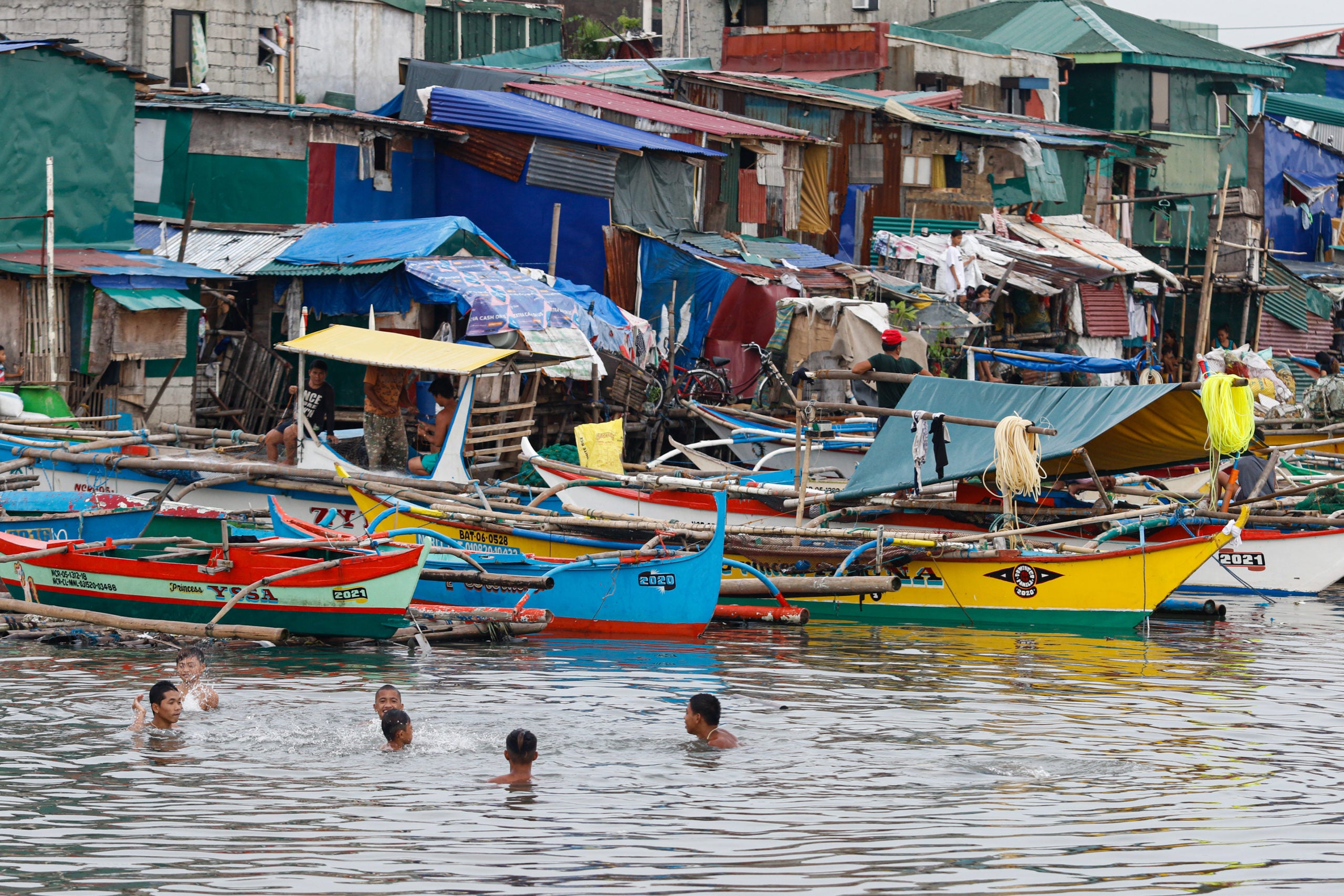 For Navotas residents whose homes are fronting Manila Bay, the sea is not only their source of livelihood, but a place to cool down after a long day. PHOTO BY AC DIMATATAC

This story was produced in collaboration with the Institute for Climate and Sustainable Cities, with the support of Internews’ Earth Journalism Network and Asian Center for Journalism.