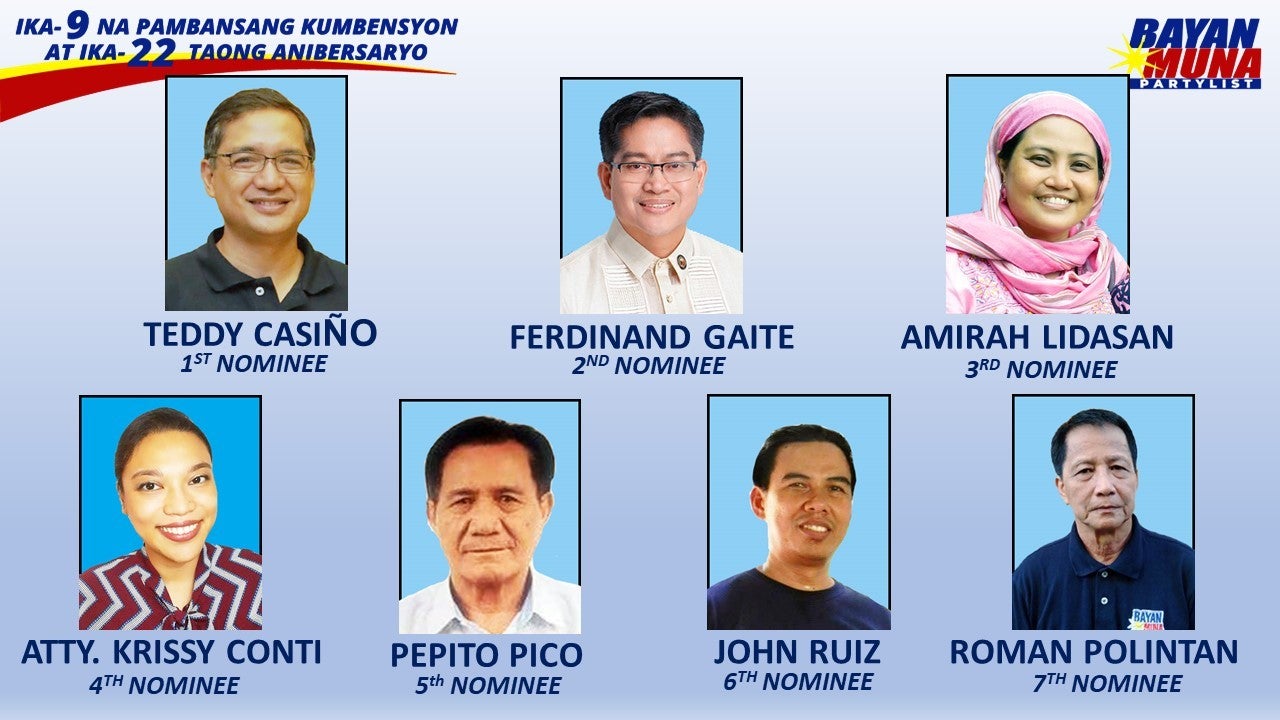 The nominees were revealed during the group’s celebration of its 22nd anniversary, as well as its ninth national convention.

According to Bayan Muna, it vows to keep and advance its position as a leading partylist group and secure three seats in the 2022 elections for the upcoming 19th congress “despite the attacks, vilification campaign and the challenges posed by the pandemic.”

The group’s first nominee is former Bayan Muna party-list Representative Teodoro Casiño, who was the former president of the College Editors Guild of the Philippines, and is the current  spokesperson of the Bagong Alyansang Makabayan (BAYAN), as well as its former secretary general.

The second nominee is incumbent Bayan Muna party-list Representative Ferdinand Gaite, who was also the former national president of the labor group Confederation for Unity, Recognition and Advancement of Government Employees (COURAGE).

The third nominee is the current secretary general of the Moro-Christian People’s Alliance Amirah Lidasan, who was also a SANDUGO convenor and former national president of the National Union of Students of the Philippines.

Pepite Pico is the fifth nominee, a former chairperson of both the Visayas-Inter Regional Ecumenical Fellowship and the Western Visayas Ecumenical Council, as well as the former secretary general of the Human Rights Alliance-Negros.

The last nominee is Roman Polintan who currently sits as the chairman of BAYAN-Central Luzon, and is also a regional director of the Bayan Muna partylist.

The first three nominees, according to Bayan Muna, will be the ones to take up the three seats if the partylist will be successful in securing it. In the event that one of the first candidates is unable to continue, the remaining nominees will serve as backups.

The partylist has also elected the following as its new officers:

Apart from this, Bayan Muna also endorsed the senatorial run of Neri Colmenares, its former representative.