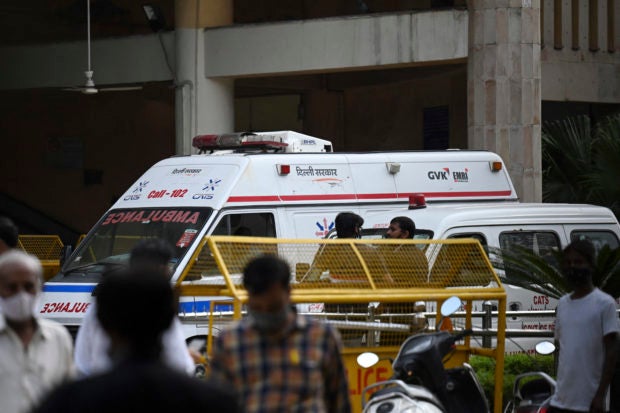 An ambulance is seen inside the Rohini court in New Delhi on September 24, 2021, after a notorious Indian gangster was killed by gunmen dressed as lawyers in a bloody shootout in a courtroom where three people died. AFP

Witnesses said about a dozen shots were fired during the battle in the courtroom. Gogi was hit up to five times before the fake lawyers were killed by police.

The gunmen were from a rival gang, police told reporters.

At least one of the two attackers was also on the Delhi police’s wanted list.

The gunfight erupted just after Gogi entered the court for a hearing on murder and other charges. He had been linked to at least 19 murder cases.

Mobile phone videos of the shooting showed lawyers and litigants running for their lives in the corridor outside the courtroom as gunshots rang out.

The gunmen wore grey suits and were posing as lawyers before they pulled out guns, police said.

“Two criminals opened fire at gangster Jitendra Mann Gogi when he was taken to the court for a hearing. In retaliation, police shot dead both the attackers,” said Delhi police commissioner Rakesh Asthana.

Questions were immediately raised about security at the Rohini court complex, which often deals with hearings of high-profile criminals.

Since his capture, Gogi’s protection had been placed in the hands of a police intelligence unit.

But some reports said metal detectors at the court entrances were not working and other security rules were not applied.

Delhi Bar Association president Sanjeev Nasiar said the deaths were “shocking” and told AFP that lawyers in all Delhi district courts would go on strike Saturday in protest at what he called “a high-level security lapse”.

“How can something like this happen inside the court? The police holds regular security review meetings with us and outsiders still managed to enter the premises with weapons,” he added.

Delhi police said only that an investigation would be held into the court’s security.

Gogi, who was about 30, had been linked to brutal gang battles, murders, robberies and extortion in Delhi and states across northern India.

His victims included a folk singer who had witnessed a murder and a teacher, as well as rival gang members.

He was first arrested in 2016 but escaped from police custody, and had evaded capture until last year.

Media reports said he had been in a murderous turf war with other gangs. Police said he had a particular rivalry with a gang leader known as Tillu for control of regions in northern India.

Tillu is also in custody but it was members of his gang who were killed in the court, media reports said.

The reports said about two dozen people had died in clashes between followers of the rival gangsters over the past decade.

Delhi police said Gogi and Tillu had first fought each other when they were students, reportedly around a student body election during which two people were shot, and that their enmity had escalated since.