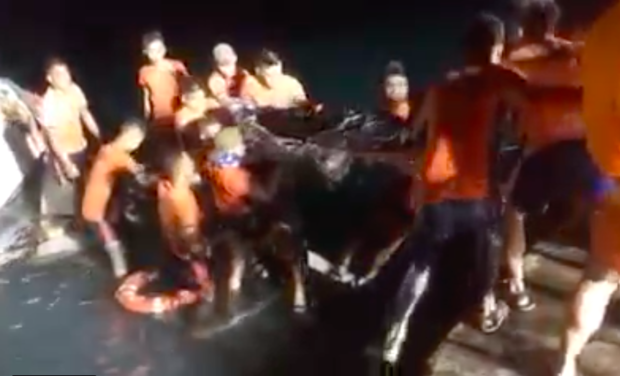 The Philippine Coast Guard (PCG) recovers the body of MV LITE FERRY 3 purser Raquel Alo who was reportedly trapped inside the vessel. The cadaver was transported to a funeral service provider in Ormoc City for proper disposition. Screengrab from Facebook / PCG.

MANILA, Philippines — A female crew member of a passenger ship died after the vessel capsized in Ormoc City, Leyte on late Friday night, according to the Philippine Coast Guard (PCG).

Based on the PCG report on Saturday, MV Lite Ferry 3 sank after having mechanical trouble while trying to dock at Ormoc Port around 11:50 p.m. on Friday.

“Upon arrival at the incident area, the PCG sighted that the said vessel was already on its starboard side (right),” the PCG said.

PCG has launched a search and rescue operation to rescue the 16 crew members of the distressed vessel. Fifteen of them were rescued, while the purser of the said vessel, identified as 33-year-old Raquel Alo, was reportedly trapped inside the ship.

The rescue team then found the body of Alo under several cargoes carried by the vessel. The body was turned over to the Ormoc City Scene of the Crime Operatives, then transported to a funeral service provider in the city.

Meanwhile, the 15 survivors were turned over to the Ormoc City Disaster Risk Reduction and Management Office for medical assistance.

The PCG has advised the captain of the said vessel to file a marine protest.

Viliran said they will be conducting further investigation as well as to secure the area for any possible oil spill.

The vessel, he said, was carrying 4,000 liters of diesel fuel.

In a statement, Lite Shipping Corporation said they are in close contact with the PCG in Ormoc City.

“At the moment, the vessel is partially submerged in tHe water. The company, together with the Coast Guard is still trying to investigate the cause of the incident,” it said.

“To our valued shippers and customers, we will be deploying a replacement vessel starting tomorrow to take (over) the Cebu City to Ormoc City route,” it added.