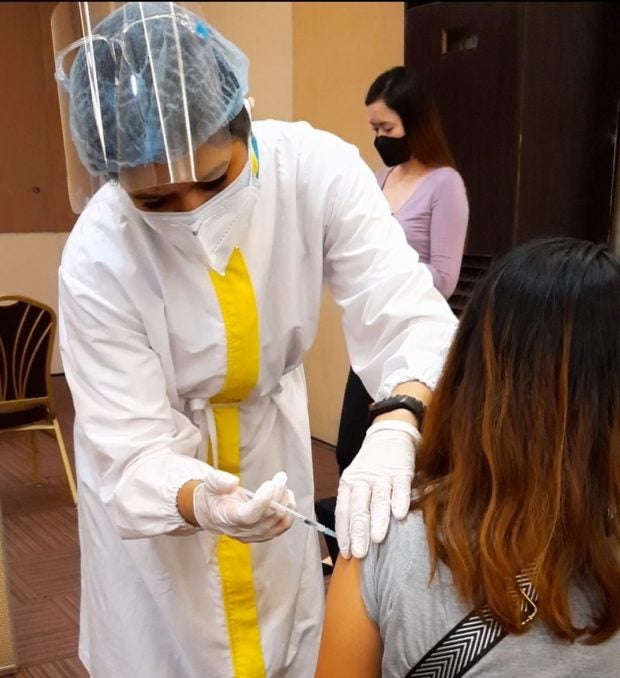 MORE JABBERS The Cebu City government continues its vaccination rollout in a hotel on Sept. 20 with more residents getting their jabs as COVID-19 cases in the city drop. —NESTLE SEMILLA

CEBU CITY, Cebu, Philippines — A total of 202 doses of COVID-19 vaccines in Cebu were wasted in the early part of the government’s vaccination rollout.

According to Dr. Mary Jean Loreche, spokesperson of the Visayas Vaccination Operation Center, the reason behind the wastage include “incomplete number of vaccines in a multidose vial, extraction technique by the aspirator, and vial issues, among others.”

She said there were instances when the vials were already opened but there were a few number of persons who showed up to get the jab.

The unused doses had to be discarded since they had to make sure the vaccines given to the vaccine takers were safe.

Of the 202 doses that were wasted, Loreche said 74 were recorded in Cebu province, followed by Cebu City (86), Lapu-Lapu City (three) and Mandaue City (one).

Dr. Van Phillip Baton, medical coordinator for infectious diseases of the Department of Health in Central Visayas, requested all governments in the region to immediately use their COVID-19 vaccines to avoid wastage.

“As emphasized by President Duterte, the COVID-19 vaccines are more precious than gold” and “any dose wasted is unacceptable” because the government worked hard to procure the life-saving jabs, he said in an online press conference on Thursday.

“We encourage our [local government units] to always consume their vaccines as soon as possible and not to store the vaccine for a longer period of time for this kind of eventuality, like power outage. The best way [is] to consume it as early as possible,” he said.

While the active COVID-19 cases in Cebu have continuously declined in the past two weeks, its neighboring areas in the Central Visayas region have noted a spike in infections.

Dr. Eugenia Mercedes Cañal, chief of the Regional Epidemiological Surveillance Unit, said the island province of Siquijor recorded a spike of more than 400 percent from Aug. 22 to Sept. 18.

From only 66 active COVID-19 cases in the past two weeks, Siquijor recently logged 361 infections.

On the other hand, the active cases in Cebu province have dropped by at least 42 percent after experiencing a surge in July and August.

Cases in Cebu City dropped by 43 percent while the highly urbanized cities of Mandaue and Lapu-Lapu saw a decline in active cases by 51 and 40 percent, respectively, she said.