Over P5M worth of marijuana seized at bus terminal in Pampanga 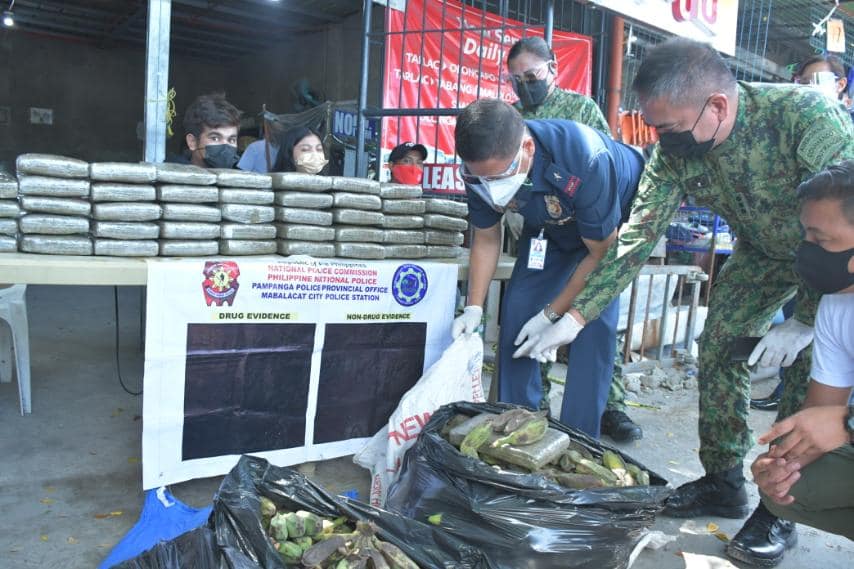 Police officials inspect the 44 kilograms of marijuana seized at a bus terminal in Pampanga province Friday. (Photo from the Police Regional Office 3)

MABALACAT CITY, Pampanga—Police arrested three suspects and confiscated Friday some P5 million worth of dried marijuana at the central bus terminal in Dau village in this city.

In a statement, the Police Regional Office 3 (PRO3) identified the arrested suspects as Lianna Jess Maigne Dela Cruz, 18, Jerthec Cris Lusung, 19, both residents of Sta. Teresita village in nearby Angeles City, and Filmar Lipasano, 44, of Balibago, also in Angeles.

Lt. Col. Soledad Elefanio, city police chief here, said her office received a call around 7:30 a.m. from Victory Liner bus company informing them that they found a big volume of marijuana inside two sacks of cargo. The cargo came from Tabuk City in Kalinga province.

Police in plain clothes were immediately sent to the bus terminal to wait for the cargo to be picked up.

After several minutes, the suspects arrived onboard a tricycle driven by Lipasano.

When Dela Cruz, the consignee of the cargo, tried to get the two sacks, she and her two companions were arrested.

Elefanio said personnel of the bus company accidentally discovered the 44 kilograms of marijuana.

“One of the sacks accidentally dropped, and some of its contents spilled onto the ground. They were shocked to see that aside from bananas, the sack also contained marijuana bricks, prompting them to call our station,” she said.

The PRO3 said the seized dried marijuana and fruiting tops have a street value of P5,280,000. It said the entrapment operation was conducted with the Philippine Drug Enforcement Agency-Region 3.

It said the suspects are facing charges for violation of the Comprehensive Dangerous Drugs Act of 2002.

As of press time, the Pampanga police were trying to find out who sent the two sacks via a Victory Liner bus.