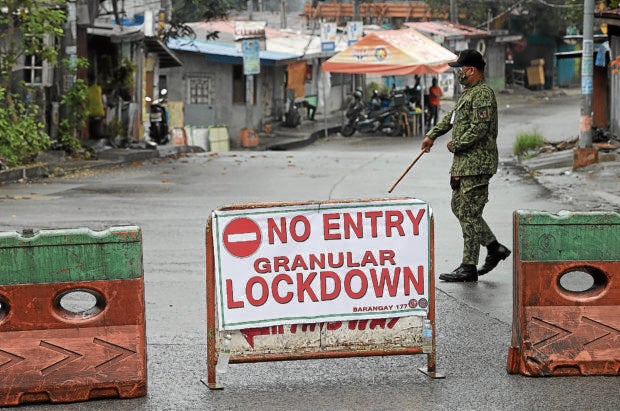 A police officer keeps watch on a section of Parkland Avenue in Barangay 177, Caloocan City, on Sept. 7, enforcing an example of a granular lockdown. INQUIRER file photo / NINO JESUS ORBETA

MANILA, Philippines — At least 220 areas across 82 barangays in Metro Manila are under granular lockdown as of Thursday, the Philippine National Police (PNP) said.

In a televised briefing on Friday, PNP chief Gen. Guillermo Eleazar said these specific areas under granular lockdown affect over 2,600 households in the region.

(As of yesterday, there are 220 reported places under granular lockdown. This is within 82 barangays in nine of the 17 cities and municipality in Metro Manila.)

Since the pilot alert level system in Metro Manila began on Sept. 16, Eleazar said authorities have accosted over 93,000 violators of quarantine rules with an average of 11,712 per day.

(This is lower than or average during MECQ where about 12,600 are accosted every day. But just the same, this 11,7000 for the past eight days remains high. 51 percent of them were given warning, 43 percent were issued tickets and 6 percent were brought to the police station.)

Still, Eleazar said the pilot of the alert level system in the region remains “generally peaceful.”

Read Next
No decision yet if only one Estrada will run for Senate, says JV Ejercito
EDITORS' PICK
This new condo in the South will make you want to turn a new leaf
Jonel Nuezca, convicted ex-cop, collapses and dies at Bilibid
Smart offers wireless fiber-like speeds to Filipino homes with country’s first 5G Prepaid Home WiFi
Google won’t accept election ads for 2022 national polls
House OKs bill allowing married women to retain maiden surname
Legarda: Ending Violence Against Women, a cause for all
MOST READ
Jonel Nuezca, convicted ex-cop, collapses and dies at Bilibid
Bongbong Marcos to face another disqualification case
Christine Bersola, Julius Babao cleared of cancer after colonoscopy, endoscopy
Tropical storm intensifies as it approaches PAR
Don't miss out on the latest news and information.