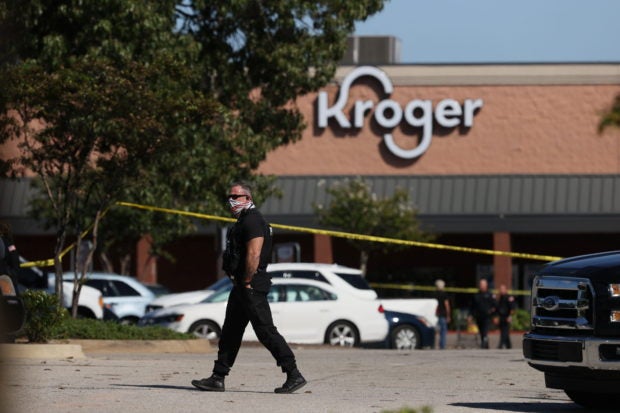 A gunman opened fire at a supermarket in suburban Memphis, Tennessee, on Thursday, killing one person and wounding at least 12 before apparently taking his own life, the police chief said.

Law enforcement officers swarmed to the scene just after the shooting unfolded at a Kroger grocery store in Collierville, Tennessee, and began helping victims and others found hiding inside the supermarket, chief Dale Lane told reporters.

“We found people hiding in freezers and in locked offices,” Lane said.

Live reports on local television showed a crowd of Kroger employees and customers standing outside the building after the shooting.

“I’m a little shaky but I’m OK,” Kroger employee Brignetta Dickerson told WREG-TV. “I got God on my side.”

The gunman, who was believed to have acted alone, was found dead of a self-inflicted gunshot wound in a parking lot outside the store, Lane said. Local media reported the suspect’s body was discovered inside his vehicle.

“We are waiting for some special equipment to search that vehicle as well as the property that is on him,” Lane said about two hours after the bloodshed, which erupted at about 1:30 p.m. local time.

He called the gun violence “the most horrific event that has occurred in Collierville history.” The town is located about 30 miles (50 km) east of Memphis in southwestern Tennessee.

No explanation for a possible motive was offered by authorities. Neither the victims nor the suspect were immediately identified.

Lane said some of the surviving victims sustained “very serious” injuries. All were taken to area hospitals, he said. WREG-TV said at least five were listed in critical condition.

Thursday’s violence was the latest in a string of deadly workplace mass shootings that have erupted in U.S. cities across the country, claiming dozens of lives and leaving many more injured so far this year.

Ten people were killed in March when a gunman opened fire at a supermarket in Boulder, Colorado.

Kroger, a major U.S. grocery chain, issued a statement offering “our thoughts, prayers, and support to the individuals and families of the victims during this difficult time.”