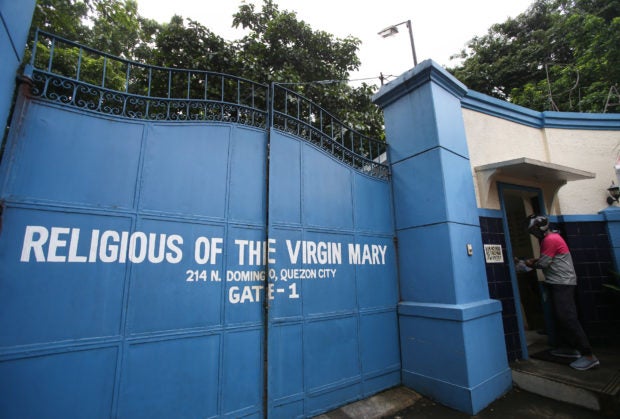 MANILA, Philippines — Eight of the 62 nuns who tested positive for COVID-19 in the Religious of the Virgin Mary (RVM) Convent in Quezon City had succumbed to the disease, the congregation’s spokesperson said on Wednesday.

In a report by Radyo Veritas, RVM spokesperson Sister Ma. Anicia Co said the eight nuns were 80 to 90 years old.

The religious compound was locked down on Sept. 14 after the nuns and 52 other staff contracted the virus.

“The personnel are still young so they are on the road to recovery. Some sisters are moving from symptomatic to asymptomatic,” Co said.

She asked for prayers for the congregation’s sisters who were still recovering.

“May God grant strength to our other sisters in the compound to continue serving the affected communities,” Co added.

The Quezon City government earlier said that none of the nuns at the convent were vaccinated because they had their schedule canceled.

However, Co said RVM had the first round of vaccination for its sisters in May and June, followed by the second round in July, but the eight nuns who died of COVID-19 were not vaccinated because they were already bedridden.

Within two weeks, the city government has placed under lockdown four religious compounds in Quezon City, including the RVM Convent, due to reported COVID-19 outbreaks in their facilities.

It identified the others as the Christ the King Mission Seminary, the Convent of the Holy Spirit and the Stella Maris Convent.

In Christ the King, the city government said a priest, who was one of two index cases recorded in the seminary on Sept. 3, died of COVID-19.

There were 25 of the facility’s 59 residents—nine priests and 16 employees—who tested positive for the virus, with 11 recoveries as of Sept. 18, according to the city’s epidemiology and disease surveillance unit.

The local government is making an inventory of all closed-setting facilities in the city, including convents, nursing homes, homes for the aged and rehabilitation centers, and is crafting guidelines on ventilation in buildings and workplaces to prevent COVID-19 outbreaks.

Meanwhile, the Department of Health (DOH) on Wednesday said it recorded 15,592 new COVID-19 infections, bringing the total case count in the country to 2,417,419.

The lower number of new cases could be due to the lower testing output of only 53,349 last Monday compared to the 73,904 daily average for the last seven days, the DOH said.

Four laboratories failed to submit their data on time, while 89 duplicate cases were removed from the total case tally.

In its daily case bulletin, the DOH said there remained 162,580 active cases or currently sick individuals, of which 92 percent were mild cases, 0.7 percent in critical condition and 1.5 percent severe cases.

The positivity rate was at 24.9 percent, meaning nearly one in four of the 53,349 tested on Monday was positive for the virus.

Independent pandemic monitor OCTA Research Group fellow Guido David on Wednesday also noted that the COVID-19 reproduction rate in the National Capital Region (NCR) has gone down to 1.03 for the period Sept. 15-21, down from the 1.11 reported on Tuesday, and 1.22 a week ago.

The reproduction number refers to the number of people that a person positive for COVID-19 can infect.

David said that the one-week growth rate in the NCR was likewise at negative 18 percent.

Earlier, David said in a forum that he was very optimistic that the Philippines was at the end game of the Delta variant since cases were starting to decrease.

In its latest monitoring report, OCTA also said that Isabela, Cagayan and Benguet were provinces of concern as these had areas with the most number of new cases from Sept. 15 to 21.

In its Wednesday update, the group said Isabela experienced a 158-percent growth rate in cases, while Benguet had 29 percent.

While Cagayan had a negative 1 percent growth rate, its average daly attack rate—or the number of new daily cases for every 100,000 population—was at 37.79 percent. This, coupled with the province’s 87 percent hospital and ICU bed usage, prompted the group to include it in the list of areas of concern.

TAGS: nuns with COVID-19, Religious of the Virgin Mary