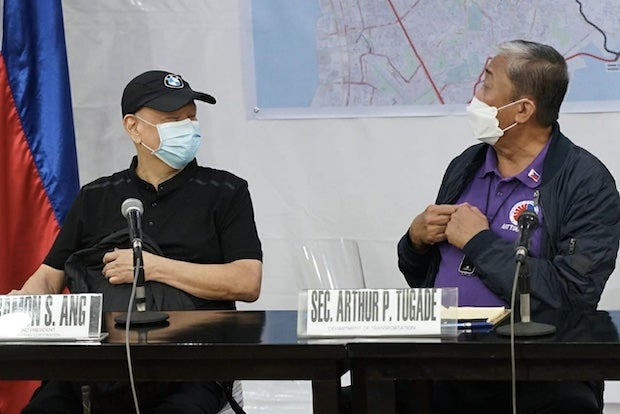 PASAY CITY, Philippines – Transportation Secretary Arthur Tugade is a popular choice as a senatorial candidate in the 2022 elections, according to Ramon Ang, the president and COO of San Miguel Corp (SMC).

Ang made the remark in answer to a question at a press conference held on Tuesday after the signing ceremony of the Supplemental Toll Operation Agreement (STOA) for the Pasig River Expressway (PAREX).

“With all the performances exhibited by Secretary Tugade in the DOTr, do you think, he will be a good fit in a Senate seat?” Ang was asked.

“You know, that’s true. Secretary Tugade is very much needed in the executive branch of the government so that he can implement all these [projects],” Ang said, speaking in Filipino.

“But then the people are asking him to run [for senator] and continue his service to the country. I think he is fit to be president of the Philippines,” he added.

He then cited the accomplishments of the Department of Transportation (DOTr) in the last five years under the helm of Tugade.

Apart from the PAREX, SMC has been partnering with the DOTr for the delivery of various transport infrastructure projects. These include the construction of the massive New Manila International Airport in Bulacan, the MRT 7, and the implementation of electronic toll collection.

“Maybe you have noticed that, before we got here, I met with Mr. Ramon Ang,” Tugade told reporters covering the signing ceremony. “I told him that I would need his help so that there more projects that need to be started and finished — like the MRT 7. Then there’s the  Bulacan International Airport that will become world-class and give a top-of-the-line performance. There are the tollways that we are constructing.”

Meanwhile, to settle the question on the possibility of him seeking a Senate seat, Tugade said his focus at the moment was on finishing the various transport development projects of the DOTr.

“Let’s just cross the bridge, as they say, when we get there,” he said. “But in the meantime, my priority is putting into place the projects which we could finish, can finish, and should finish within this very limited time,” Tugade said.