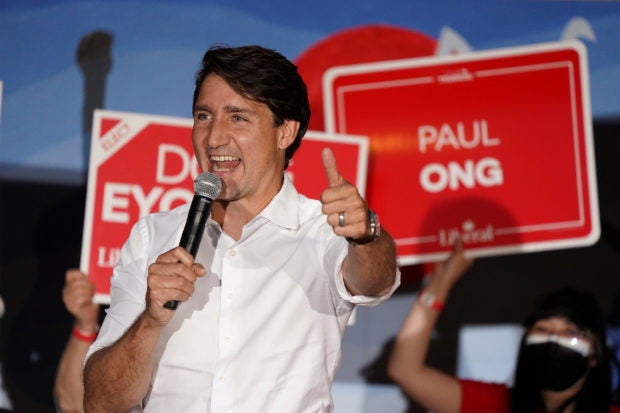 OTTAWA  – Canadian Prime Minister Justin Trudeau failed in his bid to win a Liberal majority government after a low-energy campaign in the middle of the pandemic, and party insiders see an increasing chance he will step down before the next vote.

Trudeau, 49, called Monday’s election two years early seeking to benefit from his government’s handling of COVID-19. But provisional results showed he came away with another minority administration, which will once again force him to work with opposition legislators.

Four senior Liberals said there was no sign of a coordinated move to oust Trudeau, who has imposed tight control over a party known for previous bouts of infighting.

But coming up short of his goal in his third election cast immediate doubts on the future of his leadership and could spur him to leave of his own accord. No prime minister for more than 100 years has won four consecutive elections. Trudeau’s father tried and failed in 1979.

“This is his party at this point, we are his party,” said a Liberal who helped run the campaign and requested anonymity given the sensitivity of the situation.

“I’m not sure if I were him I’d want to run again … you don’t really want to wear out your welcome to such an extent that your successor gets trashed in the next election.”

Trudeau, a charismatic progressive and son of former Liberal Prime Minister Pierre Trudeau, swept to power in 2015. After six years in office, however, voters looked at the Liberal leader with fatigue.

Trudeau decided to call a snap vote after opposition legislators blocked his budget and other bills during a charged June session, three well-placed sources said.

“The events of June made clear we had to go to the polls in the summer. It was just too painful – we couldn’t go through that again,” said one Liberal.

But from the day Trudeau made the call on Aug 15, he had trouble dealing with opposition accusations that it was a power grab.

“There was a recoil (by voters). Trudeau said ‘I have good numbers. I can go into an election,’ not realizing that he had good numbers because there was no election,” said Philippe Fournier, analyst at the 338.com political website.

Other insiders said Trudeau and his inner circle had failed to realize that the people they would need to run the campaign were exhausted after 15 months fighting COVID-19.

Half way through, a second Liberal said campaign workers were “just so tired, they don’t care if they win or lose.”

In response, Trudeau spokesman Cameron Ahmad said “campaign staff worked incredibly hard every step of the way, as they always do.” He did not address questions about Trudeau’s future or whether the early election call had been a mistake.

One senior strategist said canvassers knocking on doors were picking up unhappiness with Trudeau.

“These first two weeks are just froth, there’s nothing to it. Nobody’s paying attention much,” said a third Liberal.

Asked about the minority, the first Liberal said: “it is what it is .. Canadians decided that’s what they wanted.”

Among the public, Trudeau himself generated more fatigue than excitement.

“The problem was that right from the start, we never came up with a good answer to the obvious question of ‘Why are you calling an unnecessary election in the middle of a pandemic?'” a Liberal strategist said towards the end of the campaign as it became clear a majority was not on the cards.

After the election, Liberals sketched out a possible scenario whereby Trudeau would make clear he intended to keep the government alive for at least three years, giving him time to focus on priorities such as child care and battling climate change while pondering his future.

Trudeau is due to speak publicly this week and could offer details on what he is planning.

A senior adviser and a senior lawmaker said Trudeau did not want to be in power forever, but would fight a fourth campaign if the government falls before he can push through significant parts of his agenda.

Minority governments usually last about 18 months but in theory can last four years if no-one brings them down.

Trudeau, who has three young children, became a Liberal legislator in 2008 and took over the leadership in 2013 at a point when its future looked dark. Two years later he became the first Canadian leader to ever take a party from third place to victory.

“I wouldn’t be surprised if this was Trudeau’s last election .. winning three back-to-back is hard,” said Tamara Small, professor of Political Science at the University of Guelph.

The Conservatives, who have now lost three consecutive elections, may again end up seeking a new leader.

Although the Conservatives won more of the popular vote than the Liberals for the second consecutive election, Trudeau’s lock on Toronto ensured he ended up ahead.

The Liberals and the New Democrats led by Jagmeet Singh – who favors heavy spending on social programs – have a comfortable majority in the 338-seat House of Commons.

Waiting for her son to speak after falling short of his majority goal, his mother Margaret Trudeau, with whom he is very close, was confident a minority government would work out.

“You don’t want too much power to end up anywhere, do you?” she told reporters. “I know that Jagmeet is a wonderful man, compassionate like Justin.”