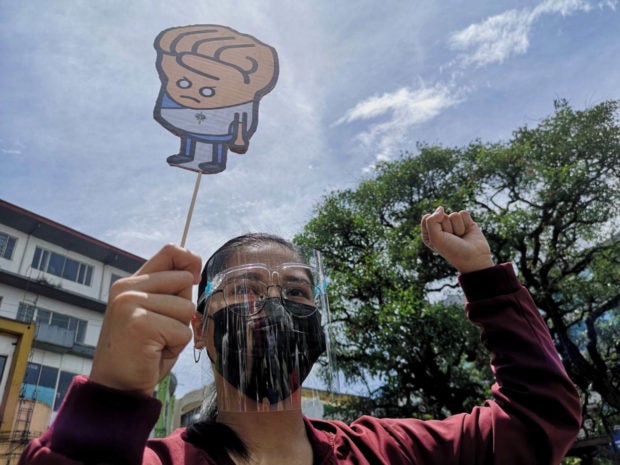 NEVER TOO YOUNG Protest actions marked the commemoration of the declaration of martial law in the country, including one staged by students at Baguio’s Malcolm Square on Tuesday. (Photo by EV ESPIRITU / Inquirer Northern Luzon)

MANILA, Philippines — On the 49th year of the signing of the martial law declaration, Vice President Leni Robredo urged Filipinos not to be silent amid attempts to revise the dark chapter in the country’s history and whitewash the atrocities committed under the dictator Ferdinand Marcos’ rule.

In a statement, Robredo said it is necessary to keep repeating the truth about these abuses, especially with Marcos descendants clawing their way back to national posts decades after they were removed from power through the Edsa People Power Revolution in 1986.

“Marcos is a dictator, and he has not been held fully accountable for his crimes,” she said. “In fact, his clan continues to benefit from the wealth that they have stolen from the public.”

During the martial law regime, Marcos and his family plundered billions of pesos from public coffers, while plunging the country in debt. The Presidential Commission on Good Government (PCGG), created more than three decades ago to recover the family’s ill-gotten wealth, is still running after P125 billion stolen from the nation’s coffers.

‘Platforms can be bought’

Robredo, who defeated Marcos’ son and namesake Ferdinand “Bongbong’’ Marcos Jr. by a slim margin in the 2016 elections, said there were clear attempts to rewrite the atrocities under the martial rule, which was marked by thousands of extrajudicial killings and enforced disappearances.

“Memories fade, and sometimes, platforms can be bought and stories can be erased,” she said. “If we keep quiet, if we do not keep telling the narrative in our own spaces, money and power will dictate our history.”

Activists on Tuesday also demanded the return of public funds stolen by the Marcoses, and decried their attempts to get back to power.

“[We take] the occasion to raise, once more, the call demanding the return of the Marcoses’ illegal wealth, and that they be made accountable for their crimes of plunder… and for the human rights violations during the 14 years [of] the Marcos dictatorship,” said the Campaign Against the Return of the Marcoses in Malacañang.

Apart from the Marcoses’ continuing influence in their strongholds in Ilocos Norte and Leyte provinces, the dictator’s children remain active in the national arena. Imee Marcos is a sitting senator after being elected in 2019. Bongbong Marcos was elected in the same chamber in 2010. After losing to Robredo in the vice presidential race six years ago, he is again planning to seek a national position in next year’s elections.

Martial law survivors also slammed the parallelism between the Marcos regime and President Duterte’s administration, saying the latter has been zealously following the path of the former.

“The nation is again living in such dark times, even darker to what we endured under Marcos’ rule,” said the Samahan ng Ex-detainees Laban sa Detensyon at Aresto (Selda).

Academics said educational institutions face the challenge of ensuring that the country never forgets its dark history, and learns from it.

“We, as a nation, have apparently been experiencing historical amnesia, and have failed to truly take stock and reckon with its lessons,” said Ateneo de Manila University in a statement.

“We owe it to those who sacrificed their lives, those who fought the darkness so that we may live freely. We owe it to the succeeding generations of Filipinos, so that they may never ever experience it,’’ it added.

“Today’s news and stories become tomorrow’s history. Marcos’ allies, disciples and nuclear family members have regained their positions and power. And they are reconstructing history,” the Journalism Studies Association of the Philippines said in a statement on Tuesday.

For its part, the Alliance of Concerned Teachers renewed its commitment to fight the Marcoses’ efforts to rewrite history.

“As educators, we have the power and obligation to ensure that present and future generations know of the atrocities committed by the Marcos family and their cronies against the Filipino people as proven in various courts and in the lives lost and ruined in their 14-year reign,” the militant group said. INQ