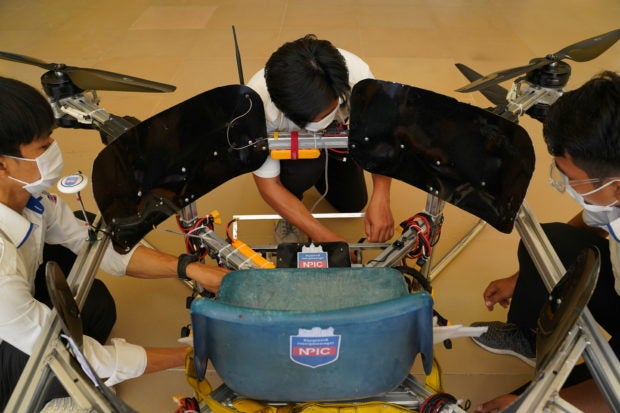 Students of the National Polytechnic Institute of Cambodia prepare their manned drone for flight, in Phnom Penh, Cambodia, September 17, 2021. REUTERS

PHNOM PENH — Inspired at first by a desire to beat their city’s notorious traffic, a group of Cambodian students have designed a prototype drone that they hope can eventually be used to ferry people around Phnom Penh and even help fight fires.

With eight propellers and using a school chair for the pilot’s seat, the drone was developed by students at the National Polytechnic Institute of Cambodia (NPIC) on the outskirts of the capital.

“The drone, when we see it flying without a pilot, there is a lot of shaking but when I sit on it and fly… it becomes more stable and I feel so excited,” said Lonh Vannsith, 21, the pilot of the drone.

“We wanted to solve some problems for our society by making a taxi drone and… inventing drones for firefighters,” he said, noting how, for example, they hoped it could reach the upper floors of a building to bring a hose where a fire truck could not reach.

While the team hopes it will eventually fly far higher, when manned the drone currently only rises to as much as 4 meters (13.1 feet).

The project faced delays because of lockdowns during the COVID-19 pandemic and also as components like the propellers and the frame had to be ordered abroad, said Sarin Sereyvatha, who is NPIC’s head of research and development technology.

The team plans to improve the design to allow it to take more weight, as well as fly further and more stably at a higher level.

“In principle, if we make one drone, the cost is expensive but if we make them to sell on the market, the cost will go down,” said Sarin Sereyvatha.