Biden bids to renew US leadership in UN speech 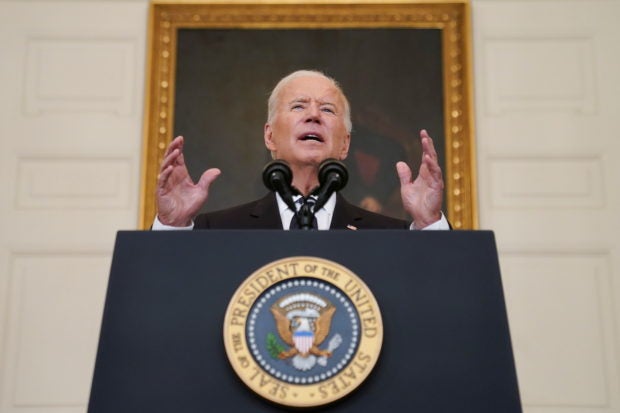 U.S. President Joe Biden delivers remarks on the Delta variant and his administration’s efforts to increase vaccinations, from the State Dining Room of the White House in Washington, U.S., September 9, 2021. REUTERS FILE PHOTO

UNITED NATIONS — President Joe Biden will tell the world Tuesday that the United States wants to avoid a Cold War with China, while pivoting from continuous post-9/11 conflicts to an era of US-led diplomacy.

Biden’s first speech as US president to the annual United Nations General Assembly in New York faces a tough reception.

He has spent his presidency branding countries like China and Russia as the opposing side in a generational, global struggle between autocrats and democracies.

Close ally France is also furious at what it calls backstabbing by Washington in a defense pact that will see Australia acquire US nuclear submarine technology, while ditching previous plans for French conventional submarines.

Throw in the hangover from the traumatic Afghanistan exit — where victorious Taliban guerrillas forced the US-led alliance into a hasty, at times chaotic, withdrawal — and Biden can expect some skepticism.

However, Biden will argue from the UN rostrum that the United States is stepping in to save the world from the Covid pandemic, leading on climate crisis measures and rebuilding democratic ties frayed under Donald Trump.

And he will insist that his drive to deepen the US footprint in Asia — the new nuclear submarines pact with Australia is only the latest building block — doesn’t have to mean confrontation with China.

Biden will say “he does not believe in the notion of a new Cold War with the world divided into blocks. He believes in vigorous, intensive, principled competition,” a senior US official said, speaking on condition of anonymity.

Reinforcing that theme of a United States wanting to turn the page on two decades of conflicts, Biden will vow a shift to diplomatic leadership, the official said.

Biden will not be the only leader making his first appearance before the United Nations.

Iran’s new ultraconservative president, Ebrahim Raisi, will make his international debut with a pre-recorded speech, possibly offering clues on whether a 2015 nuclear accord can be salvaged.

The summit will kick off with Brazilian President Jair Bolsonaro, a far-right leader who insisted on flying to New York despite refusing guidance that he be vaccinated against Covid.

Biden’s speech will stress US pledges in tackling both the pandemic and climate change.

A UN official signaled Monday that Biden would deliver “good news” on resolving a $20 billion shortfall in the $100 billion fund that developed countries promised to mobilize annually from 2020-2025 for helping poorer nations adapt to climate change.

On Covid-19, Biden will likely recall that the United States is easily the biggest donor of vaccines around the world, while acknowledging that considerably more needs to be done before vaccine imbalances can be ironed out. Many African countries, for example, have got only a trickle of their populations fully vaccinated, and international donations are nowhere near enough to change the dynamic.

On Wednesday, Biden will be hosting virtually from the White House a global summit on the pandemic response.

He will “call for an all-hands-on-deck effort that can end this pandemic much more rapidly,” the US official said.

Ending a busy diplomatic week, Biden will also meet Friday in the White House with the leaders of Australia, India and Japan, which join the United States in the Quad alliance at the heart of the Indo-Pacific.

While maneuvering through this week’s multilateral mazes, Biden will have to keep one eye on trying to mend bridges with France.

Paris recalled its ambassador to Washington in fury at the US-Australian submarines deal, and the French foreign minister has described Biden’s diplomatic style as “brutality.”

The White House appears confident it can calm the spat, while keeping focused on what it says is the main issue: shoring up regional networks to resist China’s growing military and commercial footprint.

On Monday, the US government satisfied a key European demand by easing a travel ban imposed at the outset of the Covid-19 pandemic. From November, anyone fully vaccinated will be allowed to fly into the United States.