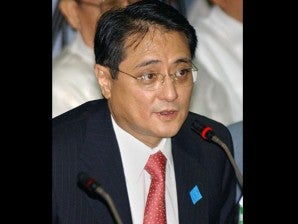 The annulment of the late Rep. Ignacio “Iggy” Arroyo’s marriage to his first wife was never registered in Quezon City, a local civil registrar said Monday.

Thus his subsequent marriage to Alicia Rita “Aleli” Morales must be null and void, said the lawyer of Arroyo’s mistress, Grace Ibuna.

This went against the Family Code, De Vera said.

“There was no compliance with registration rules under the Family Code,” he told reporters after a hearing before Judge Eleuterio Bathan of QC Regional Trial Court Branch 92.

Aleli’s lawyer Lorna Kapunan countered this, saying the marriage annulment may have been registered somewhere else.

“It could be that the annulment was registered in Pampanga because it was a Pampanga court that granted the annulment,” said Kapunan in an interview.

The QC court is hearing a petition for a temporary restraining order by Aleli against Ibuna over custody of Arroyo’s remains.

Arroyo’s body is still in London nearly a month after he died there on January 26.

Kapunan said Aleli and Iggy Arroyo had a valid marriage license issued in 1994.

Matabang was summoned to testify on Monday on a certificate his office had issued indicating it had no record of the annulment of the late lawmaker’s marriage to Jacinto.

Aleli, who maintains that she is the widow since the annulment of their marriage was never completed, is locked in battle with Ibuna, who was with Arroyo when he died, over the remains.

Last week, Aleli lodged an urgent petition for custody of her husband’s body, seeking a TRO and injunctions against Ibuna and several others.

Aleli said that under the law Arroyo’s body should go to her.

De Vera, however, said Arroyo had left instructions that Ibuna would have responsibility over his remains and assets.