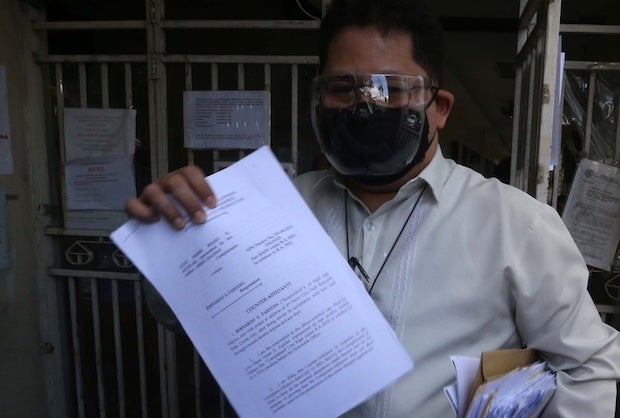 Lawyer Antonio Luis Paredes shows the counter-affidavit filed by Cavite City Mayor Bernardo Paredes in a rape complaint filed at the Office of the City Prosecutor in Mandaluyong. (Photo provided by the lawyer)

MANILA, Philippines — Political opponents are behind a “fabricated” rape complaint filed by a 17-year-old girl against Cavite City Mayor Bernardo Paredes, the legal counsel of the officials, Antonio Luis Paredes said in a statement sent to INQUIRER.net on Monday.

“The reason is more apparent than real. Clearly, the complaint is premeditated, well-planned, and politically motivated,” Paredes said quoting from the mayor’s 11-page counter-affidavit filed at the Office of the City Prosecutor in Mandaluyong.

“Complainant is being supported by a rich and powerful politician who intends to destroy my reputation as Mayor of Cavite City from the years 2001 to 2010 and 2013 to 2021,” the document said.

Paredes, who did not identify the mayor’s political opponents, noted that the complaint was filed just a few months short of the 2022 elections.

“The filing of the instant complaint was timed during the election season. The mayor’s political opponent was reportedly even bragging that by reason of this case, his suspension as mayor of Cavite City is forthcoming,” the lawyer said.

“It took the complainant a period of almost three years and eight months to file the instant complaint in Mandaluyong City,” Paredes said.

Paredes stressed that the sexual abuse allegations made by the complainant were not only “contrived, fabricated, malicious, and gratuitous” but also “false, invented and malicious fabrications.”